Oracle of Ybor: When it comes to divorced parents’ messy finances, all a fool can do is cry into a gin at The Hub

My question is: How involved should I be? 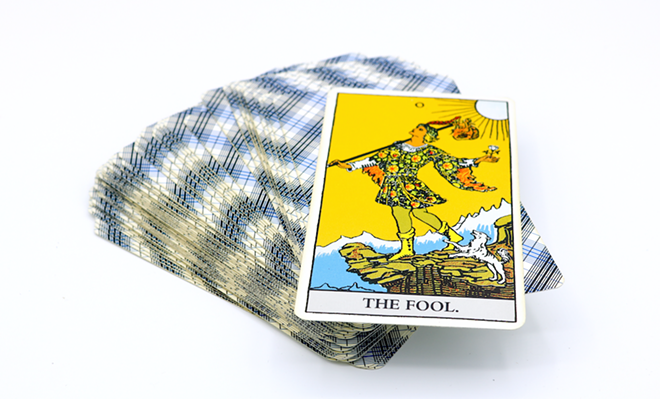 Dear Oracle, I'm in my early 30s, and my parents have recently separated. They have decided to keep their finances joined, which is driving them, and me, fucking bonkers. They argue about bills, who's responsible for what, and all the things they are entitled to. I'm pretty worried that one or both of them might do something shortsighted (dumb/selfish) that could adversely affect them both financially, which is the last thing I want.

My question is: How involved should I be? I'm in a position where I could take control of most of their finances and ensure that they both can live fairly comfortable lives. Still, I'm worried about the very real possibility that their anger and frustration with each other will just refocus on me, and I'll be the bad guy. I don't want to be in the position of parenting my parents, but part of me feels like that might be the best option. What should I do? —Swell intentions

Swell, this is a problem big enough that three major arcana decided to join the party, with the only minor arcana being the Nine of Pentacles—the well off individual.

Let's look at our players. The first card in the spread is the Fool reversed. Of course, this is driving you bonkers because this is a maddening process. The Fool is a tricky card. It doesn't have a number, so it's outside the story of the Major Arcana. It's both a great sign of "beginner's mind," of an open-heart, of a leap of faith—it's heart over mind—but it can also be a sign of recklessness, naivety, and, well, a fool's errand. Typically, I read reverses as something that either hasn't happened yet or something that's been going on for longer than six months. I have to imagine that your parents' finances aren't a new worry for you; from the letter and the cards, I get the impression that this has been going on for years.

You say you're in a place where you could control both of their finances, but you don't mention if either one asked you to. Are you worried that the Nine of Pentacles (whichever parent that is) is being greedy? Do you worry they're being taken advantage of? Has either party expressed this concern to you?

From your letter, it sounds like you very much want to help out by being a neutral third party as if that could take the emotions out of it.

But the emotions will be there regardless of what you do. The next major arcana we have is The Tower. I'll be the first to admit that The Tower gets a bad rap as being THE bad omen card, and while the truth is more complicated than that, it's gotten that rep for a reason. It's a symbol of Big Messy Change; it's a world exploding, a sense of chaos and anger and feeling untethered. It's hard not to see this card in the context of this question as being hostility and earth-shaking change. In French, the Tower is La Maison Dieu, the House of God, and the image is typical of the Tower of babble falling. This is God's house, son. It is well above your Fool's pay grade.

The Tower's change is a dramatic one—much like a divorce. You say you're in your early 30s, meaning if your parents were together for at least as long as you've been alive, that's a substantial amount of time. Losing a partner after that long together probably does create a feeling of world-ending chaos. An end of a relationship is a death; mourning is expected. And not all mourning is crying into your gin at The Hub. Sometimes it's exploding anger and viciousness.

So what's a Fool to do? Nothing. And deep down, you knew that. The High Priestess is divine knowledge and wisdom; it's also your intuition. Even if you were asked to solve this problem, you might not be able to. It might just be on your parents.

It's hard to watch people we love suffer. It's especially hard as a child to watch the parents you love hurt each other or themselves. However, even if you can't take care of them, you can take care of yourself. I really encourage you to find someone to talk to about this, be it a counselor or a clergy member, or a support group. Their pain does not lessen if you take it on. Be safe and good luck!

I know it's a stressful time right now, but I still can't help feel like I'm not productive enough. I want to transfer from my day job to my creative field full time (where I have a degree in and have spent a lot of time working towards it), but I feel so drained after work that I'm not making a lot of art. I see others "hustling," and I try, but I'm exhausted and creatively blocked a lot of the time. I'm so scared that I won't "make it," and I'll die from COVID-19 in obscurity. Any advice on how to be more productive? —Panicked or lazy?

POL, listen, you're a hard worker. Page of Pentacles shows that. And Ten of Pentacles indicates that you will eventually master whatever career it is you're working towards. But for Christ's sake, kid, we're in the middle of a pandemic—go easy on yourself! Plenty of creatives are feeling drained. Right now, you should show yourself a good time and rejoice. Really. Six of Wands is a celebration after the conflict breaks. You have to give yourself some respite. I know it sounds Pollyanna-ish, but despite the horrifying world, try to find a way to rejoice. Rejoice at the health of your friends/family, at your dog's sweet face, at your creative brain, at the fact that you're amazing and alive and awake.