For all who love weddings, honeymoons and vampire babies...

If you are just joining us in The Twilight Saga, you have missed a lot. In short, Edward (Robert Pattinson) is a vegetarian vampire … which makes zero sense but it just means that he and his family, the Cullens, don't suck people blood, and he is in love with Bella (Kristin Stewart), who is human but wants to be a vampire. Her BFF is Jacob (Taylor Lautner), and he is a Native American whose tribe has a bad history with the vamps, and when there are too many of them around the kids start to turn into werewolves, so clearly Jacob is a werewolf now. The wolves have a treaty with the Cullens, though, because of the vegetarian deal, so they try to stay all civil. Oh, and Edward and Bella are engaged and he promises to turn her into a bloodsucker too once she lets him put a ring on it. Welcome to Breaking Dawn - Part 1. The book was so chock-full-o-madness they had to divide it into two movies just to cut down on all your WTF moments.


Breaking Dawn - Part 1 essentially starts with the most beautiful wedding in the history of the world, with Bella Swann in the worst dress ever. Seriously, if long-sleeved gowns are back in style, count me out. Besides that, the wedding was fab and I dare any Twihard to argue with me on that. It was way better than what I could have imagined from Stephanie Meyer's epic description. Most Twilight fans were waiting for exactly one thing, the honeymoon, and you know what that means.* Welp, you might be disappointed, cuz it was pretty tame. Then again, this is a PG-13 movie so what were you people expecting? Use your imagination, that is why God gave you one. Duh.


Now get your mind out of the gutter and join me as you imagine what you would do if you were impregnated by a vampire on your honeymoon and you are fairly certain that whatever is growing inside of you is some sort of mutant, vampire-human cross-breed. Bella does exactly what any logical person would not do. After all, this is the girl who is all about about becoming a vampire; she is not the world's best decision maker. Her choice to keep the babything causes quite the rift amongst vampires and werewolves alike and chaos ensues.


Know that by chaos, I mean many things … like ummm, I don't know, an entire scene in which the werewolves use their telepathy or whatever the hell it is to communicate, and for some reason the filmmakers chose to show us these wolves and let us hear the conversation. That sounds WAY less insane than it played out on the screen, trust me. It was kind of like being in an animatronic ride at Disney with these furry animal things looking at each other while a bunch of creepy voiceovers happen. This description still does no justice to how effing dumb it was. Go see the movie so you can understand what I am going through right now and report back with your reaction.** I just want to scream "I WANT TO LOVE YOU TWILIGHT, WHY MUST THOU FORSAKE ME!?" Or something. I just want these movies to stop being so ridiculous, ok, please? … please?


In the aftermath of that specific chaos come some pretty tense fight scenes, a bloody birth that made me literally curl up in a ball and vow to never have a (vampire) baby of my own and of course, "monsterkid." End Scene.


One of the biggest complaints about the Twilight films is the acting, or lack thereof. This, my friends, has seen little improvement through the years*** so don't expect an Oscar nod for R-Patz anytime soon. The good thing is, the wolves look a lot more like dogs and less like bears this time, so thumbs up CGIers. The vampires appear less green but also slightly too bronzed. I convinced my movie-buddy that they have been spray-tanning for the wedding, ya know, to look normal for the cameras, but who knows, maybe they blew the budget on talking wolves so there wasn't enough white makeup to go around. I was not involved in the financial decisions for the film, so really, I cannot make any assumptions.


Oh, by the way, I loved it. I know, it doesn't sound like a good movie and it really wasn't great but I was not bored at all, I was enthralled. No one is going to call this movie a masterpiece, but I was not looking for a masterpiece. I came into this movie-going experience to see Taylor Lautner's abtabulous body, stare at R-Patz's perfect lips, hate Kristin Stewart for being so annoying and finally, to be entertained. Mission: Accomplished.

*bow-chica-wow-wow-headboardbreakingsound
**My reaction was hysterical laughter.
***The exception to this is Anna Kendrick. She was on the screen for less than 10 minutes and I loved every second of it. She is brilliant. 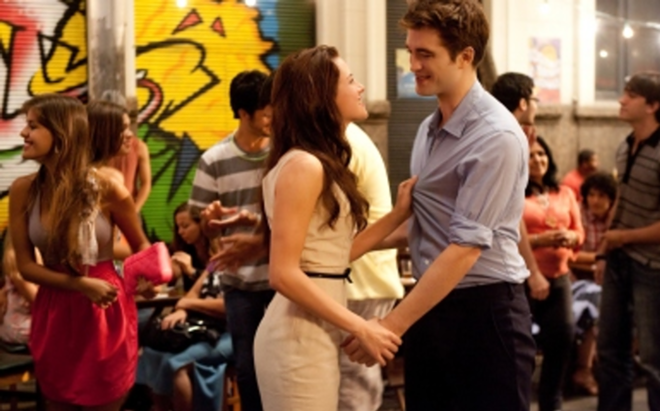 Breaking Dawn is the book that all Twilight Saga fans were dying to read, so The Twilight Saga: Breaking Dawn - Part 1 should be the crown jewel of the movie franchise. The perfect wedding followed by a tropical honeymoon and then a mutant baby, this is the stuff that little girls' dreams are made of, right?