Cockroach Bay off Tampa is an easy paddle loaded with mystery

Since the 16th century, this cluster of mangroves has lured Floridians. 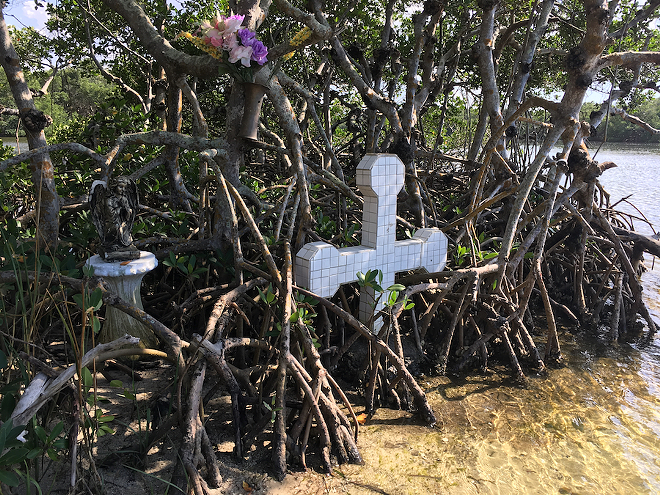 Cathy Salustri
Cockroach Bay's mystery goes back to the 16th century — did Panfilo de Narvaez ever visit this part of Tampa Bay? — but the cross probably hasn't been there *quite* that long.

First things first: We did not see a single cockroach when we paddled Cockroach Bay. We did, however, get a lot of strange looks from our land-lubbing friends, whose most common reaction to our kayak trip was a grimace, followed by the word “yuck!”

Which is too bad, because Cockroach Bay is an oasis along Tampa Bay, especially given the indignities done to the bay since Panfilo de Narvaez first reached the area in the early part of the 16th century. Narvaez and his crew were among the first Florida visitors to treat the locals — and the land — like it was worthless. Reports of the Spanish conquistadors burning crops and villages and exterminating local Apalachee Indians as they moved north from Tampa Bay to Florida’s Panhandle abound, so when Narvaez died by drowning, I can’t imagine those locals shed many tears. An appropriate end for the man who started Tampa Bay down a five-century journey of abuse.

Since the Spanish arrived, Europeans have treated the bay as a sort of aquatic Giving Tree, taking what we wanted and rarely giving much back. We fished and netted, yes, but we also dredged and filled. We made land for homes. We allowed power plants to set up along the shores. We hollowed out the bay bottom to allow for shipping and cruises. In many ways — not the least of which literal — we’ve used Tampa Bay as a toilet for the detritus of civilization. In recent memory, upper Tampa Bay has had alarming levels of cadmium, and a closed fertilizer plant makes cleaning the water runoff tough. The bay grasses — and the bay life —withered until, like the stump of the tree in the Shel Silverstein book, the once-bountiful bay had almost nothing left to give.

While we’re still learning from our mistakes, efforts to repair the bay — or, in some parts, simply minimize the damage — are underway. And if you seek proof that the waters of Tampa Bay can be beautiful, Cockroach Bay Preserve State Park and Cockroach Bay Aquatic Preserve offer it in shades of sapphire and emerald.

Granted, the name is less than auspicious, but, again, blame the Spanish. When explorers first saw Tampa Bay, the waters were rife with horseshoe crabs. According to legend, the abundance of horseshoe crabs led the conquistadors to believe the crustaceans were related to cockroaches, hence the name. Whether this is true or not, of course, remains unknown. 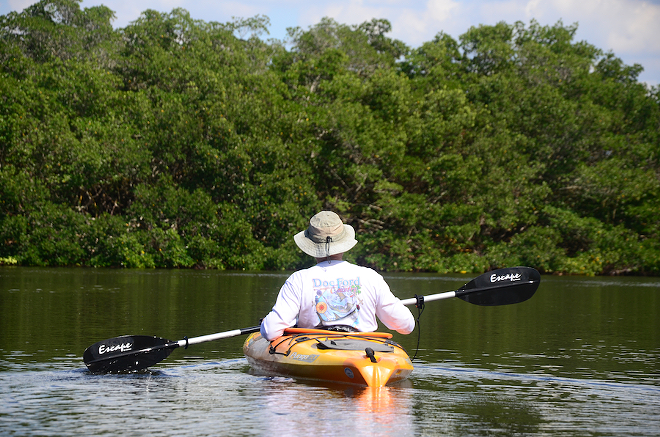 Cathy Salustri
Kayaking Cockroach Bay is a misnomer; this chain of mangrove-ringed islands is actually part of Tampa Bay.

In other ways, too, the name is inaccurate: the waterway isn’t a bay; rather, it weaves through a cluster of tiny, mangrove-wrapped islands. The water secrets life from one island to the next. Sometimes it flows in broad sheets; other times, it winds and twists through mangrove tunnels. Two paddlers could launch from the same boat ramp and have two wholly different experiences along the two paddling trails.  You can make a beeline for the open water of Tampa Bay, but why? The tunnels await, and even the broader water offers plenty to see.

What you might not see, oddly enough (we didn’t)? Horseshoe crabs (your best bet for seeing them is around the full moon, when they nest (three days before and after, at high tide). However, the launch has no shortage of tiny land crabs that race towards their holes as we approach. On the water, we’re treated to a ballet of mullet leaping out of the air and falling back to earth with all the grace of a puppy.

Through the clear water we see more, swimming through the lagoons between the islands in the Preserve. Stingray, too, abound — a sign that the water’s warming and spring has, indeed, arrived. Through mangrove tunnels and open water, feathers and find abound.

As we haul our kayaks at the crowded ramp, the light reflects off something in the trees: A cross, covered in ceramic tiles, planted in a crop of oyster-crusted red mangroves. Next to it, almost unseen, a statue of an angel rests on a birdbath base. A bouquet of silk flowers nestled in a mangrove crook watches over the tableau. We ask, but no one knows why it’s there, or who maintains it.

We don’t know whether Narvaez ever found his way over to Cockroach Bay, or if perhaps a later explorer named the area. Likewise, we don’t know if those mullet jump to escape predators, get oxygen or slap themselves free of parasites. A mysterious cross at the entrance to a mangrove swamp seems somehow appropriate.

And, just as not knowing about Narvaez or the mullet, the mystery makes the paddle all the more sublime.