Papillon: a prison-escape remake even muddier and bloodier than the original, and just as beautiful

Not just a remake, but rather an independent adaptation that transcends the genre. I’ll confess that I have a knife fetish. Or rather a knife phobia. In real life and in movies. It’s a sickening fear of sharp objects sliding across skin, a cold metal blade slicing into warm flesh, peeling back layers of epidermis deeper and deeper, with an immediate crimson ribbon that becomes a welling-up, then ooze and gush of blood. Blood itself doesn’t bother me; it’s the sharp edges that do me in. I flinch in a movie when a scene shows someone getting a paper cut. I grimace if someone slices his hand on the jagged edge of a tin can. I gasp when the surgeon asks for a scalpel as one gloved hand reaches toward another. I groan in any barber shop scene when the straight razor comes out, then drop to my knees as the strop-sharpened blade comes closer to a man’s taut neck stretched to receive the shaving steel. I yelp out loud when soldiers fight and someone grabs the wrong end of a sword or bayonet. I whimper when the blade finds its mark and the ripe flesh is silently sliced apart with a red gash, like a fleshy tomato yielding its tissue and juice to the slicing, raggedly serrated edge.

Thus this remake of Papillon kept me in a whimpering mess — cowed in my seat, eyes averted, breathless on my knees — for much of the film’s two-hour running time. Blades and blood dominate the prison cruelty, including self-inflicted wounds in order to escape the work crew, bowel evisceration to recover swallowed contraband, and the ever-present guillotine that decapitates saint and sinner alike.

If you've ever been in jail, the initial sounds — the grating slide of opening doors against concrete floors, the thunderclap crash of heavy metal bars slamming shut, the echoing reverberations of steel against steel — never leave you, even long after you are gone. The first sounds of the film, while the frame is still black, are that metallic clanking, jangling, rattling, slamming, followed by the the din of voices in pandemonium. The film never lets up with the aural onslaught; even in silent isolation, the prisoner's mind swirls with noise.

It's both a Dantean and Kafkaesque world here in the penal colony, with increasing levels of Hell in a harrowingly oppressive system where the warden orients the prisoners to their new home by announcing that "keeping you is no benefit, destroying you is no loss."

That said, this is a stunningly beautiful, sharply realized film. If there were ever a cinematic testament to a man’s persistence in the face of overwhelming odds, his ability to survive barbarism, his capacity to endure injustice, his resilience in the face of utter inhumanity, then the true story of Henri "Papillon" Charriere (Charlie Hunnam) and his prison buddy Louis Dega (Rami Malek) reveals all that and more in its muddy, bloody, knife-bladed glory.

To call it a remake or not is immaterial.

To dismiss the latter, as some critics have, for the former is to cheat yourself of one of the most gripping films of the season.

But so too is this 2018 production with its Michael Noer direction, Aaron Guzikowski screenplay that incorporates the Trumbo script, Charlie Hunnam and Rami Malek performances, David Buckley music, Hagen Bogdanski cinematography, and Tom Meyer production design.

In my opinion, this film is equally stellar — neither more, neither less, just equally first-rate — an independent adaptation that really does go well beyond the prison-breakout genre. Harsh, gritty and graphic, it’s based on the international best-sellers Papillon and Banco, both unflinching looks at the horrors of prison and the desperate, ongoing efforts to escape over a 14-year period between 1931 and 1945. Papillon, the safecracker from the Parisian underworld, is framed for murder and condemned to life imprisonment in French Guiana, South America. He forms an unlikely alliance with Louis Dega, a convicted counterfeiter, who in exchange for protection, agrees to finance Papillon’s escape. His efforts to escape send him to the even harsher Devil’s Island. Their struggle to survive incorporates the nightmarish conditions, including tropical diseases, savage beatings, forced labor, solitary confinement, isolation and silence, public beheadings, betrayal, police corruption, Catholic collusion, rape, murder and more.

This new film by Danish director Michael Noer, shot in Malta, Montenegro and Serbia, is about half an hour shorter than the original, thus perhaps less ponderous, less grave, less allegorical. Gone are the crocodiles and the lepers and maybe there’s less here of the mental torture of isolation. What had been a sweeping epic about the indomitability of the human spirit is still that, and also a rollicking yarn — albeit based on true story and incorporating much of the previous Trumbo screenplay — about a penal colony and those who try to escape from it. 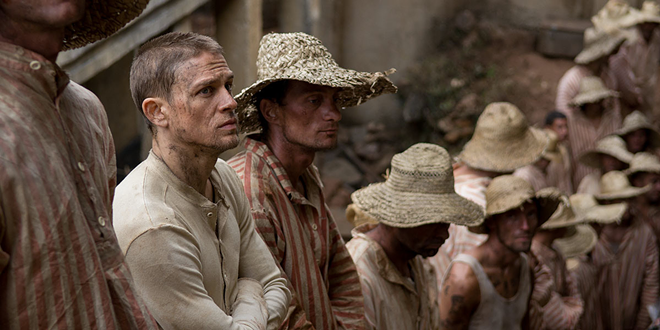 One of the huge differences between the iconic film from 45 years ago and this new production is our contemporary awareness of worldwide incarceration under horrific conditions with the use of government-sponsored isolation and torture. Today we are more cognizant than ever of the prison life and the navigation necessary for inmates to stay alive, both physically and emotionally. Prison privatization without oversight makes us realize that though the storyline might not have changed much from the 1973 version to the 2018 version, the world sure as hell has.

You may question my earlier use of rollicking to characterize something so unrelentingly grim. But the ferocious alpha male of Papillon, as conveyed exquisitely by Hunnam, and the vulnerability and spirit conveyed by Malek in the role of Louis Degas — and the male bonding that exists between them — is one of the most profound examples of humanity in an environment where none else exists. That Papillon has to endure this, even as we know he is innocent, makes it all the more cruel. This will to survive in the face of odds that say survival is impossible makes this film transcend the typical tropes of prisoners yearning to breathe free. The men may be trying to escape Devil’s Island, but they’re really trying to escape themselves.

There is a genuine love that evolves between these two men — though it’s a macho camaraderie at a distance — and it’s that awareness that allows them to better understand themselves. Watching them evolve and age over the time of their imprisonment is one of the great pleasures, of many, of this movie.

It's a test of endurance — for Papillon, for Louis, for those of us wincing and whimpering in the theater seats. Sharp edges notwithstanding, this emotional and existential self-discovery more than justifies all the visceral mud and blood and blades that they, and the audience too, have witnessed.