He started writing an article about hacks. You'll never believe what happened next...

He started writing an article about stupid "hacks." You'll never believe what happened next...

flickr/wwhyte
Seriously. On what lawyer-free planet does this contraption exist? Not to mention you've got a baby in front of the movie screen. Screw it, just let the kid fly the plane.
Hacking. It’s everywhere! It’s the choice of a new generation. It’s not just for teenagers anymore. Wikileaks is hacking. The Chinese are hacking. The Russians are hacking. Hell, if my Facebook feed is any indication, everyone is hacking.

Hack Your Latin? (I have Latin to hack?)

Stop it, people. You must stop it, because I’m a sucker for “hack” click-bait. I can’t resist it. It’s either going to be incredibly helpful (yay!) or really stupid (yippee!). When I began writing this post, it was in order to expose the fraud of “hacks.” I searched through my news feed for pieces that had actually been shared by my friends, or suggested by the algorithm that determines every facet of my life. Here are a few gems:

I expected something useful when flight attendants revealed their favorite travel hacks. The headline should have been, “Flight attendants refuse to reveal helpful travel tips.” For instance, they say to sit near the back if you intend to hit your call button and ask for something, because they don’t want everyone in the plane to SEE you receive said item and have everyone start asking for it. (I want a blanket too!) But please, everyone knows the call button does only one thing: It tells them who the most irritating person on their flight will be. (My elbows like bumping it accidentally.) Or, how about, “Stay at a hotel with free breakfast.” Um… how about telling me how to get free room service. That would be a hack. Or, “Fly first class if you qualify for an upgrade.” Yeah. Or, buy a private jet if you can afford it. Good advice. But my most favorite was “Avoid flying near babies.” Now, this would be awesome advice. I have two kids, so this should teach you how to avoid sitting near me. Their advice… and I’m not making this up… is to avoid the bulk-heads between sections because this is the only place to secure a baby bassinet. Okay, I’m not in the Million Mile Club, but I’ve flown my fair share and crossed the sea a few times, and I have never seen one of these things. And having flown with babies, I can assure you, my wife would know about this… and my kids would have never tolerated being strapped in like they are on a seven-year mission to Mars. Thanks, flight attendants. Your true travel secrets are safe.

flickr/wwhyte
Seriously. On what lawyer-free planet does this contraption exist? Not to mention you've got a baby in front of the movie screen. Screw it, just let the kid fly the plane.

Not once, but twice I’ve run across different ways of folding women’s panties. (OK algorithm, you got me. Honestly. I do the laundry.) One method has us folding them in an interlocking manner so that they can be accessed from a used tissue box. Ladies, was this a problem for you? The other showed how to fold one into the size of a pen — in a mere 30 seconds. Look, I’m a Neanderthal. But I’m also a stay at home dad/writer. There are things that don’t fold: panties, fitted sheets (shut up, YouTube), and sports bras. And if something takes 30 seconds to fold, it’s not meant to fold. We have novels to write.

Another favorite popped up in my feed, courtesy of our good Creative Loafing friends. “You're doing it wrong: 5 Portillo's hacks you never knew existed.” I never even knew Portillo’s existed — and I’ve spent a decent amount of time in the Windy City and no one ever mentioned it. I’ll admit I was intrigued by turning your chocolate cake into a milkshake. I’m not driving to Brandon for it (or anything else for that matter), but cool. But the best was, “Get Chili.” Um… how is this a hack? If you want chili… order it? Isn’t that how restaurants work?

Before I come off as too cranky… I was humbled in my quest for hacks to snark at. In my quest to prove that you cannot “hack” a package of cheese, I discovered it to be a brilliant way to keep cheese fresh without grabbing another plastic bag. A win for me, cheese... and the planet.

Jonathan Kile
Cut through the entire package about an inch and a half from the end. Eat that cheese. Slip the end of the package over the remaining portion. Brilliant!

But the real hack that brought me to my knees involved the simple taco. See, I grew up in Southern California in a town that was 78% Hispanic, 10% Asian and 9% white. The tacos in my middle school cafeteria could sell for $9 a piece in Seminole Heights. These lunch ladies deserved a Michelin Star. I know tacos, and there isn’t a decent one east of the Mississippi (except for New York City and my kitchen). So when it was suggested that you heat your tortillas in a slotted toaster, I scoffed. But I had to try it. Now, no “hack” is going to give you a truly proper taco shell, but I want to eat tacos more often then I want to fry shell shells in hot oil on my stovetop. I prefer the corn tortilla, because flour tortillas are like putting a delicious Portillo’s Italian Beef sandwich on Wonder Bread. But, I put that flour tortilla in the toaster and it came out gently folded with just the right combination of chewy crispiness. Well played.

This is just the tip of the hacking iceberg. (In fact, I think this should be a series.) There were hacks tell us to start a charcoal grill by lighting corn chips on fire. I suppose this is useful, should you find yourself forced to cook in an empty room with only a grill, a lighter and a bag of corn chips. The same intrepid griller showed how to use tin snips to turn a can of beans into a grill (topping it off with a grill grate). It looked like the first part of a Darwin Awards story. My friend, if you have the grate, but no grill, just don’t grill that day.

There was the handy hack of how to avoid all the nasty chemicals in sunscreen by making your own sunscreen at home. This involved coconut oil, essential oils (because, you know, they’re essential), beeswax granules, red raspberry seed oil… you know, stuff you already have sitting around the house. Mix them all together, simmer until the sun goes down, and voila! It’s dark out! No sunburn today! But seriously, I’m not a fan of sunscreen and I used to live in Gulfport where people have come to blows over sunscreen recipes. But I’m reminded of my holistically-minded friends who offered my wife and I their “organic” sunscreen, before spending a day drinking tequila in the Bahamas (that was a humble brag). We declined, slathering ourselves in seven chemicals banned by the EU while they applied a natural human marinade that washed off before their first margarita was gone. The only thing worse than not wearing sunscreen is thinking you have sunscreen on. Here’s a great sunscreen hack: an umbrella!

We all know that's why you read this. 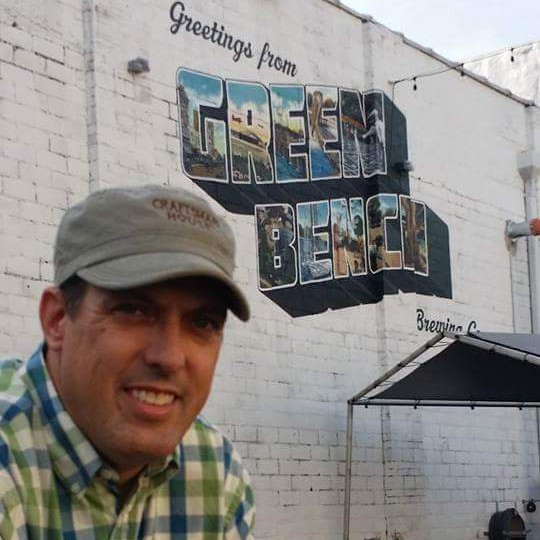 When Jonathan Kile isn't using Oxford Commas and drinking chai tea, he encourages you to check out his adventure thriller, The Grandfather Clock, which is currently the #1 Free Adventure/Suspense eBook for Amazon Kindle. The sequel, The Napoleon Bloom, will be out in 2016 2017. He promises. Jonathan gets his email at [email protected].
Scroll to read more Local Arts articles