Peter Pan: The reason to grow up

A beautiful production that also addresses the unconscious. If psychologist Bruno Bettelheim is right, and fairy tales can help children cope with difficult existential problems, then Peter Pan surely exists to provide aid to those kids afraid of growing up. After all, what Peter offers Wendy, John, and Michael Darling is an escape from aging, even if it’s in a Neverland threatened by Captain Hook and his evil crew. The stay in Neverland is so much fun, in fact, it seems the Darlings will never leave. But then there’s a break: Wendy realizes that Peter can’t become more than a playmate, that a romantic life partner is what maturity alone can provide. Watch J. M. Barrie’s play carefully at freeFall Theatre one of these weekends, and you’ll see Wendy, with quiet urgency, ask Peter if she can ever be something special to him — and he replies, yes, you can be my mother. Even for a young girl used to playing with dolls, this response is unacceptable, and Wendy books it back to Bloomsbury, with John and Michael flying beside her. As Bettelheim says, “If one has found true adult love, the fairy story...tells, one doesn’t need to wish for eternal life.” So the children opt for England, their grateful parents, and growing old. But Wendy, at least, knows something new this time. She knows why to stay.

Can a play first produced in 1904 and most familiar as a Disney cartoon support such a psychological reading? When it’s given a production as superb as the one at freeFall, it definitely can — and probably others as well. The freeFall Peter Pan is beautiful to see, splendidly acted, funny and vibrant. The delightful Chris Crawford dominates the show as a blustery, swaggering Hook, but all the actors are first-rate, and there’s even some fine singing and a little worrisomely convincing swordplay. Michael Raabe’s musical direction is impeccably effective, and Eric Davis’s costumes are a colorful mix of period aptness and timeless whimsy. I have to warn that the play is more fit for children than for adults — for the latter, the hijinks in Neverland can eventually become tiresome — but if you know any ankle-biters, consider it a holiday obligation to expose them to this wonderful theatrical gift. FreeFall’s Peter Pan is performed so vividly, it should win any child’s heart. And it might also help the little ones address that simmering question, do I want really want to grow up? 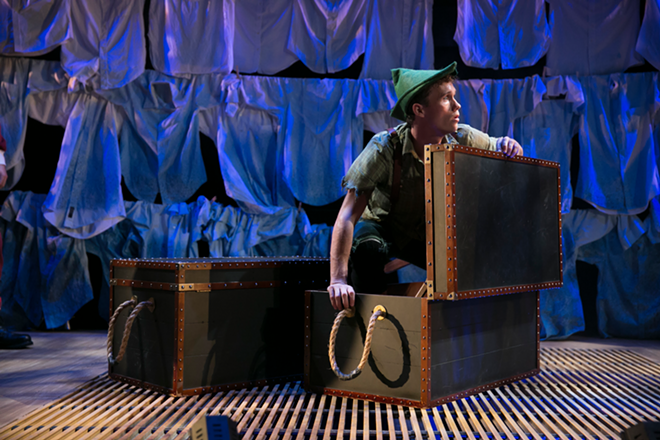 But let’s talk about performances. As I said, Crawford is phenomenal. I’ve seen this fine actor in several other productions, but in none of them has he dominated the stage as he does in Peter Pan. Crawford’s Captain Hook is hilarious, an icon of self-love and blowhard bravado, not entirely unrelated to Shakespeare’s narcissistic Falstaff. As his nemesis Peter Pan, Taylor Simmons is near-perfect. This is a boy who only wants boyish things: to fight, to lead other kids, to hear stories, to ignore responsibilities. He’s an expert swordsman and a talented mimic, who can even make himself sound like the famous crocodile shadowing Hook. As Peter’s new friend Wendy, Gabriella Guinta is just right: childish enough to want to avoid family obligations, near enough to maturity to sense the hole in the heart of Neverland.

And then there’s Marissa Toogood as Wendy’s mother, Mrs. Darling. Although the part is relatively minor, Toogood fills it with so much warmth and color and love, you want to elect her as Model Parent — and it doesn’t hurt one bit that she also has a beautiful singing voice. Crawford doubles as her husband capably, displaying an impatience and querulousness that’s just a thin covering over an immensely generous heart. And speaking of hearts, Susan Haldeman operates and speaks for Nana the Dog, a life-sized puppet so furry and good-natured, you’ll want to feed it puppet biscuits. There are half a dozen other actors, all of them topnotch, all making use of Charles Murdock Lucas’s set, featuring a couple of steamer trunks and a model of the Darling house backed by a wall of what look like shirts. The three-piece band, led by Raabe, includes Daniel Schwab’s poignant violin and Bert Rushing’s expressive drums. As always, Eric Davis directs with an artist’s perfectionism and a showman’s love of spectacle. If Bruno Bettelheim is right, there’s a reason why some children’s stories — Little Red Riding Hood, Cinderella, Hansel and Gretel – show lasting power: they speak to deep currents in the psyches of most children. The superb freeFall production proves that Peter Pan, a late addition, also belongs in this category. Do your kids a favor and bring them. On the conscious level, they’ll have a rollicking good time. On the unconscious, they just may find the answer to a question they didn’t know they were asking.