Learning about bees and wasps, in ways both easy and hard. 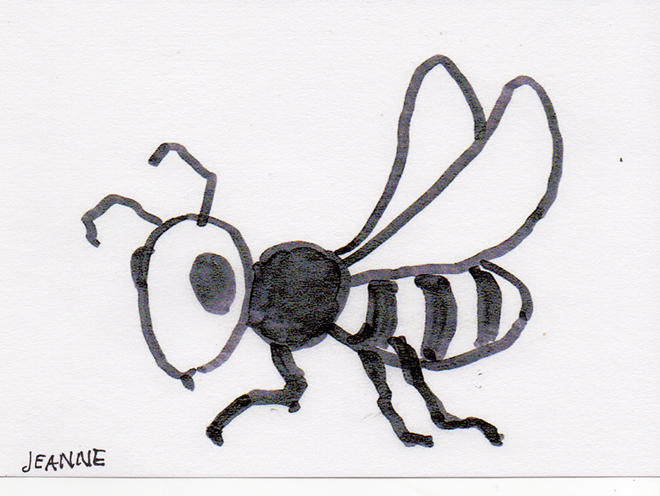 The bees have found him out,

One morning during our recent dry spell, I was in our front yard watering the new azaleas. We bought five new azalea plants because some old ones died. Azaleas aren’t immortal, and our oldest, between 35 and 50 years old, have started drooping and dropping by the wayside, along with some of our friends, whom we can’t replace. While thinking these melancholy thoughts I was interrupted by a light buzzing of a few bees on a nearby bush. My first reaction was, “Where have you been?”

Twenty years ago, when our azaleas were at their fullest, we’d step out on our brick pathway into a full-throated buzzing, like the distant hum of the Grand Prix races downtown. Bees were all over the garden, bossily bumping each other off individual blossoms, collecting pollen for their azalea-scented honey. There were wasps around too, though fewer, and I stayed away from them. I’ve had memorable run-ins with both. When I was growing up in Flatbush, where few bushes were to be seen, flat or not, our parents would take us out during summer vacation for a week on Lake George, NY, so we could make acquaintance with horses, cows, frogs, streams and meadows. Early on during our first stay, walking among wildflowers near the hotel, I saw a fat and furry insect buzzing around a large black-eyed Susan; after watching a while (it seemed to ignore me) I reached out, grabbed it, and began to run to show my mother, who was outside with us. Of course, after two steps I thought I’d been shot. My mother pried my hand open and the dead (I suppose) bee rolled off; she wiped away my tears, pulled out the stinger and poured some cold tea — or maybe it was a gin & tonic — on the swollen spot. She was very calm about it. That was my bee lesson. My wasp lesson was harder.

Decades later, I was kneeling among our azaleas, pulling out weeds. I yanked out a large vine-like plant and immediately thought someone had tossed a shovelful of dirt on my face. But it wasn’t dirt: nesting there was a swarm of yellowjackets, a nasty kind of wasp which, unlike the unlucky honeybee, can sting more than once and seems to enjoy doing it. By now I was a grown man, so I didn’t cry, but leaped up and began running around the park in front of our house, slapping what seemed like hundreds of the yellow-striped creatures off my face and neck. Staggering back into the house, my face swollen from lips to eyelids, I frightened Jeanne, the children and, for about a week, anyone I met. However, I did learn, the hard way, that I’m not allergic to bee or wasp stings.

Unlike Sylvia Plath, who thought a hive looked like “a coffin for midgets,” I’ve made my peace with bees, and even wasps. Our daughter Gretchen has two hives, and this past Christmas we received her own honey. Bees, she told us, almost disappeared for a few years, diminished by pesticides and dwindling meadows, but they’re making a small comeback lately, as Americans learn how valuable they are to our crops and economy. Gretchen’s taught us much, including that the bees who collect the pollen are all female workers and the only ones who can sting (besides the mostly immobile queen). Hmm-mm. The males are drones. I used to identify with the worker bees who seemed like poets as they buzzed about gathering pollen to make honey, but now...

Still, you can spot our old Honda CRV by the black-and-yellow sticker on its back window: “BEEP for BEES.” As a voice out of the past liked to say, “How sweet it is!”

They thought death was worth it, but I

Have a self to recover, a queen.

Is she dead, is she sleeping?