Politics aren't funny, but a good president should have a sense of humor. 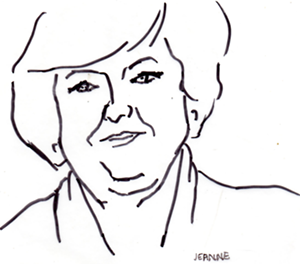 doled by the greathearted to the grateful many

One day we were sightseeing in Cornwall, and at noon Harry, our Cornish driver, stopped at a charming pub. As we entered, everyone welcomed him, from the owners to the diners to the men at the bar. When we remarked on this, he said, holding his arms out wide, “That’s me. I’m a legend in me own lunchtime!”

Donald J. Trump is now our president, and clearly sees himself as legendary, saying in infinite variations, Hail to me, the biggest Chief ever! If only, like Harry, he had a sense of humor. President Obama’s wit was priceless, and even President “Dubya” Bush could be funny (his sense of humor was “misunderestimated”). Trump shows zero acquaintance with that humanizing attribute. Several people thought he often was being sarcastic, which is a type of humor, but then they realized he was serious (“All the women on The Apprentice flirted with me — that’s to be expected.”)

A sense of humor can’t be developed overnight. On the other hand, a different habitual presidential tendency needs to be stopped cold: People thought this one might have been just a campaign tactic, but President Trump seems to be a congenital liar.

Now, Chief, stop lying! It’s not necessary anymore; you the Boss. This pattern of “unnecessary” lying is built into Trump’s psyche, and he hit the restart button as soon as he took the oath.

I don’t mean lying about policies. All politicians exaggerate the virtues of this program or the faults of the opponent’s ideas. Obama promised he would empty Guantanamo, end our overseas wars, and get some cooperation from the Republicans. President Bush really seemed to believe weapons of mass destruction lay buried in Saddam Hussein’s back yard. But they didn’t lie about checkable facts like the size of crowds (or whatever). Trump has brought new phrases into our dictionaries, like “post-truth” and “alternate facts.” (Well, not entirely new:  See 1984 by George Orwell, complete with a “post-truth” dictionary of its own — e.g., “Goodthink,” meaning “any idea approved by the Party.”)

Trump should have a natural ally in Great Britain’s Prime Minister Theresa May, who accidentally became the first leader of State he met with; and I was hoping that she’d be a good influence on him. Because her support group — the anti-immigrant conservative countryside outside London — is the same as Trump’s, I thought he might pick up some good sense from her; but she seems to be talking more like him instead, claiming that by leading Britain out of the European Union, she’s creating a new “Global Britain.” Huh? I don’t know if May has a sense of humor, though she has worn leopard-print kitty heels while giving a fiery speech to Parliament.

Another potential ally for Trump is Beata Szydło (pronounced “SHEEDwo”), prime minister of Poland and leader of the right-wing Law and Justice party, riding the same tide as May and Trump.  She’s basically an unsmiling person, but seems to have some self-awareness, so she’s taken to introducing herself with a James Bondian straight face, looking up (usually) and pronouncing, “The name is Szydło. Beata Szydło.” Friends tell me that her policies are deadly, but that’s pretty funny. Some hope there.

Still, Trump’s meeting with May went pretty well. They had to get along, and they seemed to do it. She clearly was the better negotiator, looking him in the eye (in front of the press) and saying, “We agree to support NATO 100%, right?” And Trump replied, quietly but clearly, “Yes.”  This, after insulting NATO almost daily for the past six months. Encouragingly, when an English reporter asked Trump a tough question about Russia (which he ducked), Trump looked over at May and said, “Did you get him to ask this question?”

It’s a bit ambiguous, but let’s give Trump credit for his first intentional joke.

He tried to live by his minimum

—both quotes from “Five Landays with a Latin Phrase” by Peter Meinke (in Lucky Bones, U. of Pittsburgh Press, 2014)