Poet's Notebook: Over the world's weight 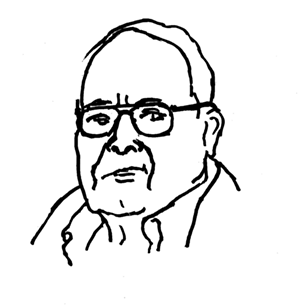 Not that the graves of our dead are quiet

Nor justice done, nor our journey over.

We are immigrants still, who travel in time,

Bound where the thought of America beckons;

But we hold course, and the wind is with us.

—from “On Freedom’s Ground” by  Richard Wilbur

Re-reading the above words made me feel an extra wrench of regret when I heard that Richard Wilbur had died on October 14th. One of our great American poets, he was 96 years old and, apparently, despite having fought in World War II, lived pretty close to an ideal life. And yet, because he was a deeply patriotic man and a lifelong liberal, he must have felt despondent at the end of his life: with Donald Trump as president, the wind is no longer with us.

I met him once, in 1982, when Jeanne and I were living in D.C. We talked briefly, but pleasantly — he was interested in my appointment at George Washington University — because it was his nature to be civil and generous, not in any dopey weak-kneed way, but hopeful about us all despite our weaknesses and failures. “Love Calls Us to the Things of This World,” he wrote, while looking at laundry hanging out to dry; “Let there be clean linen for the backs of thieves, / Let lovers go fresh and sweet to be undone.” Richard Wilbur never would have wagged his finger and chanted “We’re #1!”

This modest optimism cost him in the eyes of the public, and many critics, who prefer their poets to be lonely, addicted, and mentally tortured. (Now we like our presidents mentally tortured as well; what’s going on here?) Sylvia Plath burst on the national imagination when she committed suicide in 1963, as did John Berryman when he jumped off the Washington Avenue Bridge in St. Paul in 1972. Robert Lowell’s breakdowns and break-ups were legendary, as were James Dickey’s alcoholic antics, and the sad early deaths of Anne Sexton, Delmore Schwartz, and Randall Jarrell. They were wonderful poets, but their troubled lives and difficult deaths brought them more attention than Richard Wilbur’s long and sober life ever attracted.

He recognized and accepted this situation, saying in an interview that he saw poetry as his therapy, in order to handle through “the sanity of art” his war experiences, in which he saw action in Italy, France and Germany (at first a cryptographer, his leftist sympathies got him transferred to the frontlines). Like Robert Graves in World War I, he mostly stayed away from direct war poetry, folding it into his inner landscape (“Danger is sunk in the pastures, the woods are sly... ”).

Unlike the above poets, he became a settled teacher/poet/husband/father, with 20 years at Wesleyan University and 10 at Smith College. Wilbur’s poem, “Cottage Street, 1953,” written after he met Sylvia Plath, is a heartbreaking snapshot of two poets at the opposite ends of the poetic experience — Plath as the “poète maudit,” the “doomed” poet of extremes, like Rimbaud, Poe, Hart Crane, etc., and the less familiar “poète bénit” — the “blessed” poet of moderation, like Wordsworth or Frost (Frost and Wilbur were close friends).

If the juggler is tired now, if the broom stands

In the dust again, if the table starts to drop

Through the daily dark again, and though the plate

Lies flat on the table top,

For him we batter our hands

Who has won for once over the world’s weight