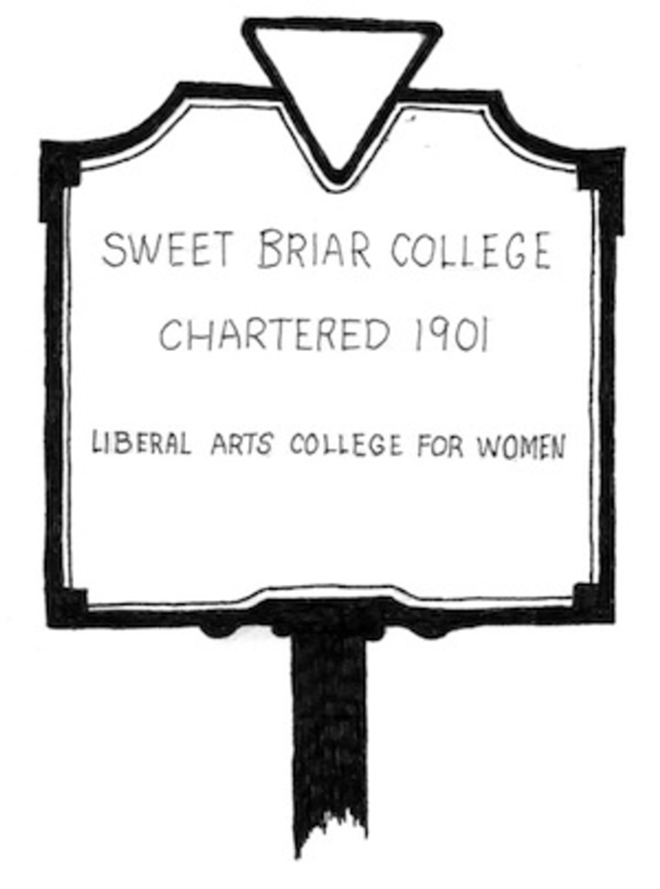 Jeanne Meinke
Poet's Notebook: Sweet briar
Bones in an African cave
gave the show away
they went violent to their grave
like us today


Our familiarity with Sweet Briar College came from three summers working at the Virginia Center for the Creative Arts, affiliated with the college and nestled nearby in bucolic Mount San Angelo. Novelist Sterling Watson and I used to enjoy a late afternoon run down the hill from VCCA, across Route 29, around the historic buildings and tree-filled campus, past a groundhog who always popped out to greet us, and then back to our Center and its swimming pool: about a 7-mile round-trip.

One summer Jeanne came, too, with her own artist’s studio where she pinned her lovely mini-drawings on the walls. That was the hot summer when the VCCA’s water system broke down and we spent several waterless days in what was usually a pampered environment (watch out, California!). In the midst of this time, we received an invitation to an afternoon party from the president of Sweet Briar, Nenah Frey. The 20 male and female artists and writers formed, we imagined, the most ragged, sweaty, unshaved, odorous, hair-bedraggled group who ever marched across the immaculate Sweet Briar campus. As we crowded into the president’s elegant living room, she received each one of us without blinking an eye. We sat around sipping sherry, while every ten minutes one of us would peel off and go to the bathroom, where we washed, shaved, combed our hair, and came back smelling a lot better. When we were all moderately presentable, we got up, thanked President Frey, hiked back up the hill, and went to work with a fond memory of Sweet Briar’s immaculate savoir faire.

Now Sweet Briar, one of a dwindling group of all-girl colleges in the country, is closing its doors. It seems, despite its high quality, there’s not enough interest in a rural school for girls. But all-girl colleges can offer a special education to their students in a free and safe environment: I’ve twice been writer-in-residence at Converse College in Spartanburg, SC, and Jeanne and I admired its bright students, imaginative liberal arts program, and campus that features statues of poet Emily Dickinson, artist Mary Cassatt, and singer Marian Anderson.

I attended all-boys Hamilton College in the 1950s, and it’s clear that, after going co-ed in 1978, Hamilton’s a more civilized institution today. But while co-ed undergraduate institutions are almost always better for boys, they’re not always better for girls. When girls visited our campus in the old days, there were strict rules about where they could stay (which of course we constantly tried to subvert). The girls, however, were forewarned, or knew instinctively, that these were feral boys, and handled us easily while enjoying the adventure.

Today, with boys always around them — and a contemporary attitude toward sexuality — we have some alarming statistics (from the National Institute of Justice, U.S. Dep’t of Justice, Campus Safety Magazine, and others): 20-25% of college women will be victims of attempted or actual rape. These statistics have been questioned (by Fox News and others), but one statistic remains unarguable: rape, whether in colleges, the military, or prisons, is vastly under-reported. I’m all for coed colleges, but I hope some all-girl schools hang in there, so we can study the different results. (See The Hunting Ground, the new documentary about the FSU/Jameis Winston case.)

Our latest college scandal involves the Sigma Alpha Epsilon fraternity at the University of Oklahoma. The Greek motto of SAE, translated, means “Everlasting Bond of Brothers.” The Latin motto of Sweet Briar is Rosam quae meruit ferat, meaning “She who has earned the rose may wear it.” There’s a difference; I realize it’s possible, but it’s hard to imagine a group of sorority sisters drunkenly, joyfully, chanting racist songs.

All things repeat
after the floods and flames
new boys play in the streets
their ancient games
—Both quotes from “Bones in an African Cave” by Peter Meinke, from The Contracted World: New & More Selected Poems, U. of Pittsburgh Press, 2006.