Prepare to be gobsmacked by ‘The Batman,’ a bleak, brutal and possibly best-ever reimagining of the beloved hero

'In short, it’s the perfect allegory for these crazy fuck-all times we’re living.' 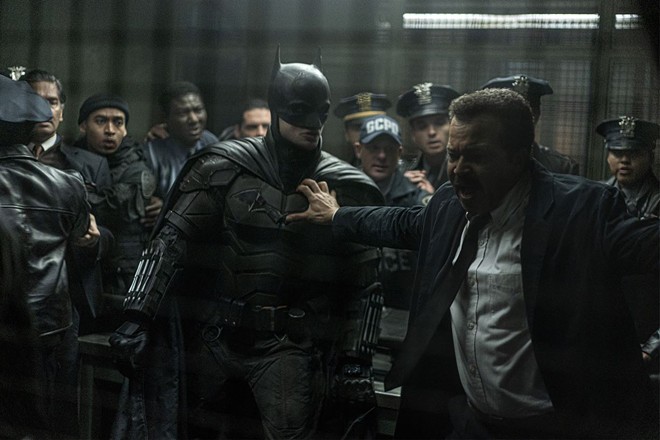 Photo via Jonathan Olley/DC Comics
More than any other film before it, 'The Batman' gives fans a blast of buddy-cop-chemistry between the world's greatest detective and Lt. James Gordon.
If you would have told me way back in 1989 that by the time I was in my early-50’s, there would be eight stand-alone films based on DC Comics’ "Batman," not to mention two ensemble movies (the abominable “Batman v Superman: Dawn of Justice” and even worse “Justice League”), I would have laughed in your face.

Now, if you would have told me that in 2022, one of the best movies ever made featuring Batman would arrive starring none other than sparkle-fanged Robert Pattinson as the caped crusader/Bruce Wayne, I might have swung on you, just because.

The Batman
4.5 out of 5 stars
Now Playing


Matt Reeves’ “The Batman” is hands-down one of the Top 3 best Batman movies ever made, standing shoulder to shoulder with Tim Burton’s “Batman Returns” and Christopher Nolan’s “The Dark Knight.”

No one is more shocked than me, and truth be told, this might just be my overall favorite in terms of pure storytelling. “The Batman” is like watching a classic issue of "Detective Comics "come to life.

The reality, though, is that “The Batman” is so much more than just a rain-soaked, atmospheric neo-noir.

For one, it’s the longest movie ever made starring Batman, clocking in at 175 minutes, or roughly three solid hours (and no, I’m not counting the bloated “Zack Snyder’s Justice League”).

For another, the cast is pitch-perfect across the board, from Jeffrey Wright’s James Gordon, who plays the perfect Murtaugh to Pattinson’s unhinged Riggs, to an unrecognizable Colin Farrell as Oswald Cobblepot and a chillingly good John Turturro as Carmine Falcone.

It’s true that Zoë Kravitz will never replace Michelle Pfeiffer, but her Selena Kyle is just as memorable, and her Catwoman is much more grounded.

But the two standouts here are Paul Dano, who succeeds in making The Riddler a truly menacing and diabolical villain, despite rarely showing his face until late in the third act, and Pattinson, who makes for the most relatable billionaire vigilante we’ve ever seen.

Seriously, and I say this as someone who didn’t care to consider Pattinson as an actual actor until 2019’s “The Lighthouse,” I can’t think of anyone who’s done a better job beneath the cowl (which is what matters because Bruce Wayne is an afterthought, at best, here). 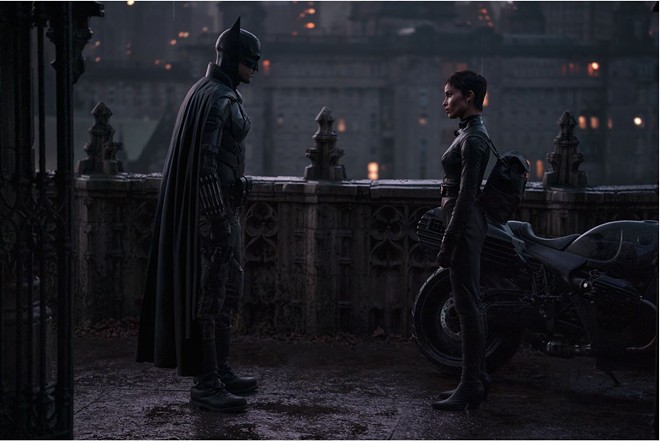 Photo via Jonathan Olley/DC Comics
(L-R) Robert Pattinson and Zoë Kravitz breathe new life into the decades-old love story of Batman and Catwoman, aka Selena Kyle.
As with any and every new comic book venture, the question becomes how you separate the new from what’s come before.

For me, “The Batman” succeeds because it has zero interest in being a comic book movie. This isn’t Val Kilmer with latex nipples or Arnold Schwarzenegger ad-libbing terrible puns. It’s not Christian Bale playing pompous and rich in public despite keeping an arsenal of fantastical toys in private.

“The Batman” is anger personified. It’s brutal vengeance with zero regard for personal well-being. It’s pain and torment and longing magnified and given voice through a Nirvana earworm that will rattle in your noggin for days.

In short, it’s the perfect allegory for these crazy fuck-all times we’re living.

In short, it’s the perfect allegory for these crazy fuck-all times we’re living.

As the conductor of Batman’s rage and Gotham City’s undoing, writer-director Reeves proves why he’s never to be underestimated. Much like he did with “Cloverfield” and “Let Me In,” he finds a way to showcase the humanity in awful circumstances and magnify the underlying horror of mundane moments.

Make no mistake, “The Batman” is more akin to a serial killer thriller than a candy-colored comics kaleidoscope.

Just to blow your mind a little, I will plant this seed: When you sit down in the theater this weekend, and the house lights dim, think of The Riddler as John Doe, Batman as Mills and Lt. Gordon as Somerset.

If you walk away without seeing the many, many parallels to “Se7en,” then maybe we shouldn’t be friends.