What really happens when the summer camps go home. Spoiler alert: They have lots of sex. 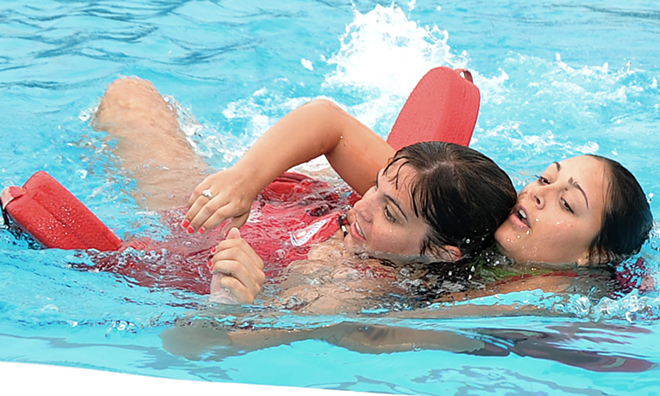 USAF
We did this.... sometimes after hours, without the suits.

I loved being a lifeguard.

Actually, by the time I gave it up, I was running satellite pools for summer camps. Which gave me a lot of power, a slightly higher hourly rate and keys to the pool.

Bad things about being a lifeguard: Sometimes kids shit in the pool and you have to close it, the pay sucks and when you have to save a kid, you're pumping adrenaline for at least four hours afterwards. Also, it changes how you look at pools and beaches forever. You see death in every possibility, and every public pool you visit has a lifeguard who — in your opinion — isn't doing their job the right way. At. All. Also, you never want to swim in a public pool again. Fun fact: At any given time, there's at least a paperclip-sized amount of fecal matter in that pool. (Ladies who have washed shit stains out of their beloved's underwear, that isn't hard to believe, is it?)

Good things about being a lifeguard: Sometimes kids shit in the pool and you get to close early and go home. Also, you get a great tan, end up in fantastic shape if you teach swimming (try treading water for 45 minutes a night while teaching the advanced classes)... and you can get some whenever you want some.

Maybe it's the Baywatch thing, or the dark tan and great muscles I developed while doing it, but it's the best I've ever felt and looked in my life. And that translated into a wonderful single life.

I loved acting like a kid while being able to do grownup things. Like, you know, sneaking back into the pool after dark with a date. Which I did — lots. Unbeknownst to me, my head guard was doing the same thing — apparently with most of the other staff (although not at the same time). Years later, we compared notes and realized that we'd both had so many interludes in the same guard shack, we were practically related. Or something. I'm pretty sure he still has keys. (Shout-out to Chip, and thanks for not getting any of the staff pregnant!)

USAF
In between all the sneaking back after dark, we did some serious work... fortunately, while we knew how to do this, we never had to.

And, despite all the sex-in-the-guard-shack and after-hours fun, we all took our jobs seriously. Under my watch, there were a few times when guards went in the water to make sure kids who were struggling didn't have more trouble. Only once did we have to call 911, and it was because a kid hit his head and started to bleed. And — not to push blame — I was on my lunch break when it happened. Still my responsibility, but not my fault. Point is, we took our jobs seriously.

I stopped running pools when my writing career started ramping up. These days, I teach my friends' kids to swim, for free. I don't want money; what I want is to see kids not drown. See, despite all the fun and the things I joke about with my friends, at the end of the day, it's a serious job — and it's one that never leaves you.

Even if they do change the locks on the guard shack.