The show about eternal love runs through Jan. 22. 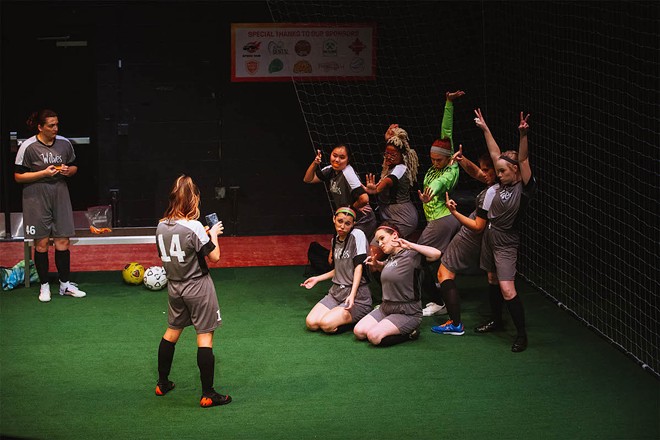 As I settle into my seat at Stageworks in Tampa's Channelside district, Miley Cyrus’ “Wrecking Ball” is continually pierced by the sounds of a soccer scrimmage punctuated by shrill referees’ whistles. It perfectly announces what’s to come.

Sarah DeLappe’s “The Wolves” follows a team over six weeks of its girls U-17 indoor soccer season. As the players warm up, we overhear the overlapping banter that juxtaposes the ethically complicated Khmer Rouge with pregnancy/abortion gossip—contrasting conversation that is profound and prosaic. The world’s sport has been siloed in a pressurized air dome in the suburbs. These American teenagers exist, quite literally, in an AstroTurf and netting bubble exquisitely imagined by Jo Averill-Snell and lit by Karla Hartley.
The team captain takes the girls through a series of stretches and “high knees-butt kicks” as we learn of skinny dipping, CT scans, self knowledge (what’s the big deal?), and experience verbal cruelty.

Georgia Mallory Guy’s fiercely intelligent and rigorous direction is also reflected in her sound design which connects the dots of action with driving force from “Victoria’s Secret” (Jax) to “Boss Bitch” (Doja Cat) to Tori Amos' cover of "Smells Like Teen Spirit.”

The unnamed characters are envisioned as “complicated, nuanced, very idiosyncratic people” but are only identified as jersey numbers in Sophia Pickford’s authentic costumes. The balanced ensemble is well-drilled and convincing.

Jessica Beltran (#14) is the insecure sidekick who tries to be as cool as her friend #7 but struggles with the pressure of sex and growing up before she is quite ready. The sarcastic striker Noa Friedman (#7) drops F-bombs and is too cool for school. Iman Bijou (#13) is a wacky presence who self-medicates. Captain Katie Huettel (#25) works to keep everyone in line, both physically and socially. Haley Janeda (#11) is a thoughtful budding elitist, while Layla Kuck (#8) plays dumber than she is so people will like her. Innocent and unlucky Sofia Pickford (#2) has a secret eating disorder. Perfectionist goalie Sydney Reddish’s (#00) performance anxiety manifests itself in pregame vomiting and awkward new girl Katie Terres (#46) just wants to fit in and be a worthy teammate.

When an unexpected plot twist brings a loss of innocence, Reddish has a powerful response and soccer Mom Jaimie Giangrande-Holcom caps the evening with simple restraint that only doubles the emotional impact. Ultimately, there is a particular kind of love that is forged between young women at an early moment in their lives that is eternal.