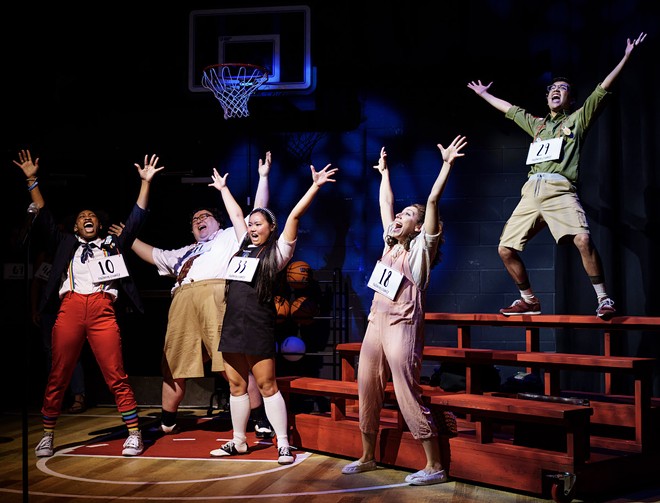 The late Stephen Sondheim, truly the Shakespeare of our time, was a champion of ambivalence and duality. Hence, he once quipped that he admired The Wiz for capturing joy—something he had no idea how to do despite his genius. Joy, it seems, is in short supply.

This week seemed like I was about to be swept away in a tsunami of despair. First, by the seeming failure to act in the face of unspeakable gun violence. And then by cognitive dissonance over worshiping assault rifles while SCOTUS threatens to deny women bodily autonomy.

But once I glimpsed designer Karla Hartley’s middle school gym set and heard that anthem of youth, the Beach Boys’ “Be True to Your School,” my troubles melted away. Not that the musical doesn’t challenge us. Thanks to themes of bullying, parental neglect, teen insecurity, helicopter parents, tiger moms, peanut allergies, and an entire song about unwanted and inconvenient erections, the production is practically a handbook for every known facet of teenage angst.

Everyone likes to win, but real life means we also sometimes lose. And, unfortunately, we’re so full of misinformation, that for the first time in our troubled history, a loser incited an insurrection in an attempt to overturn a fair election. Here, despite the competition, lessons are learned and kids emerge with a sense of well-being instead of failure.

Director Paul E. Finocchiaro (who also teams with Heather Krueger to create the splendid costumes) has a clear focus and has assembled a stellar cast of singing actors. Each performer embodies an egghead spelling trope which in the hands of William Finn (author of the Tony-winner, “Falsettos”) and his collaborator, Rachel Sheinkin, melts your heart. One surefire gimmick is recruiting four audience members to join the group of wordsmiths and integrating them with care and apt humor, inserting these good sports for maximum effect and allowing for nightly surprises. The two adults running the bee, Ms. Krueger (Rona Peretti) and Matthew McGee (Vice Principal Patch), are superb improv comedians who add hilarious commentary in the moment, particularly roasting the unsuspecting audience volunteers. The other adult in the room, Corey Kelly as Mitch lends a touch of subversive humor (and a dulcet baritone) as a tender ex-convict handing out juice boxes and escorting the tearful losers as part of his community service.

The cast of spellers is uniformly delightful; each making the most of their moment in the spotlight. They’re filled with the joy of competition, before they begin to resent each other. Making her professional debut, Jordan Lakins as the lisping Schwartzy is a dynamo who suffers through her two “win at any cost” overbearing (don’t say?) gay fathers. Dylan Glover (Chip) a Boy Scout returning to defend his title awkwardly finds puberty hitting at just the wrong time. Patrick C. Messmer (the A.D.D. Leaf) is a homeschooler overshadowed by his siblings hilariously attired in two many homemade superhero capes. Katie Huettel (Marcy) shines as the uber-overachiever who exudes energy and confidence as the girl who never loses, but finally learns a valuable lesson leading to a happy life.

The commanding Austin White (know-it-all Barfée—“accent aigu”) embodies the geek dressed in shorts and two-toned wingtips which he uses for his famous "Magic Foot" method of spelling glory, even though he only has one working nostril and a prickly personality.

Ultimately, though, Julia Rifino as Olive is the most fully dimensional character with a poignant back story of parental indifference. The hurt behind her eyes reaches to the back row. She has a winning smile, but she’s a loner; it seems that the words she learns from the dictionary "Are the friends that I'll have forever / More than the friends I have made in school."

Finn’s infectious score is well-served by Music Director Juan Rodriguez and his offstage band which provides enthusiastic accompaniment and Jo Averill-Snell (whose lighting seems to be everywhere in town) enhances each developing mood beautifully. It’s exactly what we all need in this moment.

Critic’s note: I wasn’t necessarily a speller, but as a critic, I love words. I hope you’ll do yourself a favor and spend a joyous couple of hours with these folks. But regardless, please take the time to “Google” Harini Logan, who won last week’s real national spelling bee in the first ever historic “spell-off” lightning round. The 14-year old from San Antonio spelled 21 words in a rapid fire 90 second burst. None of which I had ever even heard! And, while claiming to be a slow speller, she’s so quick you can barely follow. It’s absolutely amazing and joyous.