'Sunday in the Park with George' will be performed four times at Murray Theater. 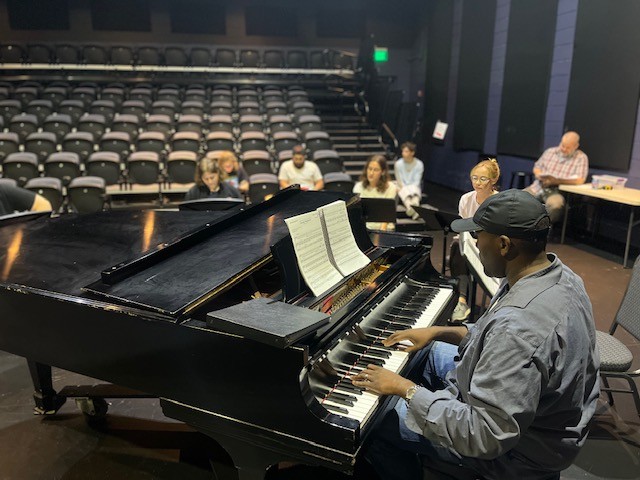 Musical director, Yohance Wicks, rehearsing with cast members for 'Sunday in the Park with George,' happening June 30-July 2, 2022 at Ruth Eckerd Hall in Clearwater, Florida.
Musical director, Yohance Wicks, practically vibrates with excitement as he discusses the late Stephen Sondheim’s music. Trained as a choral conductor more at home with the madrigals of Palestrina than the Broadway choruses of Richard Rodgers, he nonetheless glows:

“What Sondheim does so well is putting emotion into the music and having no back off on it. I hadn’t really gotten into the juice of what a musical could be until I encountered Sondheim. I never found another composer that doesn’t shy away from the human condition and human emotion.”

Wicks’ eyes sparkle as he describes how the “characters' individual motifs are embedded in the music when they are speaking. You don’t find that sort of musical intrigue in other composers that I’ve encountered. The intention behind his composition is immeasurable.”

This weekend for just four performances presents a rare opportunity to experience a seldom produced Pulitzer Prize-winning musical.
"'Sunday in the Park with George' is truly one of the most beautiful musicals ever created. It's about life, love, art...and how the world needs more of all three,” says REH’s Hoffman School of the Arts Drama Department Chair, Jack Holloway. “It's not an easy show to put on by any means . . . but this cast of talented young artists is more than ready to rise to that challenge and tell a story you will always remember.”

Acclaimed local set designer Scott Cooper, who just this past weekend helmed a thrilling production of the Sondheim masterpiece "Sweeney Todd" at SPC, has joined the Summer of Sondheim team. Cooper, who has contributed award-winning sets for professional theaters across Tampa Bay over the years, welcomes the challenge.

The impetus for the design is based on the simplicity of the opening lines. “White. A blank page or canvas,” and echoed at the end, “So many possibilities.” Cooper is effusive: “What we love about theater is that anything can happen, anything is possible. You get to create the world in your eyes“ Thanks to the advancement of modern stage technology, a blank frame is transformed by the magic of projections. “It’s about [George’s] imagination. A blank page is every artist’s dream and every artist’s nightmare.” But Sondheim inherently “understands how to get inside the characters; they’re so psychologically evolved.” Everything the actors need is in the score, “they just have to trust.”

Leading the cast as the obsessed 19th century painter George Seurat is Chris Cavazza, an alumnus who studied at the Hoffman School for the Arts since he was 14. This production is the second all alumni show, so Cavazza offers that “we walk in and know this is a professional setting.”

Wicks affirms the rigor of the programs. “The students work from the time they’re in elementary school . . . until now when we get them as alumni; they’re ready for the challenge to step into any role.”

REH VP and producer Sharon Reid-Kane offers that it’s about the experience for the alumni cast—the rehearsal time spent together that is life altering. But when they first all sang the Act 1 finale together, even the actors were surprised by how good it sounded. “We want to push the kids and we want them to grow.” Indeed, the choral anthem, "Sunday," which closes both acts, is one of the most beautiful and emotional songs ever written for the theater.

The characters of Seurat’s painting are brought together as George demands: “Order. Design. Tension. Balance.” And finally, “Harmony.” The music builds slowly as the painting’s subjects describe Seurat’s pointillist, impressionist dots of paint until the French horn trumpets and the hair rises on the back of your neck. It’s a triumphant, emotional moment. Director Holloway describes it as “a sunrise for the ears.”

Although it’s ahistorical, I have a vision of a few savvy teachers in 1616 trying to explain to the kids in London that they dragged to the Globe about how lucky they are to have lived in the time of Will Shakespeare. “You might not believe this, but people will still be doing these plays in 400 years.” Award-winning actor Mandy Patinkin (who originated the role of George on Broadway) often called Sondheim the Shakespeare of our time. Director Holloway heartily agrees: “He is Shakespearean. Just as Shakespeare will leave you hints. He’s leaving you breadcrumbs . . . [and] a map, but not forcing you down a path.” We all are just as lucky that we lived in the age of Sondheim.

Please do yourself a favor and bring your family and friends to this profound and entertaining musical. Sondheim always challenges audiences in the best way. As we’re reminded at the end of the soaring love duet in Act II (which always produces in me a Pavlovian response of tears):

Anything you do,
Let it come from you.
Then it will be new.

Give us more to see.

Which is exactly what the dedicated crew at Ruth Eckerd Hall will deliver during the Summer of Sondheim. "Sunday" will be followed by a full production of another TONY-winning Sondheim-Lapine classic, "Into the Woods." Don’t miss the chance to see genius at work, changing the lives of our youth, and lucky audiences in the process.