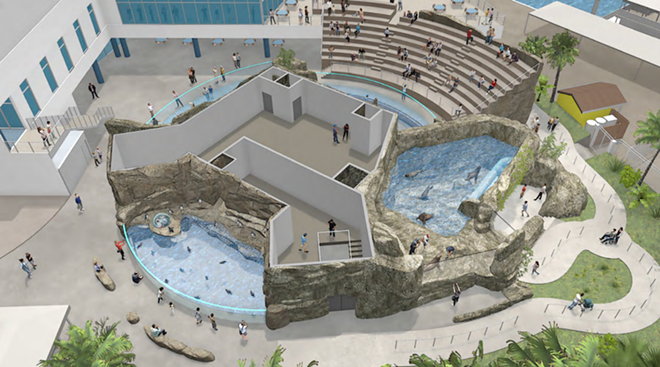 Space Haus
A 200,000-gallon, three-space interconnected habitat will be added to the outdoor plaza to house sea lions and feature underwater viewing and overlook seating
Tampa is about to get some new residents. Luckily, they already have their housing situation figured out.

The Florida Aquarium announced a $40-million-dollar expansion plan today that will bring several new exhibits to the aquatic center, including the west coast of Florida's first-ever Californian sea lions, African penguins and puffins.

The aquarium's first-ever expansion project will consist of three phases, beginning in January of 2023 and scheduled to finish in 2025.

Phase I, expected to be complete in 2023, will transform the Mosaic Center's existing ballroom into a 3,700-square-foot rotating and dynamic special exhibit hall. Phase II, slated for 2024, will add a rocky coast, kelp forest and 45,000-gallon deep dive pool habitat featuring puffins, Atlantic salmon and other large fish species.

Phase III, expected to cap off the expansion plan in 2025, will bring a 200,000-gallon, three-space interconnected habitat to the outdoor plaza that will house sea lions and feature underwater viewing and overlook seating, as well as 39,500-gallon habitat for a colony of up to 30 African penguins.

Last year, seven penguins mysteriously died at The Florida Aquarium. The aquarium says this project will continue to help its commitment to preserving endangered species and conservation efforts.

Space Haus
A 39,500-gallon habitat will feature a colony of up to 30 African penguins.
“We are reinvigorating The Florida Aquarium by creating innovative and immersive habitats and exhibits, providing captivating guest experiences, and expanding our dynamic animal collection that advances our commitment to saving wildlife and wild places,” said Roger Germann, president and CEO. “Today we take a major step forward in building the world-class aquarium that Tampa Bay deserves.”

The creative design for the expansion project will be led by esteemed architectural design firm Space Haus, who also helped design The Shedd Aquarium, National Aquarium of New Zealand, and the Dallas and Kansas City Zoos.

The expansion project is The Florida Aquarium's first since its opening in 1995 and is a result historic visitor attendance and growing marketplace in recent years.