Skyfall will leave you shaken, not stirred

The 23rd Bond suggests the venerable series may need a new direction. Again. 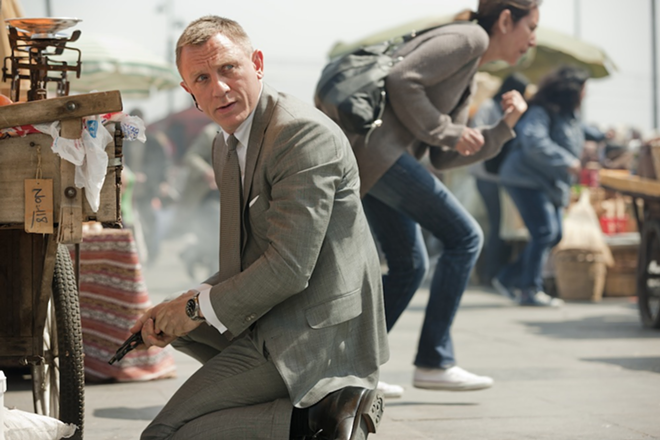 Francois Duhamel
BOND IS BACK: But has he detoured off the well-traveled road?

By Sean Connery’s third go-round as James Bond, the budding series delivered the definitive 007 screen adventure, Goldfinger. On Roger Moore’s third try, he finally came into his own with his personal best, The Spy Who Loved Me. So one might think that Daniel Craig’s third time in the role might bear some fruit, improving upon the subpar Quantum of Solace, which followed the rather excellent Casino Royale. But with Skyfall, the indications are that the Daniel Craig version of Bond we’ve seen thus far is the Bond we’re going to get from him — twitchy, damaged, sometimes looking shell-shocked. However, this dark realism rests uneasily with the traditional Bond elements that have been retained.

Director Sam Mendes (American Beauty, The Road to Perdition) delivers what may be the strangest Bond yet — a well-photographed, well-edited, but inconsistently paced actioner that feels, upon first viewing, like the most un-Bondian adventure yet. The pre-credit chase across the rooftops of Istanbul and atop a moving train is exciting and fluidly cut together by ace editor Stuart Baird — a marked improvement over the haphazard, difficult-to-follow action sequences in Quantum of Solace. Throughout the film, Mendes’ visuals sometimes add a hypnotic element, as during a nighttime fight in an office high-rise, backlit by digital billboards. The effect is woozy and dreamlike, as are a few other scenes and carefully composed shots.

For the third time since Neal Purvis and Robert Wade took on scriptwriting duties starting with 1995’s Goldeneye, the film focuses on a threat to either MI6 or Bond’s curt taskmaster, M. The film’s central antagonist is an ex-MI6 agent named Silva — played by Javier Bardem (No Country for Old Men), making with the worst, most unnecessary Bond villain dye job since Christopher Walken’s in A View to a Kill. For all their grasps at relevance and respectability, the filmmakers have no problem resorting to the scummy tactic of insinuating that his character’s abnormality is linked to his being gay.

From Goldeneye onward, Bond’s filmmakers have become progressively more self-conscious about the creation set forth by Terence Young, who directed the first two Bond adventures, Dr. No and From Russia With Love. Consensus from those who worked on those films is that Young was Bond, and that he crafted Connery into the gentleman killer that continues to captivate. In Skyfall, It’s clear now that those currently handling the Bond franchise are yearning to strike a middle ground between the character’s big-screen past and what they deem to be a more realistic, appropriate-to-the-times portrayal of the British provocateur. The problem with this strategy, as Skyfall brings into sharp relief, is that what made Bond wasn’t the Aston Martin, nor the Walther PPK, nor the allegiance to country. It was the man himself who gave those weapons, loyalties and Q’s gadgets their iconic status.

When Pierce Brosnan was Bond, M criticized his chauvinism as a way of atoning for the series’ past sins, I suppose. Now the screenwriters have turned their attention to the political times in which Bond operates. Skyfall repeatedly acknowledges a world that has gotten smaller, one where battles aren’t between easily identifiable participants like nation-states, but elusive, guerilla actors. It’s as if the screenwriters are trying to deflect criticism of Bond fighting for Queen and Country by making all the arguments against him themselves. But this strategy only works if they make the case for Bond. Which they don’t. They’d have been better off leaving the issue alone — by allowing Bond to be the larger-than-life character that makes him so appealing.

Skyfall is nearly two and a half hours long, and yet takes perplexing narrative shortcuts, moving Bond around while keeping viewers in the dark, and failing to give even a satisfyingly ridiculous explanation for Silva’s convoluted plan (one that has been lifted from The Dark Knight). Skyfall is fitfully entertaining for much of its running time, but gets a much-needed jolt of life during its final act, when it moves to Bond’s childhood home in Scotland. Here again, the filmmakers call attention to the elements that were part of the mystique of his backstory. What they haven’t figured out is how to humanize Bond without stripping him of his cool.