Soul of the City 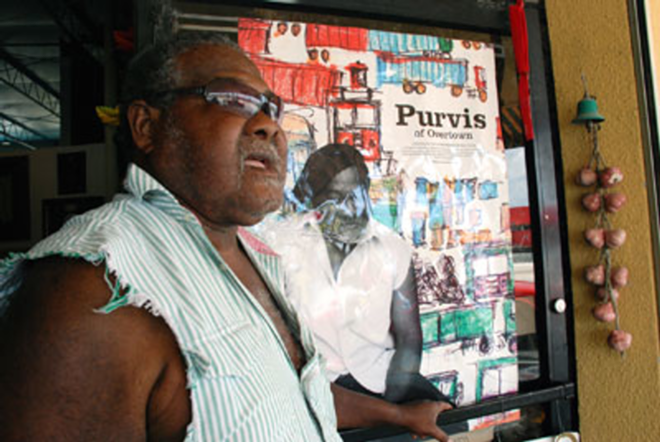 Megan Voeller
BIG MAN IN MIAMI: Purvis Young stands next to a poster of a documentary about him, Purvis Of Overtown.-

"If it's got a flat surface, watch out!" says Larry Clemons as he guides me through the cluttered depths of the Purvis Young Museum in Ft. Lauderdale. On the way to the back of the converted gas station, where works are stored, we pass empty water heaters, metal trays and shelves — even a toy pony — that have been covered with Young's iconic symbols in paint.

Oblong, Buddha-like heads, some with a halo, some without; contorting figures in a chain gang who might also be joyfully dancing; row after row of buildings in the urban landscape of Overtown, a formerly middle-class black neighborhood in Miami driven to poverty and crime — all, once you get to know them, unmistakably Young's iconography.

"Purvis, he just likes to paint on anything," explains Clemons, Young's long-time friend and collector, who owns the space and its permanent collection.

If you've seen either of the two current Bay area exhibits that feature Young's work, you'll know what Clemons means. At Compelling Visions, a survey of folk art at St. Pete's Museum of Fine Arts, it's a painting on the door of an old refrigerator: Cool mint green, the metal serves as a canvas for Young's urban landscape and writhing figures. At the Tampa Museum of Art, it's a wooden door, standing erect in the center of the gallery so you can walk around it to admire the human figures and horses traversing its surface.

It's pure coincidence that this hard-to-pin-down artist — whose rich imagination melds with social protest and a nod to masters like Van Gogh and Rembrandt (both of whom caused scandals in their day by painting "common" people and objects) — is being shown on both sides of the Bay.

The St. Pete exhibit offers a small taste of Young's work, presenting three awesome pieces owned by regional collectors amid work by many other artists. But the Tampa Museum show presents something a bit more exciting for Young fans: a selection from a donation of 91 of the artist's paintings to the museum by prominent Miami collectors Don and Mera Rubell and family.

The donation came in 2004, five years after the Rubells visited Young's Overtown studio and said "we'll take it" to his extensive inventory of more than 3,000 paintings on plywood and other found materials. In turn, the family vowed to donate the works to museums around the world on the condition that the institutions commit to sharing them regularly with patrons. And so the TMA scored a plum mini-collection of paintings by Young, making him the second-most extensively held artist in the museum's collection.

The purchase temporary cleaned Young out, but the prolific painter was soon at it again. He's been steadily churning out work since the 1960s, when a three-year jail stint solidified his commitment to become a visual artist. A decade later, he gained renown in Miami when he covered the exterior wall of a building visible from I-95 in Overtown with dozens of his paintings depicting the hopes and struggles of the neighborhood's mainly black residents. (Around this time, Overtown had the second highest per-capita murder rate of murder in the country behind Washington, D.C.; now it is in the throes of gentrification, Clemons says.)

The wall — called Good Bread Alley for the Bahamian bakers who occupied the neighborhood before an interstate bisected it — was later destroyed to make room for a public library.

These days, Purvis of Overtown — as he's called in a 2006 documentary currently making the festival circuit — is moving a bit more slowly. In February, he was given a new kidney after a long bout of diabetes and a three-year wait for the organ. Despite having the soul of a poet, he has always looked like the sort of strapping guy you wouldn't want to pick a fight with; when I visit him, Young, now 64, is on the cusp of dozing off in a sunlit chair on a warm Fort Lauderdale afternoon.

He deflects questions about what his paintings mean or stand for, preferring to discuss history and politics. "It's just my imagination," he says of the saints and angels — potential saviors? — who adorn his paintings. Later adding, "I don't want to press my beliefs on anybody."

What he does want to talk about — and suddenly a frown creases his forehead and Young looks a bit more awake — is what happened while he was getting that new kidney. A man who formerly worked as his art dealer changed the locks on Young's Miami studio to keep him out, Clemons says; a judge has since frozen the studio and its contents pending a lawsuit. That's why Young is sitting 30 miles north in Fort Lauderdale at Clemons' Gallery 721, which doubles as the Purvis Young Museum. A new dealer, friend Leon Rolle, sits nearby. Both urge Young to calm down and think positively about the future.

Their optimism springs in large part from planned projects with curator and historian William Arnett, who included Young in an expansive exhibit featuring African-American artists from the South called Souls Grown Deep in Atlanta during the Olympic Games. An accompanying two-volume book included about 40 pages on Young — and his painting also graced the cover.

"I think one of the reasons his work is so good and holds up over such a long period of time was he was not creating things for the taste of the art market or under the control of dealers and collectors," Arnett said from his office in Atlanta. "He was doing things for what I would say were all the right reasons; that is, to record and give dignity and respect to the people of his urban community."

Arnett is working on an expanded version of the Souls Grown Deep showcase, as well as a retrospective of Young's work to be held at an American art museum — he was not at liberty to disclose the particular location — in the next several years.

"Then he'll get the respect he should get," Arnett said, "which he does have now in some quarters, but not everywhere."