'Spider-Man: Far from Home' is the superhero movie that John Hughes never made, and a blast of much-needed fun

The MCU delivers a rollicking adventure long on laughs and light on world-ending crisis. Sony Pictures Entertainment Inc.
A new adventure means a new suit for Spider-Man, one of at least three that he debuts in Far from Home

You know, after helping defeat an intergalactic god, being dusted out of existence for five years and returning to a world fundamentally changed, it makes sense that a high-school teenager might just want to travel the world with his classmates and, finally, tell the girl how much he likes her.

Unfortunately, for Spider-Man, aka Peter Parker (Tom Holland), and thankfully, for fans of the Marvel Cinematic Universe, superheroes don’t get a day off.

Coming so quickly on the heels of Avengers: Endgame, the second big-screen adventure for Holland’s Spider-Man brings some much-needed levity back to the MCU. In fact, Spider-Man: Far from Home, at least for its first half, is possibly one of the most joyously uproarious comic book films yet from Marvel Studios.

From the “Peter Tingle” to his awkward realization of the budding friendship between Aunt May (Marissa Tomei) and Happy Hogan (Jon Favreau) to the John Hughes-inspired high-school hijinks once his class arrives in Venice, Italy, Far from Home paints a near-perfect picture of what it’s like to be young, to be feeling first love and to want nothing to do with adult responsibility.

The weight of Endgame reverberates throughout, however. There’s a nice summation of The Blip, as the MCU is now calling the disappearance and reappearance of half of humanity, and a lot of attention on Iron Man, aka Tony Stark, who is literally everywhere, immortalized in words, images and the expectation of a country waiting for a new hero to fill his shoes.

And, for the first time in a Holland-led Spider-Man adventure, he’s mostly flying solo without the help of any of his new Avengers pals, save for a burgeoning bromance with Mysterio, aka Quentin Beck (Jake Gyllenhaal), whom Peter meets by way of Nick Fury (Samuel L. Jackson), after Fury thoroughly hijacks his summer trip abroad.

Mysterio has arrived from a different Earth (a nice piggy-back off last year’s Spider-Man Into the Spider-Verse) to battle four Elementals, who can take the form of earth, fire, water and air, and who also supposedly killed Beck’s family on his planet, Earth 833. 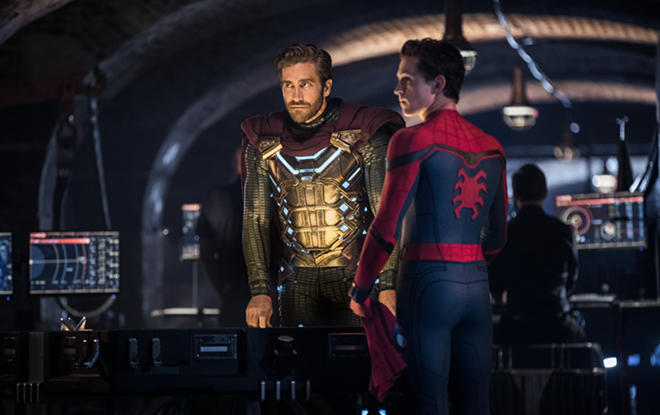 Jay Maidment/Sony Pictures Entertainment Inc.
Quentin Beck (Jake Gyllenhaal, left) is a stellar addition to the MCU, both as Mysterio and as a surrogate big brother to Peter Parker (Tom Holland).

As an aside, I can’t help but shout from the rooftops what I hope the introduction of the multiverse means for the MCU’s next phase. It literally opens all kinds of doors to all kinds of worlds, and that’s something to be excited about. I also can't overstate how awesome it is to see Mysterio so fully realized in a live-action film.

Fury wants Peter to partner up with Beck to help stop the last Elemental, which is about to wreak havoc in Prague. Peter wants nothing to do with that.

“Bitch, please,” Fury shoots back. “You’ve been to space.”

It wouldn’t be an MCU adventure without a McGuffin, and this time it comes in the form of E.D.I.T.H., a gift to Peter from Stark. I won’t spoil the acronym, it’s too good, but E.D.I.T.H. basically gives Peter control of all of Stark Industries’ massive security capabilities. It’s a heavy burden to put on a once-dead, now returned kid.

The trope works better this time around, though, because of the awkward phase that Peter finds himself in. Not yet a man, but no longer a boy, he’s wholly conflicted about where he belongs and what kind of hero he should be. It doesn’t help that’s he’s completely smitten with MJ (Zendaya, taking full control of her role) and her dark, subversive humor. This is the epic Peter-MJ romance that neither of the past iterations could nail.

That said, this McGuffin’s added weight helps amplify the frenetic second half of Far from Home, which includes one of the best, ripped-from-the-panels-of-a-comic-book sequences yet in an MCU film. It’s a delirious, dizzying, incredibly rendered blast of trippy mind-screw that will dazzle and delight longtime fans.

It’s also worth noting that there are two mid-and-post-credits scenes that you simply do not want to miss. The first is a literal game-changer for Spider-Man, and sets up the next installment, which should be his best solo outing yet. It also introduces a familiar face who’s been noticeably absent in the MCU. Let’s just say the preview crowd went wild.

The second scene is even more tantalizing. Let’s just say that if it does indeed provide a glimpse into what Kevin Feige has in store for the next 10 years, two things are certain: The Disney-20th Century Fox merger is going to reap serious dividends and fans are going to appreciate Captain Marvel even more for paving the path.