The 44th edition of Sundance kicked off Jan. 20. 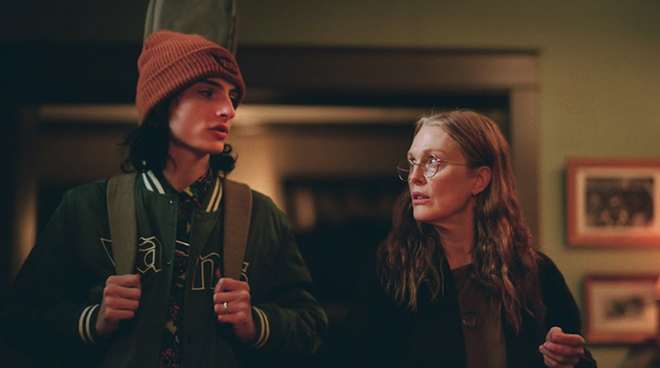 Courtesy of Sundance Institute | photo by Beth Garrabrant
Finn Wolfhard (L) and Julianne Moore appear in 'When You Finish Saving the World' by Jesse Eisenberg, an official selection of the Premieres section at the 2022 Sundance Film Festival.
On Jan. 20, the annual Sundance Film Festival kicked off its 44th year and its second as a wholly virtual event. After a last-minute pivot from a hybrid affair to a completely online experience, Sundance, the largest festival for independent film in the United States, will again showcase the newest talent and the hottest titles in the film world outside of the mainstream via its bespoke virtual platform. This year, 83 features, 59 shorts, six indie episodics, and 15 New Frontier virtual and augmented reality projects will bow at the festival and you can watch from anywhere in the United States. Over the course of the ten-day festival, seventeen Eckerd College students and one professor will be reporting on over a hundred of the festival’s offerings. You can follow our up-to-the-minute reports at Eckerd @ Sundance as well as more in-depth reporting here at Creative Loafing Tampa Bay.

In this time of uncertainty, and if selling out before the festival starts is any measure, then the three hottest tickets so far at Sundance this year share the quality of banking on known commodities. Sold-out opening night premiere “When You Finish Saving the World” marks Academy Award-nominated actor Jesse Eisenberg’s directorial debut and adaptation of his previous audio project that gently explores the disconnect between the personal and political values of a mother and son. With Julianne Moore and Finn Wolfhard (“Stranger Things”) headlining, this film, which already has distribution with A24, has already turned heads.

Tickets are also already sold out for both showings of writer-director Riley Stearns’s third feature,”Dual,” a dark science fiction comedy about the implications of using cloning to alleviate grief. In the small world of independent film, Stearns’s last film, the off-beat comedy about modern masculinity The Art of Self-Defense (2019), starred Eisenberg and Dual similarly sparkles with Karen Gillan ("Guardians of the Galaxy,"Jumanji: Welcome to the Jungle)" and Aaron Paul ("Breaking Bad") leading the cast.

Audiences similarly snapped up tickets for “Alice,” director Krystin Ver Linden’s debut feature, which features Keke Palmer (“Akeelah and the Bee,” “Madea’s Family Reunion”) in the title role of a thriller that takes its cues from Blaxploitation films and Southern Gothic narratives. With a a story that sounds similar to the Janelle Monae horror-thriller “Antebellum” but with its feet firmly rooted in fact, this exploration of the Black experience of slavery in all-but-name set in the 1970s also stars Jonny Lee Miller and Common. “Alice” already has distribution and looks to be in theaters by March.

This year’s Eckerd student correspondents also picked “Alice” and “When You Finish Saving the World” among their top 10 most anticipated films premiering at the festival. The Eckerd most anticipated list further includes:

Courtesy of Sundance Institute | photo by IFC Midnight
Siiri Solalinna appears in ‘Hatching’ by Hanna Bergholm, an official selection of the Midnight section at the 2022 Sundance Film Festival.
“Emergency” The latest feature from two-time Sundance alum director Carey Williams is another coming-of-age tale (after last year’s “R#J,” a wholly social-media retelling of “Romeo” and Juliet) that explores the excitement and anxiety of two Black college students who find their epic night of partying interrupted by the discovery of a white woman passed out on their living room floor.

“Emily the Criminal” Aubrey Plaza (“Parks and Rec”, “Black Bear”) plays the title role of a young woman saddled with student debt and a criminal record who falls into a shadow economy of stolen credit card purchases in the Los Angeles underworld.

“892” The debut feature from director Abi Damaris Corbin is based on the true story of a former US military veteran (John Boyega) who decides to rob a bank to get back what is rightfully his. This film features Michael K. Williams (“The Wire,” “Boardwalk Empire”) in his final screen role.

“Nanny” When an undocumented Senegalese immigrant enters the rarefied world of the Manhattan elite as a nanny, she discovers a world where her goal - the arrival of her young son in her new country - is accompanied by an unsettling supernatural presence. Writer-director Nikyatu Jusu’s debut feature suggests notes of Ousmane Sembène’s “Black Girl” meets “Atlantics.”

“Hatching” This coming-of-age horror tale explores the dark underbelly of the modern “perfect” suburban family. When a young daughter struggling with social connection brings home the egg of a wounded bird, she finds a bloody new family bond that tests the definition of blood ties.

"Piggy” Another coming-of-age horror film in Sundance’s Midnight section, this film explores the consequences of teen bullying and the moral implications of staying silent, although not in the ways one would expect.

“We Met in Virtual Reality” A fitting film for our times, this World Documentary entry is filmed entirely within virtual reality and follows couples who met in VR during the pandemic as they explore connection and identity in a space all their own.

“Fire of Love” This opening-night US documentary follows two lava-crossed volcanologists who may have lost their lives in a 1991 volcanic explosion in Japan but their images of so-called “bad earth” changed the field.
click to enlarge

Courtesy of Sundance Institute.
A still from 'Fire of Love' by Sara Dosa, an official selection of the U.S. Documentary Competition at the 2022 Sundance Film Festival.