Symons does a book signing for ‘Lies in Bone’ on Nov. 15. 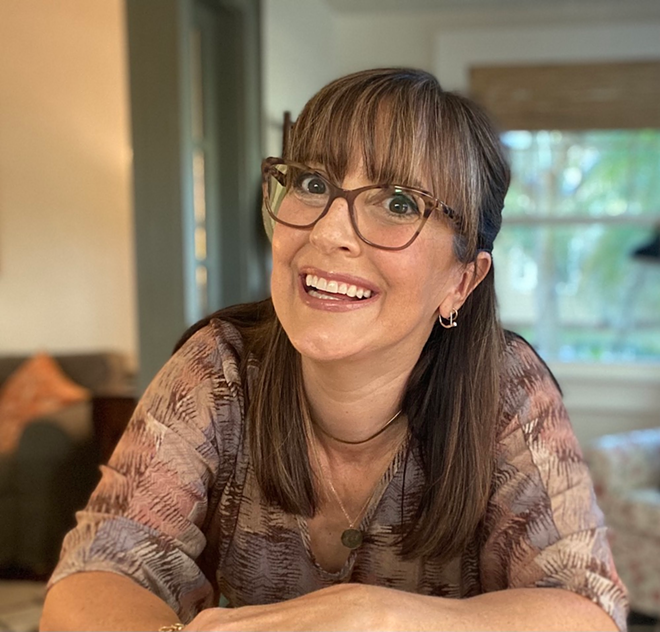 Natalie Symons has shifted gears to another promising career trajectory. The St. Petersburg-based writer/actor published her first novel, “Lies in Bone,” this year and has experienced an auspicious launch of her first book tour, which will make a stop at Tombolo Books on Nov. 15.

Set initially in the late-1970s and ‘80s, the expansive mystery weaves seamlessly in and out of narratives about a teenage Springsteen fan who confronts family dysfunction, abandonment, poverty and the cold case murder of her father’s younger brother 20 years ago.

Even at its most superficial level, “Lies in Bone” engages the reader as a heart-stopping work of suspense fiction. Peel back the layers, and you experience gothic family drama—a primal, no-holds-barred expedition into the basest of human instincts.

In “Lies in Bone,” we encounter the depraved, the homicidal, the delusional, the tragically lost and the unfortunates born to the wrong parents (in more ways than one).

Some scenes shout a cry for help for the mentally ill who fall under circumstances that further alienate them in Slippery Elm, the book’s fictitious, allegorical “cursed town.”

From misfortune to misfortune, Lies in Bone fearlessly probes the psychology and trauma behind child abduction and abandonment, humanizing the inhumane.

“Lies in Bone” is, no doubt, darker and grittier than Symons’ plays, but the book has its share of relatability also. A native of Buffalo, New York, Symons captures the earthiness and no-nonsenseness of the northern town depicted in Lies in Bone, but gleaming under the grit, a meditation on love, loyalty and family connection lets comforting rays of light in throughout.

From an androgynous BFF to the fearfully infamous family down the street to the little sister who stubbornly tromps around in her prodigal mom’s go-go boots, “Lies in Bone” captivates with its cortège of well-crafted characters while taking us on a tour de force of friendship, love and redemption.

“To me, it’s also life-affirming,” Symons told Creative Loafing Tampa Bay during a phone interview. “I always strive to tell stories that celebrate the resilience of the human spirit.”

Symons’ coming-of-age crime novel is just as character-driven and chock full of interpersonal dynamics as her earlier works, such as “Lark Eden,” and it offers the tasty bits of comical sass we’ve come to appreciate from her dysfunctional family opus “The Buffalo Kings.”

Despite the heaviness of what transpires, the novel also has the warmth of her recently premiered “The People Downstairs.”

“My editor says ‘Lies in Bone’ captures the reality of lower-income life in a neglected Rust Belt town,” Symons explained. “He calls it an intersection of literary fiction and mystery/thriller. Comparable titles would be ‘Mystic River’ by Dennis Lehane or ‘Sharp Objects’ by Gillian Flynn.”

In conversations over the course of her writing career, audience members and friends would tell Symons “I feel bad for laughing” at some of her tragic-comic moments. In “Buffalo Kings,” for instance, there’s a memorable scene centered on the patriarch of the family, who’s succumbing to dementia and snacking on cat food.

“Even though it’s cat food and it's funny, it's also horrifying,”  Symons said. “So, I find it interesting how humor catches audiences or readers off guard because they're enjoying it.”

Symons’ gift for genuine humor and pathos reminds us that when we’re authentic we never have to compromise believability.

“In rehearsals for ‘The People Downstairs,’ Chris did a lot of developmental work with the actors on finding the right tone so the play wouldn’t come across as too much like a farce,” Symons said, discussing the premiere of her most recent play at American Stage last year.

“It has to have that underpinning of reality, and sometimes I’ve found that it can go the other way and be too deadpan, so we have to work on making sure we’re not playing to the joke.”