'Strait of Gibraltar': Who do you trust?

Three and a half of five stars 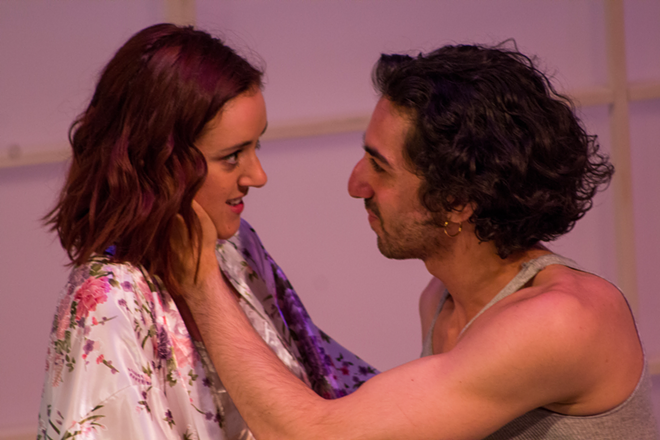 The best thing about Strait of Gibraltar, Andrea Lepcio’s play currently showing at American Stage in a fine production, is the ambiguity of almost all of Act One. Here we’re presented with what looks like the beginning of an innocent love affair between young Jewish American Miriam (the talented Jordan Mann) and the ingratiating Moroccan soccer player Sameer (perfectly cast Joe Joseph). But as the relationship proceeds, certain details begin to stand out — meaningfully or not. We learn that Sameer has overstayed his visa and is in the United States illegally. We also find that Sameer wants Miriam to open a bank account under her name so that he can deposit Moroccan cash into it and supposedly bankroll a business venture. Because Sameer is Muslim, because Miriam too coincidentally works at a bank, she suspects the worst — that her new lover means to exploit her in the service of money laundering, perhaps even with terrorist intentions. She angrily sends him away — and then tries to determine the truth for herself. It may be, it turns out, that Sameer is, after all, a soft-hearted good guy just trying to generate some cash so he can help his beleaguered sister back in Morocco. Or it may be that Sameer’s machinations are so shrewd, Miriam is missing all the red flags. As she — and we — try to work through this conundrum, we’re reminded of the paranoia that’s gripped this nation since 9/11. Or is it paranoia? Can we ever again afford to let down our guard?

Unfortunately, this mystery is solved rather rapidly in Act Two, so for the last half-hour or so of the play, we just witness variations on a single, simple theme re: the Patriot Act. Still, the acting and directing of the American Stage production are usually so excellent, the play always remains interesting, even when predictable. Actor Joseph as Sameer deserves a lot of the credit. For the entirety of the first act, he’s either a lovable foreigner or a nefarious alien, and it’s great fun playing detective and trying to see through his façade (or is that his real self?). As his paramour — or, perhaps, victim — Mann is wonderfully convincing: she’s been single in New York for too long, so she may be extra-vulnerable to sweet-talking Sameer. Further, she’s assertive and sexually aggressive while still exuding a kind of naïveté that might be just the ticket for a cunning predator. Chris Jackson plays Miriam’s shallow attorney friend Tripp — it’s at his party that she meets Sameer — and it’s one of his pristine performances, so crisp and clean it shines. As Miriam’s’ mother, Angela Bond is nicely complex, loving her daughter without fail, but instantly willing to believe the worst about Sameer and any other Muslim who dares visit our shores. As Sameer’s sister Amina, Mari Vial-Golden is just adequate, not fully convincing us, as she should, that she has a daring sexual life of her own, but in two very small roles, Kody Hopkins and Tarilabo Koripamo are satisfactory. Jim Sorensen’s staging is quick-moving and intelligent, working especially well in some sequences in Act Two wherein two related but different actions alternate with each other. Stephen Jones’s hyper-modern living room set is attractive and features three highly placed screens on which various videos appear to illustrate the action below; my favorites were the many views of busy Manhattan, including Times Square and Washington Square Park. Katrina Stevenson’s costumes are, as always, terrific, from Sameer’s casually sloppy American look to Tripp’s ostentatious power suit.

There are two problems in Gibraltar that weaken the play. First, in Act One, we discover that Miriam has written a novel about Israel and the West Bank — a prominent subject, surely, but one which has next to no significance for the rest of the evening. More problematically, in Act Two, an episode in Miriam’s life as a bank employee comes to have a powerful effect on her, even though it has nothing at all to do with her relationship with Sameer. This late intrusion serves a purpose — it keeps Miriam in trouble — but it’s an extraneous trouble that seems somewhat dishonest. Much more appropriate, happily, is the title of the play: the Strait of Gibraltar, we’re told, is where the Atlantic meets the Mediterranean — where American woman and Moroccan man can merge, you might say. With the superb acting of Mann and Joseph, with this production’s taut direction and splendid design, we’re confronted with that merger in all its hopefulness — and anxiety.