St. Petersburg’s first ever Comic Con happens at The Coliseum next year 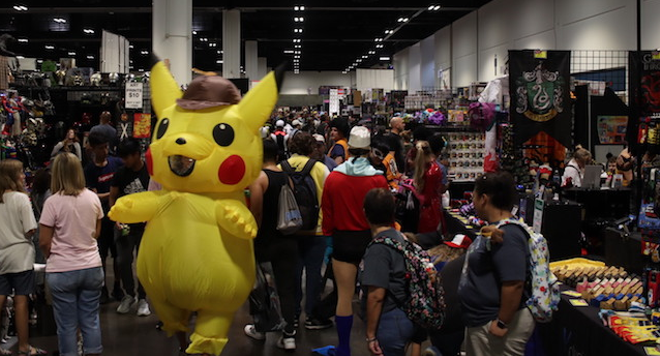 Photo by Chris Fasick
The 2019 Tampa Bay Comic Con.
For years, St. Pete cosplay enthusiasts, comic fans and weebs alike had to travel to Tampa—and sometimes to smaller cities in Florida—to partake in conventions and celebrations. But those days are in the past, as the first St. Petersburg Comic Con happens Jan. 8-9 at The Coliseum.

Downtown St. Pete’s Coliseum usually hosts jazz concerts or business expos, but during the first weekend of the new year, it will be jam-packed with all things anime, sci-fi, fantasy and cosplay. “It’s long past time for St. Petersburg, a world-wide destination city, to have a high-end, annual comic convention,” said Dewey Caruthers, who is organizing the con with his teenage daughters Blu and Scarlet.

Single day passes run for $20, while a weekend pass is only $10 more. You can also scoop weekend VIP tickets for $100, which gets you early access to the convention, a goody bag and entry into a VIP after party. Kids 9 years old and under get in free, but they do still need a ticket. For all ticketing information, visit stpete.floridacomiccons.com.

Artists featured in the upcoming Comic-Con include voice actors Erica Schroeder, known for her work on "Pokemon," "Sonic the Hedgehog" and "Yu-Gi-Oh," and Mike McFarland, who voices characters on "Dragon Ball," "Attack on Titan," and "Fullmetal Alchemist." Alex Saviuk—the man behind works like Superman and The Flash—is among the few comic artists also featured at St. Pete’s Comic Con.

There will also be cosplay competitions each night, and its winners might get a feature in the Florida Cosplay Digital Magazine, among cash and other prizes.

Caruthers and his daughters— event organizers and self-identified “local nerd family”— encourage anyone who is remotely interested in cosplay, comics or science fiction to come out and enjoy the Sunshine City's first ever Comic Con.

Kyla Fields is the Managing Editor of Creative Loafing Tampa Bay who started their journey at CL as summer 2019 intern. They are the proud owner of a charming, sausage-shaped, four-year-old rescue mutt named Piña.
Scroll to read more Events & Film articles