Summer Guide 2017: How the Avalon got to be St. Pete's coolest new hotel

David Fischer came in and ZaZoo'd it. 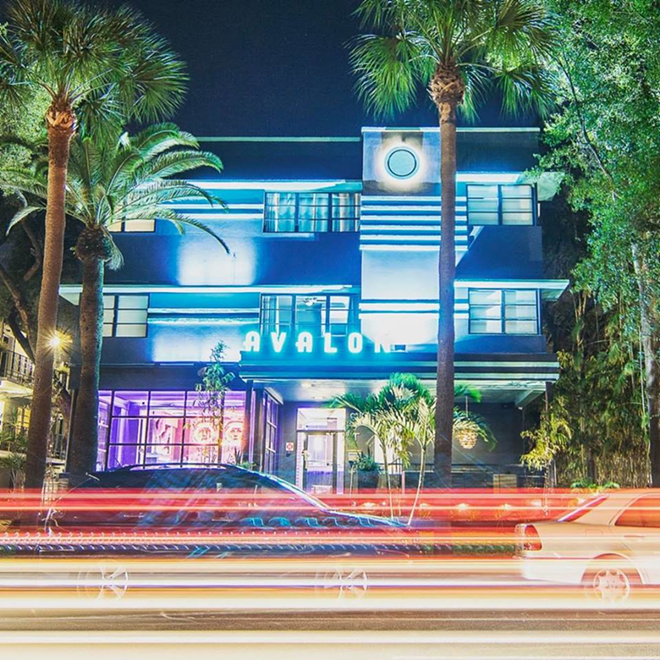 Avalon on Facebook
The Avalon now: A sleek return to its Art Deco roots.

Last year, the murmurings began. What’s that Avalon place in St. Pete on 4th Ave. N. next to the Hollander? Did they move it here from South Beach? With its sleek Deco-esque lines, artful use of neon and retro-chic interior (complete with a diptych of ’60s supermodel Jean Shrimpton), it really did look like a transplant from Collins Avenue, sprung from the imagination of some 21st-century Ian Schrager.

In fact, the Avalon has been around since 1930, most recently serving as an extended stay hotel. But it got a new lease on life in 2015 when it was purchased by Michael Andon, owner of the Hollander. Having turned that former abandoned Travelodge into a destination hip enough to help St. Petersburg make the New York Times’s list of 52 Places to Go in 2014 (a big photo of the Hollander’s Tap Room was used for illustration), he went to work forging a similar transformation on his shabby next-door neighbor.

Courtesy Nick Herring
The Avalon before: An unremarkable extended-stay hotel.
To do the makeover, he tapped designer David Fischer, owner of the Best of the Bay-winning boutique ZaZoo’d. According to Fischer (and confirmed by the properties’ GM, Nick Herring), Andon took one look at the eclectic, witty inventory of Fischer’s Central Avenue shop and figured this was the guy he needed.

Outside, Fischer added neon-lit horizontal accents (via styrofoam reveals) to mimic the roofline. Inside, he took inspiration from artworks he’d collected, like a reproduction of Richard Avedon’s famous photo of Shrimpton-as-astronaut, and strove overall to “do things different, not something you’d see in a normal hotel.” The lobby — all hot pink neon and white banquettes, furry pillows and shiny surfaces — is a case in point. The hotel rooms, too, took a cue from his desire to “dial it up a bit,”  every room given “a different pop of color” against a palette of grey and white, with humorous European-travel touches like steamer trunks as bureaus. It all feels vaguely nautical (as do many items in ZaZoo’d), as if you were shipping out on a trans-Atlantic cruise with Noel Coward and Zsa Zsa. It opened to the public at the end of November, and it’s already doing as well in bookings as the Hollander, says Herring. (And guests get to share in the amenities of The Hollander, including its pool, shuttle service and restaurant.)

Happily for St. Pete, Andon ain’t stopping with the Avalon. He has purchased the 1927-vintage Randolph on Williams Park and is turning that into “another cool hotel in town,” says Fischer, who will once more be the designer; he says “it will feel and look totally different” from the Avalon. Andon is also partnering with Jason Mitow, the owner of Lucky Dill in Palm Harbor (who recommended Fischer to Andon), on a project on Tampa’s Boy Scout Boulevard. With Fischer as designer, he’ll open Lucky Dill and two new concepts — the NYKL (New York Kitchen and Lounge) and a speakeasy called Stache — in the former location of Boizao Steakhouse.

A former VP with Darden Restaurants, Fischer knows from restaurants. With these and other projects, one could argue that his sense of what’s cool is being put to much better use than, say, building out another Olive Garden.

Note: The Avalon was a stop during the the SunLit Festival’s Literary Walking Tour last month, and the Jean Shrimpton diptych inspired me to wax poetic. Here’s what I wrote.