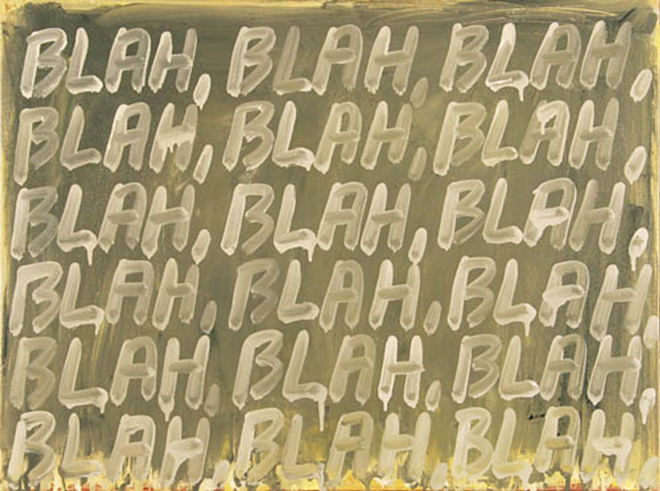 A recent issue of Newsweek highlighted collectors willing to purchase artworks that exist only as concepts: the idea of an installation rather than the installation itself, or a performance piece that may never be recreated.

One of those collectors, Aaron Levine, explained his predilections this way: "I think good art is when I can hear the ideas bouncing off each other in my brain."

I mentioned that quote recently to Todd Smith, executive director of the Tampa Museum of Art, and he laughed. It might, he suggested, make a good alternate title to the show opening this week at the museum, Syntax: Text and Symbols for a New Generation: Selections from the Hadley Martin Fisher Collection.

Ideas will indeed be bouncing off the walls in Syntax. And even though the subject matter — text-based work by conceptual artists — may sound off-puttingly dry and art-speaky, the show promises to be not just intellectually stimulating, but quite a bit of fun.

After all, when one of the works is called "Blah, Blah, Blah" — Mel Bochner's oil painting of those words repeated over and over — it's clear that some witty sensibilities are at play here. If the painting seems at first glance to be just a visual joke, a mockery of art-crit over-thinking, it also focuses the attention on the words themselves. Bochner's "white noise," Smith says, "is as meaningful as a painted representation of two people in a conversation. It's about what we mean by conversation — what passes for conversation."

Art has been a means of message-making since Paleolithic Picassos painted on cave walls. Even as visual artists in the 20th century were rejecting the idea that art should teach or elevate, they were nevertheless sending a message, challenging preconceived notions about the nature of art creation itself. The conceptual artists in Syntax have deconstructed such notions even further, moving away from objects to experiences, to words on canvas, to fundamental questions of what we talk about when we talk about art.

Syntax covers a wide range of text-based work. It presents the pioneers — people like Bochner and John Baldessari and Josuf Kosuth, who fired the "opening shots across the bow" in the 1960s, says Smith — and also "looks at artists 30 and 40 years later who have moved beyond text-based art and post-painterly abstraction and take from each of those an aesthetic they feel comfortable with."

That means a striking variety not only in content but in medium. Materials include gunpowder, a door, aluminum, a wooden wagon wheel, charcoal animation, Elmer's Glue, neon, a 1966 Plymouth GTX Hood and — according to one wonderfully succinct description — "steel and air."

It perhaps goes without saying that this is a show with built-in appeal for word nerds (like, say, newspaper editors). Fiona Banner's "The Bastard Punctuation," for instance, can be read as part homage, part rebellion against the tyranny of commas and semi-colons. Greely Myatt's "Speaks Volumes" incorporates empty speech bubbles, reminiscent of the ones used in comic strips (and Pop Art), into what Smith calls a "free-standing beautiful book," more than 7 feet tall and made of steel.

The language of maps also comes into play, as in Sean Landers' obsessive mapping of his own thoughts, or in "Daylight Map" by Olofur Eliasson, best known for his spectacular NYC waterfall installations in 2008. Another current art star, the sound and video artist Christian Marclay ("The Clock"), is represented here by an uncharacteristically quiet piece, "Silence (the Electric Chair)," a haunting reflection on who (or what) is being silenced.

A little more than a week before opening, Smith still wasn't sure how everything in this multi-faceted exhibition would be installed in TMA's galleries. "Of all the shows we've done, it has posed the most challenge from an installation point of view because the media are so disparate. There are so many interrelationships that happen ... we're making changes every hour."

All of the work in Syntax comes from the collection of one man, Hadley Martin Fisher, grandson of the revered art-world benefactor Emily Fisher Landau (she recently pledged 367 works to NYC's Whitney Museum of American Art). It represents the museum's second fruitful partnership with Miami collectors, following two well-received shows (The Hidden City and Realism) derived from the Martin Z. Margulies Foundation. Fisher is a recent arrival in Miami with a strong affinity for text-based art; he has lent works before, says Smith, "but never on this scale."

Smith is confident that local museum-goers will respond to the show, as long as they approach the work with an inquisitive spirit.

"All we ask is that you meet the artist halfway... to be curious. This is a show that requires a different way of interacting with it than painted landscapes in gilded frames."