So, how's that new book coming: Mars ain't the place to raise your kids One day in mid-October my wife peered over the top of her laptop screen and asked, “How much is too much for us to take the kids to see Bruno Mars on Thursday?”

There are two answers to this question. They are different, but both are honest. The first answer was to a different interpretation of her question: “Hey Jon, do you want to cross the Howard Frankland Bridge on a Thursday night, park, and go to a sold-out arena concert that won’t start until 9:30 with our seven and four year-old children and how much is too much to pay?” The answer to that question is, “Dear God, are you mad? I should be the one getting paid! But I love my family and we’re the coolest parents ever, so I’d say $150 is reasonable for four seats to this night of pure magic.”

The answer that came out of my mouth was simpler, “(Sighs, painfully) $150 is reasonable.”

This number was then converted from dollars to “Momcoin.” My wife took this information, combined it with a painful childhood memory of missing out on seeing Michael Jackson at his peak, multiplied it by missing out when I took the kids to see Train ($10 Groupon) and promptly bought the tickets.

There’s a reason I don’t check the bank statements. My wife is a money conscious person, but — to her credit — she will not be denied a good experience. We sit on thrift store furniture so we can take long trips and stay in nice places. We drive cars whose combined age is 21 years so we can dine out. And our kids will be attending state universities because we went to see Bruno Mars.

The kids do love their Bruno Mars, and they loved the fact that the concert would keep them up so late that they would miss school on Friday (Yay, another bonus for Dad!). Thursday came, we hopped in the Toyota minivan and headed to Tampa, leaving late, to avoid traffic (and the opening act). But then I remembered that it doesn’t matter what time you go to Tampa, there’s always a 30 minute back-up. In this case, a lane on 275 was closed from its nightly wreck and traffic was backed up almost to “the hump” at 8pm. Any time the kids hear that we’re going to Tampa, they hang their heads in despair and groan, “Is there gonna be traffic?” Perhaps it was the time we tried to go to the circus at Amalie Arena and you literally couldn’t get there because every road was still closed or routed the wrong way because Gasparilla had ended six hours prior. I know — what were we thinking? It was so bad, the venue literally gave us front row tickets for the next day.

But this article isn’t about how shitty Tampa traffic is, because we all know Tampa has a super mass-transit plan in the works. We made it to the arena, parked for a reasonable $12 and entered the venue just as the opening act was finishing. Oh, did I say, “entered the venue”? When are they going to fix the entrance process here? I went to Tom Petty’s last Tampa show, where 18,000 fans filtered in over a period of 90 minutes, and the one and only entrance (for people not in suites) was jammed the entire time. No different for Bruno Mars, except there was a helpful usher who said, “Hey, there’s another entrance around the corner and down the stairs with NO LINE.” No line! Sweet!

However, the lone soul guarding that entrance (picture your 20-year-old nephew, wearing your uncle’s suit) didn’t get the memo that someone in front was sending him 2,000 people. He turned us away, but not before my wife had him considering an easier profession, like law enforcement or Middle East peace negotiator. Then we spotted another tiny entrance. Up a narrow set of stairs was the Chase Club Entrance with two ticket takers. Here’s a tip: Anyone can use the Chase Club Entrance, but no one knows it. Go do it!

So we get in, climb to our seats and get ready for the magic. We’re expert parents, so I made a run for popcorn and waters for the kids. Our kids would sit happily through the London blitz if they have popcorn. But this is where the cracks in our parenting prowess started to appear. I go to a lot of live shows, and rarely consider how it would be through the eyes of a child, because my children are not there. I’m always excited when I see dads with their young sons with them because I look forward to taking my kids to shows that my wife won’t tolerate. I took the kids to see Train because Train is so catchy, and palatable, the kids love them and I can appreciate that Train is not going to do a 15-minute jam on "Hey Soul Sister," and they aren’t cool enough to bring out the DMB, Chesney, Buffett been-drunk-since-3-o’clock-throwing-up-passing-out party bus crowd. It was way better than a theme park for everyone involved.

But this is Bruno Mars, on a school night. The music on the PA while they set up Bruno’s stage was educational. Some of the words weren’t even curse words… one song used the word ‘anus’ prolifically, which is just… weird. Now, my kids are not sheltered. They know all the four letter words and as my daughter explained, “You never say goddammit.”

“Unless you spill something.”

My wife even gave our stressed out kids permission to swear during Hurricane Irma, at which point my son tried out a word and promptly burst into tears, and my daughter ran around gleefully screaming, “Dammit, dammit, dammit!” That experiment lasted 45 seconds.

So we were having good laugh over the dirty music and eagerly awaiting a guy who in my opinion could be the offspring of Michael Jackson and James Brown. He may not be in my favorite genre of music (43-year-old-white-guy stuff they don’t play on the radio), but Bruno Mars is about as good a performer as you’ll ever see. The lights dimmed, Bruno burst on to the stage, the band was tight, the crowd went wild, and boom! The pyrotechnics hit and I looked down and both kids were holding their ears, in tears, like they were in a World War I trench.

Good, smart, experienced parents would have brought ear plugs, but I don’t think it would have made a difference. (I actually did bring plugs to the Train show, but it was more trouble putting them in their ears every three minutes.) I figured nose-bleed seats and Bruno Mars crooning about how we are amazing just the way we are wouldn’t be like my first concert (Metallica circa 1992). The truth is, good, smart, experienced parents would not have brought two young children to the show. After two songs we hit the exits.

Now, this may seem like it was a huge waste of time and money — and that is one way to look at it. But I figure creating a traumatic experience for my four-year-old may save me thousands of dollars and hours of pain in future Taylor Swift/Shawn Mendes/Justin Bieber excursions. All I had to do was sit through seven minutes of Bruno Mars. If I’ve played my cards right, my kids will instead ask to go see Sister Hazel or Indigo Girls in Coachman Park, or some other saccharine affair. Hell, kids, I’ll drop you off and leave you unattended at that show; here’s $50. 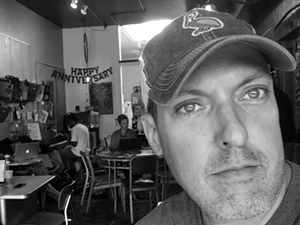 Bad genes forced Jonathan Kile to give up a life as traveling salesman. Good genes make him a fine and — some would say handsome — writer. His first book, The Grandfather Clock is available for on Amazon. The long awaited sequel, The Napoleon Bloom, is being birthed before your very eyes. He serves on the board of Keep St. Pete Lit and you can reach him here.