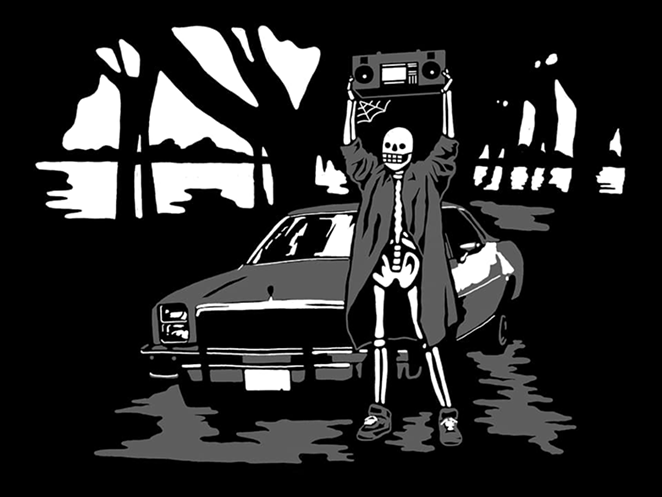 artbychrispreston/Facebook
Tampa artist Chris Preston won’t say anything about the movies that’ll be playing on screen at ‘Dead Cinema,’ but this could be a hint.

Local artist Chris Preston is putting a macabre spin on his love of movies for his “Dead Cinema: an Art Exhibit” at the Corner Club, Saturday, July 24.

Think of classic movie scenes, like Lloyd Dobler holding a boombox over his head in the late-’80s classic “Say Anything.” In our mind, Dobler will always be a trenchcoat-wearing heartbroken teenager.

“But what if time wasn't kind to these scenes? What if the subjects were destined to repeat the same actions again and again, as the years took toll on their bodies?” the event page asks.

Preston’s had numerous shows over the years, but this is the first time he’s focused on film. How’d he get the idea?

“To quote Dan Akyroyd from ‘Ghostbusters’ ‘It just popped in there,’” Preston told Creative Loafing Tampa Bay in an email.

Preston—also known as DJ Cub during various weekly gigs including Wednesday nights at the West River venue Hooch and Hive—was the Skatepark of Tampa’s Art Director and Graphic Designer until he got furloughed last year.

After getting laid off, he started his own graphic design company, Bluebird Hill Design, which “feels like things are starting to ramp up.  Preston also works part time at Seminole Heights’ vegan restaurant 3 Dot Dash.“I never thought I'd go back to working in a hot kitchen, but I have to supplement my vegan junk food addiction somehow,” he said.

Except for one year at an arts school in high school and an Associates of Science in Graphic Arts, Preston has had no formal fine art training but he’s “been drawing since I could hold a pencil.”

His staggering talent has been noticed, Preston has done projects for some pretty big companies including Converse, Cigar City Brewing, Vans and PBR. Plus countless, astonishing gig posters and the cover of CL’s  2017 Music Issue.

Though Preston works in a variety of mediums—usually influenced by Dada, cubist and surrealist styles—for the “Dead Cinema” show it’ll be “mix of digital prints and acrylic pen on black paper.”

When asked what specific movies he’ll be showing Preston replied “I probably shouldn't Say Anything. It's Risky Business.”

For more information, go to  the “Dead Cinema” event page.

Freelance contributor Stephanie Powers started her media career as an Editorial Assistant long ago when the Tampa Bay Times was still called the St. Petersburg Times. After stints in Chicago and Los Angeles, where she studied improvisation at Second City Hollywood, she came back to Tampa and stayed put.She soon...
More
Scroll to read more Events & Film articles
Join the Creative Loafing Tampa Bay Press Club