Meet the three artists whose unique art is currently on display at the Leepa-Rattner Museum of Art in Tarpon Springs.

When I first saw ads for the Leepa-Rattner Museum of Art’s latest exhibition, Unexpected: Art by Alternative Means, I knew it’d be a perfect fit for Creative Loafing. First of all, we’re an Alt weekly, which means we love anything alternative. Second, we’re called Creative Loafing for a reason. We were made to celebrate all things creative, and what’s more creative than developing your own unique artistic process?

Unexpected: Art by Alternative Means highlights the creative processes of three contemporary artists, all of whom were Tampa Bay locals at some point in time. Nathan Beard, who developed a uniquely layered style of painting using painter’s tape, is based in St. Pete. International artist Akiko Kotani, known for drawing with thread, now lives in Gulfport, FL. Rob Tarbell, known for incorporating smoke into his artwork, lived in Tampa Bay for years before recently moving to Virginia to accept a teaching position at Virginia Commonwealth University. It may not be obvious at first, but when you look at Nathan Beard’s work in Unexpected: Art by Alternative Means, you are viewing his progression as an artist. It’s most apparent when you look at Beard’s "Exit Music #6, which Beard refers to as the “aha moment” that informed the entire series.

Beard didn’t like it at first, so he dragged a rag across the canvas, left to right, to remove paint. The back and forth motion of the rag became the signature swirls you now see throughout Beard’s Exit Music series.

Beard still wasn’t happy with "Exit Music #6", so he added in some painter’s tape to bring stripes into the painting. They look a lot like mini blinds here, Beard tells me. He now prefers curved lines.

With a name like Exit Music, I wondered if Beard listens to music while painting. He never used to, but lately he’s started.

“The Exit Music series is not so much about music as it is a metaphor for moving from one space to another,” says Beard, “and from the imaginary world back to real life.”

That metaphor is just one level of Exit Music. The series also reflects on the ubiquity of patterns found in nature and in human behavior. "Exit Music #71" looks a lot like DNA replication, but Beard tells me it is also about how we “receive, culminate, and form ideas,” often burrowing or building upon ideas of the past.

Beard refers to "Life Lines" as the culminating piece. Here the transitions of Exit Music are translated into stages of life. Beard collected four pieces of information for each of his ancestors, going back to the 1870s: birth date, date they left home, date they got married, and date of death.

Each life became a line on Beard’s abstracted family tree. Each dot someone being born. When two people are married, their lines cross. When they die, their lines terminate. “I wanted to see what a family tree looks like when you move it through time and space,” says Beard, “The way we experience life is very linear — past, present, future — but the universe itself works in a very non-linear way. I wanted to link the two.” 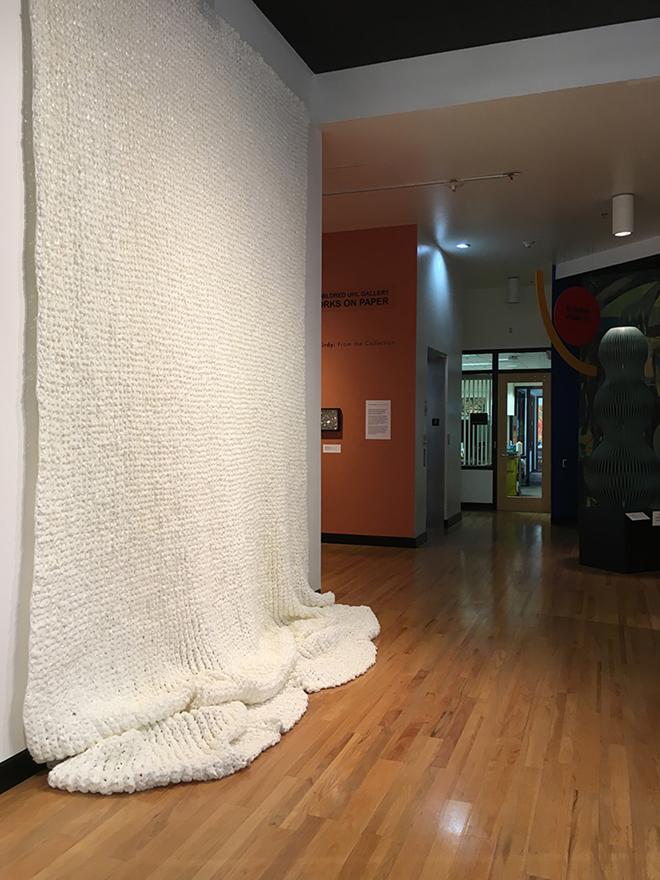 "Melting Wall" by Akiko Kotani; Photo by Jennifer Ring
Is it bad that I want to curl up in this "blanket" and take a nap?

Beard also expressed a desire to incorporate natural patterns here, similar to microbial fungi or a neuronal web. With both "Life Lines" and "Exit Music #71," there are multiple patterns generated by Beard’s unique layering process.

When I look at his paintings, it’s like staring into infinity. There is seemingly no end to the layers, yet Beard tells me some have as few as three layers. “On each layer there is more than one thing going on,” he says. Still, the end result is pure magic if you ask me.

Akiko Kotani’s artwork hangs from ceilings and cascades down walls at the LRMA. It looks like it was made for this space, and it probably was. “I always imagined my work in a gallery setting,” Kotani tells me.

Kotani got her MFA in weaving — it’s not an art form you typically see on gallery walls. After graduating, she started teaching both weaving and drawing. It was only natural she eventually combined the two.

Kotani’s transformation from “weaving” to “drawing with silk” distinguishes her work from traditional weaving. She is a master minimalist, limiting her palette mostly to shades of white — a symbol for purity. You can see this in "Melting Walls," where texture becomes the standout detail within a solitary shade of white. Kotani describes "Melting Walls" as 45-gallon plastic bags cut into strips and “crocheted into a network of exaggerated stitches.”

Kotani drew "The Black Sea" in silk by narrowing it down to a single detail: the sparkles of light reflected off the waves. Each sparkle became a dot of thread on Kotani’s canvas. I’m not sure I would have recognized this as the Black Sea without Kotani’s title, but it does possess the same calming effect I experience when looking out upon a large expanse of water.

In "Storm Daniel," a tropical storm is presented as reminiscent of a NOAA satellite image, drawn as a series of circles in black silk upon white theatrical scrim.

When applying to have her work shown in galleries, she refers to it as drawings. “I always thought of it as an art piece, and thank God it was accepted as such,” says Kotani, “otherwise, I’d have to have a real conversation with myself.”

If you hold a cigarette next to a piece of paper, absolutely nothing happens. This is what happened, or rather what didn’t happen, when artist Rob Tarbell first tried it about 12 years ago. Yet Tarbell knew, from the Sistine Chapel, that smoke accumulation leads to a darkening of sorts.

Rather than seeing smoke as something that obscures art, as with the Sistine Chapel, Tarbell saw it as something that could create art. He burned different objects until he came upon his current favorites — credit cards, gift cards and 35 mm film (Toxic, by the way. Don’t do this at home.). Then he directed the flame as a painter would direct their paintbrush.

Tarbell’s Diagnostics series looks like drawings made with smoke on paper. The series was inspired by an old parlor trick popular in the early 1900s called “ghost of my friend.” The way it works: You have your friend sign a piece of paper. While the ink is still wet, you fold the paper in half. Thus the signature becomes an ink blot like those psychologists use.

In psychology it’s called a Rorschach test, and there’s a book for interpreting these. Tarbell used Exner’s The Rorschach, Basic Foundations and Principles of Interpretation to analyze and name the images. Then he re-created them in smoke.

Five of these smoky inkblots reside in the hallway between galleries at the Leepa-Rattner Museum of Art. They look skeletal to me, like x-ray images. I rarely see what’s in the title. In "Follies of the Wise, or Spider" I don’t see a spider at all. I see a skeleton. In "Airplane, Lobster," I see a bulldog with a beard wearing a headdress.

In "Alligator, Crown,"  I see a human skull. Below, the torso appears filled with gears, like the internal workings of a clock. The stacked shape makes the assemblage look like a demented snowman. Or perhaps that bottom segment is a frog.

In "Bear, Dog, Human,"  I do see a human face, but it looks like face of a villain or the face of death.

The interesting thing about the Diagnostics series is that it forces you to look inside yourself and question why you are seeing what you are seeing.

There are four different Tarbell series on display at LRMA, but it is the ghostly, skeletal Diagnostics series that still haunts me (and I mean that as a compliment).

If you watch the videos at LRMA, playing on a 26 minute loop, you’ll see Rob Tarbell sending smoke onto a canvas above his head, Nathan Beard cutting unbelievably thin strips of tape and applying them to canvas, and Akiko Kotani stitching her lines of silk to form drawings in fabric. LRMA’s Unexpected: Art by Alternative Means is a celebration of invention and creativity you really shouldn’t miss.