Tampa Bay Bucs get a guy they need, and all the winners and losers from last night

While Joe Tryon might not immediately help the Bucs this year, it will certainly pay off in the future. 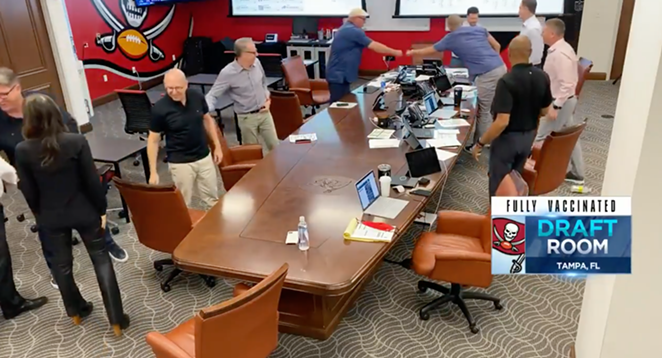 That was a really fun draft.

The Bears traded up to get their QB of the future in former Ohio State man Justin Fields, the Patriots stood by and still got their man in Mac Jones, and the Packers still continue to piss off Aaron Rodgers by going another year without taking a skill position guy in the first round. Actually, they managed to anger him so much, that there have been reports circulating that Rodgers is adamant that he will not be returning to Green Bay.

But, the Bucs had a plethora of options at no. 32. My guy Azeez Ojulari was there, wide receiver Elijah Moore out of Ole Miss was there, linebacker Jeremiah Owusu-Koramoah out of Notre Dame was there, and interior lineman Christian Barmore out of Bama, but they went with a project guy in pass rusher Joe Tryon out of Washington.

Never heard of him? Join the club. But, he fills a need for the Bucs. Jason Pierre-Paul is in the last year of his contract, and in the Bucs’ defense they need a good pass rush. So while this pick might not immediately help the Bucs this year, it will certainly pay off in the future. Plus, you can never have enough depth on the edge.

As for who Tryon is, he’s 6 feet 5 inches, 262 pounds and while he’s known mostly for his ability to get after the quarterback, a lot of people compare him to T.J. Watt, the outside linebacker for the Pittsburgh Steelers. If he turns out to be even half the player Watt is… sheesh.

Saved the best for last.

Now let’s get to grading the other teams in the NFC South:

Another year, another strange draft choice by the Saints. You’d think after losing their number two corner, their number two receiver, their starting tight end, and their starting quarterback, they’d use their first round pick to address one of those needs. Nope. They went with a late-riser in defensive end Payton Turner out of Houston. I just don’t get it. The cornerback position was a huge need, and Asante Samuel, Jr. out of FSU was there. They needed another guy to line up next to Michael Thomas, and Elijah Moore out of Ole Miss was there. Oh, well. Good for the Bucs.

Could the Panthers have gone with an offensive lineman like Rashawn Slater? Sure. And that would have been a decent pick, too. I thought the Panthers would have benefited from trading back to a QB-needy team like Washington, or even New England. But, they stayed at no. 8 and took the first corner off the board, Jaycee Horn (son of Saints receiver Joe Horn) out of South Carolina. I like the pick, as the Panthers’ secondary is very much a weakness, and with guys like Mike Evans, Julio Jones, Michael Thomas, Calvin Ridley, and D.J. Moore in the division, they need to have some good cover corners.

Kyle Pitts is going to be a superstar at the NFL level, and the Falcons could very well end up scoring 30-plus points per game if everyone stays healthy. Matt Ryan still can sling it, and running it back with him seemed like the right move. Let’s be honest; the Falcons aren’t winning the NFC South anytime soon. But they have a much better shot at the Wild Card with Pitts, Julio Jones, and Calvin Ridley running routes for the veteran QB.

The Eagles managed to trade back and get a first from Miami, then traded up to no. 10 (only giving up a third-round pick) to get the guy they wanted all along. I am incredibly high on Devonta Smith, and I think the Eagles found a superstar. He won the Heisman for a reason. I love this pick for the Eagles, and I think Philadelphia QB Jalen Hurts will have a very productive year because of this pick.

Gregory Rousseau is a beast. Why he fell to no. 30 is beyond me. The Bills got a steal in this pick, as he’s one of the most athletic and long pass rushers in this draft. There was a huge temptation to go running back, and the Bills rightfully ignored that (because it’s stupid to take a running back in the first round, I’ll expand on that later) and took a great player at an incredibly important position.

Everyone and their mother knew the Jets were taking BYU QB Zach Wilson. The big question is what else they’d do. And they traded up to get USC guard Alijah Vera-Tucker. That second pick may not sound sexy, and it won’t sell as many tickets as drafting a wide receiver or running back would have, but protecting your rookie QB has to be the number one priority. And with last year’s first rounder Mekhi Beckton out of Louisville looking like a slam dunk, the Jets have the left side of their line secured for years to come.

Goodness. It has become an annual tradition for Jon Gruden to reach for a guy that no one expected to go as early as the Raiders draft them, and this year was an extreme one. Tackle Alex Leatherwood certainly fills a position of need for the Raiders, as their offensive line is going to be made up of almost entirely new starters following an offseason where they traded Rodney Hudson and Trent Brown, but his value at no. 17 was awful. I mean, most mocks had him going late in the second round, not even late first round, and the Raiders took him in the middle of the first. Just brutal.

The Bengals are my favorite AFC team due to Joe Burrow being awesome, and while I like pairing the former LSU QB with his college teammate (and dynamic playmaker) Ja’Marr Chase, I’m afraid it doesn’t matter. The Bengals needed an offensive lineman more desperately than any other team in this draft. Burrow is coming off a brutal ACL and MCL tear that happened because of their awful offensive line. Now, they’re compounding the problem by not addressing it. A second or third round talent simply isn’t going to do it, and they still have a lot of needs on the defensive side of the ball. Sigh. Maybe they’ll mercifully trade Joey B to the Bucs after Brady retires.