A celebration happens at Julian B. Lane Riverfront Park. 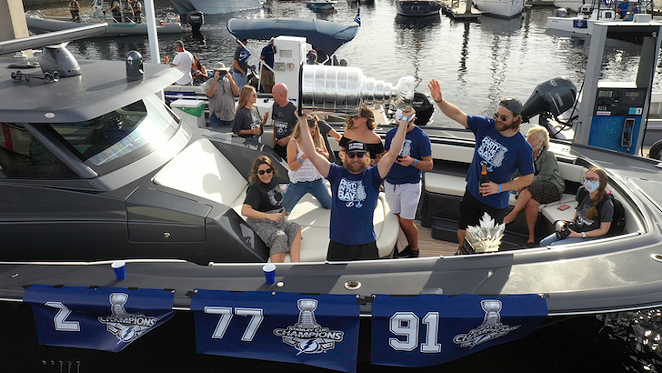 You may want to skip work on Monday, July 12 because that’s when the Tampa Bay Lightning’s 2021 Stanley Cup boat parade is officially going down.

Tampa Mayor Jane Castor—who wished a Game 4 loss upon the Bolts shared the news at a press conference today, adding that a big community celebration is set for around 2 p.m. at Julian B. Lane Riverfront Park.

The Lightning did lose Game 4, giving the mayor her wish, but the team clinched the Stanley Cup in Game 5 last night in front of nearly 19,000 fans at Amalie Arena.

Just like last year’s floatilla, the 2021 Stanley Cup boat parade will start at Davis Islands around 10 a.m., cruise around channelside and Water Street, then up river past Armature Works before arriving at Rick’s on the River around noon, where the team will board trolleys and busses.

Unlike last year—when the party went from Rick's to Raymond James Stadium—the 2021 Stanley Cup celebration is happening at Julian B. Lane, located at 1001 N Blvd., starting around 2 p.m.

Castor said there'll be food trucks and live music at the park, which opens to fans at 9 a.m.

Fans who wanted a parade over the weekend got an answer about scheduling, too, as Castor told reporters that Lightning owner Jeff Vinik wants to see his son get married over the weekend.

"We wouldn't be having this parade without the person who made it possible—and that is Jeff Vinik," Castor said. "So we're going to make it on his schedule."