Tampa filmmaker Maurice Jovan looks for laughs and commercial success with 'W.D.E.D. Dead in the Morning'

The local radio personality admits he was conflicted about making a comedy instead of a straight horror movie. 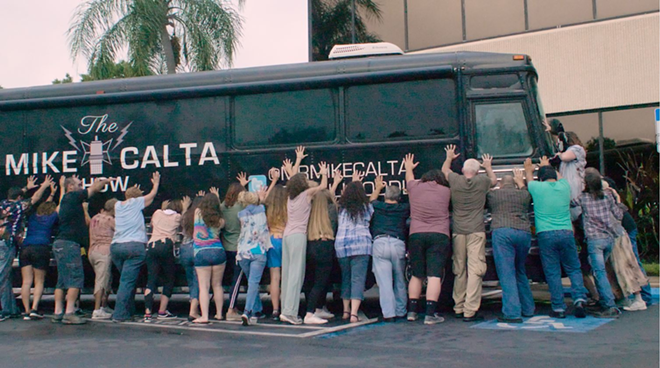 Spike Slater
Instead of angry listeners, zombies attack a bus to eat 102.5 The Bone's Mike Calta in "W.D.E.D. Dead in the Morning"

Let’s talk about “W.D.E.D. Dead in the Morning,” the first feature film from Maurice Jovan, aka A Cat Named Mo.

Jovan is a well-known on-air personality in Tampa with 102.5 The Bone’s “The Soul Brother Kevin Show,” and a long-time veteran of stand up comedy.

Given his background as a humorist and social commentator, it makes sense why his movie is being promoted as a zombie comedy. The main plot, for lack of a better qualifier, focuses on a ragtag group of morning radio hosts who must band together to thwart an unexpected uprising of the living dead.

The reality, however, is that “W.D.E.D.” is a very tough film to critique because much of its “humor” is derived from sexist, racist and homophobic jokes, rants and put-downs, and for the fact that there really isn’t much of a story to dissect.

If you go to YouTube and watch Jovan’s 2017 short film, “The Purgatorist,” which I strongly recommend, it’s clear that he knows what he’s doing behind the camera. His 10-minute, black and white meditation on grief, suicide and being forever trapped in limbo is impressive, and Jovan displays a true artist’s eye when it comes to framing and blocking scenes for maximum impact.

Those talents are not as readily apparent in “W.D.E.D.,” which plays like the most expensive gag reel ever made for employees and fans of talk radio.

If you don’t listen to or work in radio, many of the inside jokes about morning shows, program directors and expensive on-air talent will likely soar over your head. More importantly, for anyone outside of Tampa who doesn’t work at, or listen to, 102.5 The Bone, the constant shout-outs and putdowns of popular personalities like Mike Calta, Galvin, John Brennan and Spanish, aka Anthony Polichemi, likely will land with a thud.

So what exactly was Jovan going for with “W.D.E.D.”?

“I always describe the film as ‘Clerks’ meets ‘Shaun of the Dead,’” he said following a recent private screening.

The difference is that both “Clerks” and “Shaun of the Dead” had something to say about young men taking responsibility and stepping into adulthood, whether as a result of being forced to come into work on their day off or having to fight back a horde of flesh-eating monsters.

There’s no such underlying message in “W.D.E.D.”

As a result, Jovan’s script paints with a broad brush, picking low-hanging fruit at every turn. Skunk Weed’s only attribute is that he smokes, eats or vapes marijuana constantly. Hot Sauce rages against social injustice, accuses every Caucasian male he meets of being a white supremacist and rips apart beloved film franchises like “Star Wars” and “Alien” for being overtly racist. To be fair, Caswell does have the best line in the movie ("I'm a black man in a Nickelback shirt, you don't know what I'll do"), but his character needed more nuance to be truly funny. 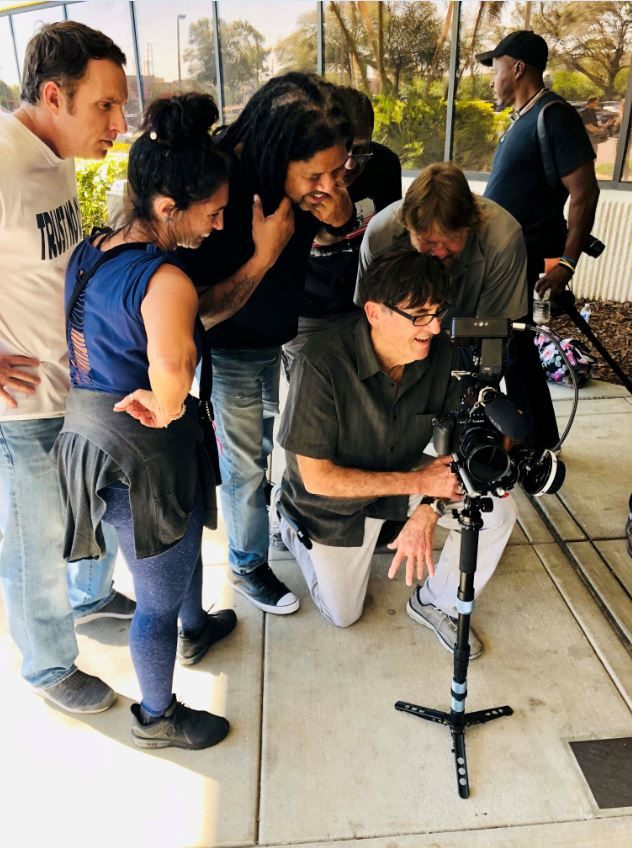 Spike Slater
Maurice Jovan, center, looks on with Curtis Graham, cinematographer, and other cast and crew while filming "W.D.E.D."

To hear Jovan tell it, however, he set out to make a very different movie.

“I wanted the film to be a lot scarier,” he confessed, but he said he eventually realized, “it was never going to be the scary horror film I wanted.”

Jovan said by the second day of shooting, it became clear that the comedic elements of the script were overshadowing the horror elements, and he had to make a choice to dial down the horror.

Clearly, it was a difficult decision.

Several days after our face-to-face interview, Jovan reached back out to Creative Loafing Tampa Bay through his publicist with the following statement: "I have such a love of horror films and when I saw that the comedy aspect of the film was the dominant side, I decided to make the horror more whimsical because there's nothing worse than a scary film that lacks true scares."

Normally, such creative decisions might serve to allow a director’s vision to flourish. But Jovan never wanted to make a funny movie. In fact, he confided that despite 25 years doing stand up, comedy is actually his least favorite film genre.

“I gravitate to darker material,” he said. When he realized he had no choice but to change gears, he decided that if he had to make a comedy, “I’m going to give you a comedy, I’m not going to hold anything back.”

Maybe that’s why so much of the humor in “W.D.E.D.” doesn’t work. It feels forced because it was.

Maybe that’s also why Jovan decided it would be funny to quote himself in the first “W.D.E.D.” trailer, saying the following:

They should dig up George Romero, bring him back to life, and show him what a f*cking zombie movie looks like.

“That’s been very problematic for me,” Jovan admitted after the screening. “It’s such an outlandish statement, I thought people would get the joke.”

The online backlash, he said, was swift and fierce, including horror fans telling him to basically go fuck himself. Filmed over a two-year period and financed for less than $30,000, “W.D.E.D.” is still very much a work-in-progress. Less than a week after the screening, Jovan’s publicist reached out to say that eight minutes of footage had already been removed to quicken the pace.

While he’s yet to secure a distributor, Jovan is confident that “W.D.E.D.” is perfect for Netflix or Amazon Prime. He hopes showings at the upcoming Gasparilla International Film Festival and Sunscreen Film Festival will bolster the movie’s chances to get picked up.

Regardless, he made it clear he’s going back to his roots if he makes another movie.

“This is my one shot at a comedy because I don’t want to do another one,” Jovan said. “I would like to do a legitimately scary film. I’ve exorcised laughter out of my system. Now I want to scare the shit out of people.”

John W. Allman has spent more than 25 years as a professional journalist and writer, but he’s loved movies his entire life. Good movies, awful movies, movies that are so gloriously bad you can’t help but champion them. Since 2009, he has cultivated a review column and now a website dedicated to the genre films...
Scroll to read more Events & Film articles