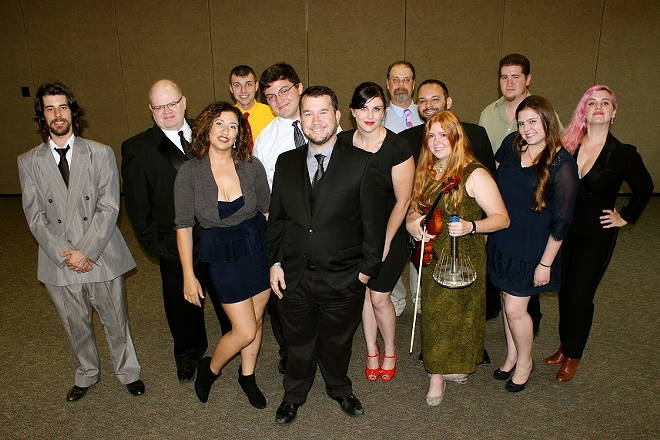 Dressed in black and white, the cast of voiceover actors and foley sound effects artists of TMI: Tales of Mild Interest were easily the best-dressed cast at the inaugural Tampa International Fringe Festival. Fashion sense aside, the live radio-style show written by local theater performers Jesse Hutson and Erica Garraffa had the audience laughing, groaning, shaking their heads, and eating out of the palm of their hands with the first pompous British lines of Lord and Lady Pendleton in “Pendleton Park,” a Downton Abbey-like dramedy.

In addition to "Pendleton," the TMI cast presented two other tales. "The B-Team!” starred a squad of disorganized superheroes you call only when the real superheroes are busy — Sgt. Strikes, The Dung Beetle, The Incredulous Shrug, The Lone Wolf and the Realtor — who must fight their nemesis Mr. Moneybags to save Victory City. And in "Swampy Gunderson: Dracula Hunter," a grizzled swamp-hobo Dracula hunter infiltrates a California public high school and adopts an unwilling sidekick to “heart stake Draculas in the heart.”

The show was on point, the characterizations were perfect, and the puns were, dare I say, punny. TMI is episodic theater which I’d be happy to tune into next time.