The docuseries hopes to bring national and international attention to assist artists' visions in being seen and heard. 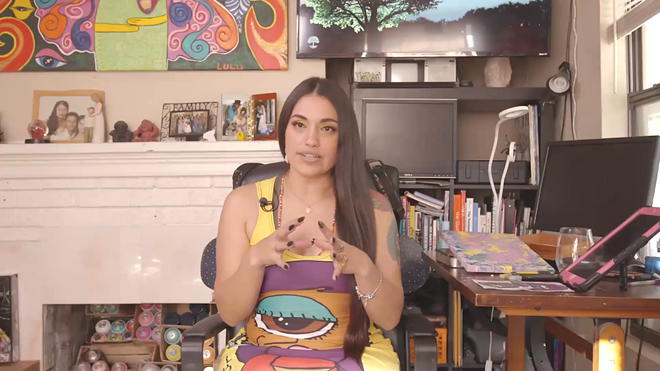 Photo via Tampa Arts Alliance/YouTube (Screengrab by Creative Loafing Tampa Bay)
Artysta Lulu, a visual artist known for her colorful graphics, is just one Tampa artist interviewed in a new series.
Visit Tampa Bay and the Tampa Arts Alliance have joined forces to bring attention to local artists by putting them on screen.

The agency and nonprofit have produced a YouTube docuseries highlighting the perspectives of five Tampa Bay artists and releasing a new new video every week. Two installments are out now.

"The Arts In Tampa," is produced in conjunction with filmmakers Charlie Diaz and Brooke Eschenroeder (collectively known as Video Shampoo) and so far features comments from locals like artist Ya La'Ford, a well known contemporary artist, Artysta Lulu, a visual artist known for her colorful graphics, Dean Mitchell, known for his visual art, Nick Ewing, a musician, and Christina Acosta from Hillsborough Community College's dance department.
The Tampa Arts Alliance formed in 2021 and is highlighting the need for more representation for Tampa's underground arts scene. Artists are the heart and soul of Tampa Bay, and are central to Tampa's culture of creativity. The docuseries hopes to bring national and international attention to assist artists' visions in being seen and heard.

Part of being seen and heard is having a roof over your head, and one goal of the videos is to help persuade local decision makers that giving artists affordable living options should be a priority.

The Tampa Arts Alliance is working with the Artspace Tampa Initiative to help create a more affordable living and working climate for artists and is currently finished with the pre-development stage and working on site identification. One of the first steps in accommodating local artists was a 2021 Creative Space Needs Survey which gathered information from local artists gauging needs, input and the volume of interest being expressed by the community. The first round of necessary fundraising is already complete. A recent meeting at the Columbia saw Artspace, the Tampa Housing Authority, reps from the City of Tampa, and community leaders discuss the next phase in discovering a site location.
"It's encouraging to see the importance and significance of art being highlighted, preserving a culture" La'Ford says in one of the "The Arts In Tampa" videos.

She is known for her work in the Tampa Bay area including her "Golden Wave" at the Morean arts center in St. Petersburg and her new sculpture "The Apex" set to debut at Hillsborough Community College. Her art style shows its power through geometric shapes, harsh lines, and monochromatic color schemes. In her appearance, La'Ford discusses the difference between private art and public art, and the importance public art has to a community.

"Tampa is in the middle of a renaissance. It's a place that's encouraging the upliftment of art and artists, making art a destination for people to come here and to take art seriously" said Ya La'Ford.

This docuseries doesn't only draw attention to artists, but to Tampa as a whole, highlighting the impact art has on the value and integrity of the city itself.