Tampa's Heather Theatre paints a portrait of Rothko in Red

Dialogue and paint slung in a thought-provoking two-character bio-drama about artistic genius and ambition. 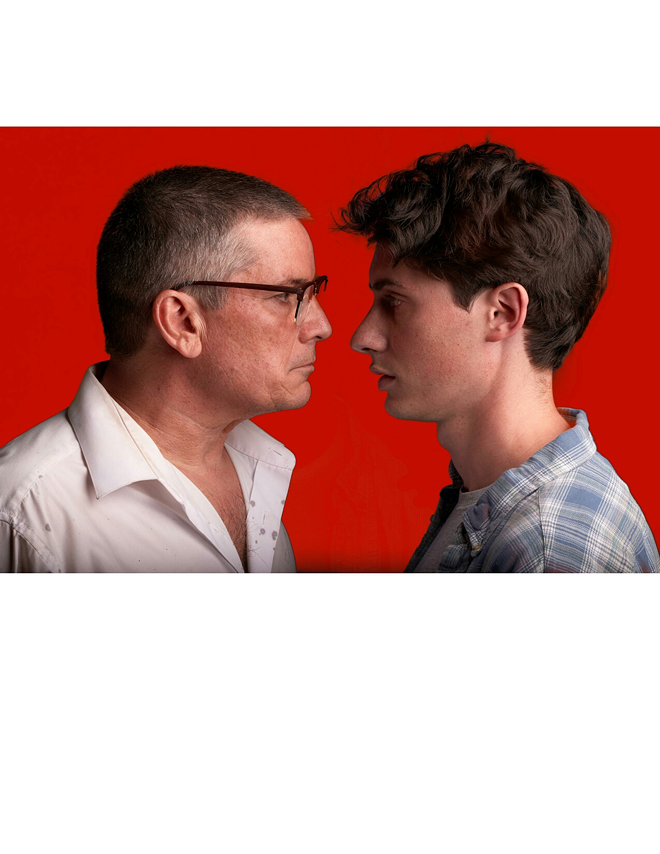 Making art — like giving birth — can be a bloody endeavor. There’s enough red paint on this stage, and on the artists, by the end of the evening, we’re not sure if it’s birth or murder that’s taken place. Likely both.

Red by John Logan is a brilliant evocation of the artist at work, and though there’s a lot of talking about making art — a lot of talking— there’s also a lot of actual doing it. Well before the the play opens, before a word has been spoken, we see a tarp on the floor, spotted and clotted with red paint, evoking, of course, blood, whether from violence or from birth, we shall see. And the opening scene is just a silhouetted artist with a glowing red cigarette as he studies the canvas.

We soon learn that “most of painting is thinking," and Red gives us a lot of both — painting and thinking — in this idea-rich play.

Mark Rothko (Ward G. Smith), noted abstract expressionist known for his paintings with big blocks of pulsating colors, has taken on a huge mural commission for the Four Seasons Restaurant in the Seagrams Building in New York. We’re in the top echelon, stratospheric art world here with architects Mies van der Rohe and Philip Johnson selecting Rothko for this important work. He needs an assistant, so has hired Ken (David Schneider), a young man — a kid, actually — as paid lackey to prepare the canvases, mix the paints, buy cigarettes and Chinese takeout, and just be around generally to take the boss’s demanding tirades and explosive bullying. Oh, by the way, Ken is also a painter, eager to ingratiate himself with the big guy, eager to learn from the master, eager just to be in Rothko’s presence and absorb something, anything through artistic osmosis.

One of the great pleasures of the evening in this intimate black box theatre is watching this duo sling paint and sling dialogue in equal measure.

It makes for an explosive time, the lines flying fast and furiously after kicked into action with Rothko’s question to the boy, “What do you see?” Red asks us to stare at a painting, “lean into it” as Rothko says, until it reveals itself. At one point, the actors stare at the fourth wall as if staring into a painting, in the process of course, staring right into the audience. Even the lights are brought up so they can see the painting in more direct light, so the audience is fully, eerily illuminated too. It made for a disquieting theatrical moment where Rothko and Ken were studying us just as we were studying them. It's increasingly evident that Rothko didn't like the viewer, or anyone really, very much at all.

Rothko just wants someone to tell him how great he is and mix his paints, don't disturb or distract my genius because “I’m not your rabbi, teacher, father, friend.” He veers into the pompous as he comments that when people tell him his paintings are pretty, he wants to vomit. Yet, yet, he takes this commission for a mural — to be situated in a restaurant, no less — and says he wants to ruin the patrons' appetite. As Ken grows into his own, no longer disarmed by the genius in front of him, he reminds Rothko that this Four Seasons is but a temple of conspicuous consumption where diners would likely not at all be interested in a mural on the wall. The only thing they’re leaning into is the steak tartare and a couple of martinis. The boy challenges the man about this perverse lapse where Rothko’s genius is to be in service, if not servitude, to the appetites of wealthy gourmands.

The dialogue crackles with electricity, with lots of laughs along with the philosophical disquisition, and these two actors handle these roles as if born to them. Smith as Rothko is alternately charming and blustery, a genius with a fragile ego and a load of doubt. He compares himself to Rembrandt and Caravaggio and proclaims he has “the flashiest mural commission since the Sistine Chapel.” No lack of ego there. Schneider as the callow youth is endearing, vulnerable, impressionable, a boy standing up to the man in claiming his own right not just as an artist, but as a human being, to confront Rothko and his pretensions. It takes Ken to remind Rothko that just as the abstract expressionists like him and deKooning and Pollock defied and killed the Cubists before them, now comes the newbies on the art scene like Lichtenstein and Warhol to kill the father again and again.

Thus it has ever been in the art world, and in the real world. And it’s happening on stage here before our eyes.

You may think you have stumbled into an art history class, and indeed, these two guys throw around artists' names and movements at lightning speed, expecting you to keep up with them. But it’s not like that boring lecture in art appreciation you had back in college. Ward and Schneider move and paint and gesture and connect and disconnect with one another with such fluidity, it’s like layering a Rothko painting until the canvas really does vibrate.

In fact, there is a finished Rothko facsimile as part of the set design. In an exchange afterwards with Smith, he told me that he painted that canvas himself as part of the rehearsal process to help him learn his lines. As they talk and paint and talk and talk, there are occasional LPs on the turntable playing music from Vivaldi to Cannonball Adderly. With a rotary phone in use too, the set design by Malaika Hollist and Kit Taylor drops us back into the world of the 1950s.

In a mesmerizing scene of actual painting on stage, the two men furiously prepare a canvas in red priming paint, Vivalidi’s “Summer” movement from Four Seasons urging them on, faster and faster, crossing back and forth as they cover the huge canvas, as much paint on the actors as on the canvas. They both are bloodied giving birth to this new thing. It’s a powerful evocation of what it means to create. And it is the perfect backdrop for the men’s spirited discussion of the Apollonian/Dionysian opposition, that perennial contrast between the cool intellect of order and design of Rothko with the frenzied, feverish excess of splattering like Jackson Pollock.

Director Roxanne Fay has managed to create a coherent world of artistic ambition and moral ambiguity on this tiny stage. She has taken this brief play of 75 minutes without intermission and given us an entire world in a nutshell.

My only regret is that I wanted to see and hear it all over again immediately. Though both actors finished the evening in a sweat, let them take a brief fifteen minute break, get the stage cleared, then do it again. Let those rat-a-tat lines, those strings of 10 adjectives, the rapid-fire dialogue, the come-backs and witty repartee be flung again so we can absorb and marvel and relish how words on a page can become alive and funny and electrifying when two performers create art in front of our very eyes and ears.