The former Tampa Sportatorium is also on the chopping block if Tampa City Council approves rezoning on Sept. 22. 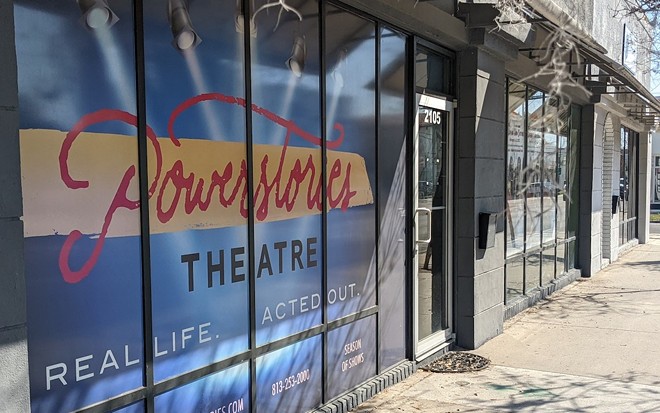 Photo via Powerstories
A 23-year-old Tampa theater company is asking city council to keep a developer from tearing down its playhouse.

Tomorrow, Thursday, Sept. 22, Tampa City Council is supposed to decide on a request to rezone property on W Kennedy Boulevard, which includes Powerstories Theatre and the former Tampa Sportatorium, a professional wrestling studio used by Championship Wrestling from Florida.

Powerstories told Creative Loafing Tampa Bay that if the applicant gets its way, the professional, woman-owned theater and businesses around it will be leveled.

The theater company’s founder, Fran Powers, is asking the community to join her and others from Powerstories at 5 p.m. inside Tampa City Hall where they’ll ask councilmembers to pump the brakes on rezoning.

"It's absolutely devastating to have survived two years with our doors shut to the public, never missing a rent payment during the pandemic, to finally see the light at the end of that very long tunnel, to reopen our doors for an amazing 22nd season only to have light at the end of the tunnel be a train,” Powers wrote. “We literally had the rug ripped from beneath our feet. We just announced our coming 23rd season, and just a few weeks later, we learn if rezoned, we don't have a theatre to host a 23rd season."

Powers said her landlord, Nicholas Nakos of Phalanx Property Investment, is a good guy whose company is probably also just coming out of COVID woes, but says businesses on the block are thriving.

“We do not want to be erased after 22 years,” she added. "We are not just nameless property zones CG and RM-16. We mean something and have value to our community.”

Nakos, or an attorney listed on the rezoning application, have yet to return calls from CL. We’ll update this post when they do.