The Bucs are officially an awful football team

But they could become one of the worst division winners in NFL history. 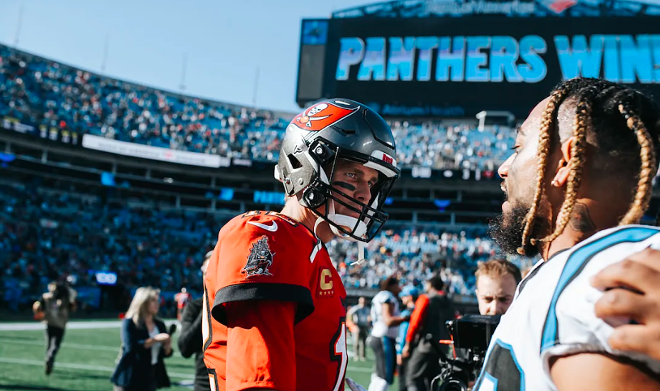 Photo via Carolina Panthers
Late in the fourth quarter, with the Tampa Bay Buccaneers were down 21-3 and about to get the ball back for another unproductive possession for Tom Brady and a sorry-ass offense. Mercifully, linebacker Genard Avery committed a roughing the punter penalty,  and the Carolina Panthers were able to run a bit more time off the clock to get a boring, uninspiring game over with.

For the second consecutive week, the Bucs gave another team their second win of the season by losing to the Carolina Panthers.
Follow @ctbrantley12 on Twitter and listen to him on the RBLR Bucs podcast


Brady's offense has now been shut down by two teams with a single win. He's also starting to look more and more like an immobile Ryan Tannehill.

Right now, Tampa Bay is a very bad football team composed of a bunch of has-been football players seemingly still hanging onto a Super Bowl they won two years ago.

The Bucs were shut out through three quarters and only scored three points in the fourth. They've scored just a single touchdown in the past two games. On Sunday, Tampa Bay ran for 45 yards while giving up 173 rushing yards, continuing the trend of the Bucs being the worst rushing team offensively in football.

Good news is that the game ended pretty early, as it only lasted a little over two-hours and 45-minutes.

In just a few days, the Bucs take on the Ravens this Thursday at Raymond James, and the Bucs are playing to stay in first place in the NFC South, as they’re only a game up on both the Panthers and the Falcons—two teams who have no business being in any kind of divisional race. Still, teams led by Marcus Mariota and PJ Walker are now in contention for the playoffs.

Amazingly this is a Bucs team that, despite looking like utter dog shit and getting dog walked by two teams who probably won’t break the five-win threshold for the year, could still win the NFC South. They could become one of the worst division winners in NFL history.

So at least there’s that.

Brady should not have unretired. He should have gone back home to his supermodel wife and saved his marriage, but instead, he came back just to be outplayed by PJ Walker, Kenny Pickett, and Mitchell Trubisky over the span of two weeks. Bucs backup Kyle Trask could have done that.