Be warned, monsters, mutants and femme fatales are on the way.

Paramount Pictures
Ssssh! Don't make a sound, but, from left, Noah Jupe, Millicent Simmonds and Emily Blunt return as the Abbott family in "A Quiet Place 2."

It used to be accepted that the period from January to the end of April represented Hollywood’s version of a fetid dumping ground where movies that otherwise might go direct-to-DVD were released with limited fanfare.

But in recent years, the box office model has been upended by studios delivering blockbuster titles like “Get Out,” “Black Panther,” “Captain Marvel” and “Fifty Shades of Grey,” all before May.

That’s not to say that there aren’t still a lot more duds than diamonds, but even lower-budget genre films seem more so today to be successful during the early months than in decades past.

That’s why it’s hard not to get excited about a slew of movies hurtling down the pipe between now and late April, well before the summer blockbuster season officially kicks off.

Here’s a look at eight promising titles that hopefully live up to their buzz: No one probably expected a sequel to 2016’s “The Boy,” which was a weird gothic chiller about a creepy doll. But longtime horror director William Brent Bell’s film earned cult status, despite grossing less than $36 million overall, and so he and returning writer Stacey Menear have concocted what looks to be an even creepier, mythology-rich study in fright starring Katie Holmes.

After 2017’s spectacular failure, “The Mummy,” one of Tom Cruise’s rare missteps, the fate of Universal’s planned Dark Universe, which was set to re-introduce all of the studio’s classic monsters, seemed in doubt.

Now, three years later, writer-director Leigh Whannel (“Saw”) is adopting the Marvel Studios approach (see 2008’s “Iron Man”) by using a less-popular monster than Dracula or Frankenstein to hopefully kickstart a new revival for creature features. It’s hard to argue about the casting with Elisabeth Moss or the creative team, powered by Blumhouse Productions, and the storyline, which focuses on an abusive relationship, is both timely and ripe for generating genuine dread. “Bloodshot,” a movie about a super-soldier with regenerative nanites in his blood, based on a Valiant Comics character from the early 1990’s, might not seem like a sure bet. Just don’t tell that to Vin Diesel, who stars in this adaptation by first-time director David Wilson, which was co-written by Jeff Wadlow (“Kick-Ass 2”) and Eric Heisserer (“Bird Box”). You might think with the ninth (!?!) “Fast and Furious” movie set to roll out in May, that Diesel has enough money by now, but we think what he really wants is to launch a franchise on his name value alone.

Cash-grab sequels have been a staple of Hollywood for decades, but “A Quiet Place 2” is that rare film that legitimately deserves a second helping. Director/co-writer John Krasinski’s 2018 original was the cinematic equivalent of snorting six rails of cocaine and then having to sit still for two hours. It was an unrivaled, nerve-shredding exercise in silent terror, but there was so much story left untold.

“A Quiet Place 2” brings the entire gang back together, including Krasinski, his wife Emily Blunt and their two on-screen kids, and promises to provide answers about the monsters and how the world went quiet to survive. Plus, did you see the first trailer? Holy crap, why can’t we be watching this now?

Long before Disney swallowed Twentieth Century Fox, and re-acquired the rights to some of Marvel Studio’s most iconic heroes, including The X-Men, director Josh Boone (“The Fault in Our Stars”) was filming an adaptation of “The New Mutants,” which is based on the Marvel comic series from 1982. Billed as the first Marvel horror film, “The New Mutants” boasts a great cast (Maisie Williams, Anya Taylor-Joy and Charlie Heaton, just to name a few) and introduces a host of new heroes (Wolfsbane, Magik, Cannonball, Mirage and Sunspot). The only concern? Principal filming ended in 2017, the initial release date in 2018 was bumped and reshoots happened last year. Fingers crossed this doesn't suck.

Emerald Fennell was already a household name among TV geeks after writing six episodes from the explosive second season of “Killing Eve,” but her directorial debut, “Promising Young Woman,” arrives with its manicured nail firmly fixed on the zeitgeist of the last decade. Her revenge tale stars Carey Mulligan as a woman who had the world at her disposal until a mysterious event changed her trajectory. Now, she may or may not be luring predatory males to a spiritual and physical comeuppance by pretending to be a victim. Et tu, #MeToo?

Fox Searchlight Pictures
Keri Russell screams in frustration because "Antlers" won't be in theaters until April.

Writer-director Scott Cooper came out swinging with his first film, “Crazy Heart,” which scored Jeff Bridges a much-deserved Oscar and won best original song. Since then, he’s worked with Christian Bale, Casey Affleck and Rosamund Pike. But this, his first foray into horror, looks genuinely terrifying, not to mention it’s based on a short story by Nick Antosca (“Channel Zero”) and includes David S. Goyer and Guillermo del Toro as producers. “Antlers” is poised to be a breakout creature feature, and I’m not just saying that because Cooper and I were college friends way back in the day. 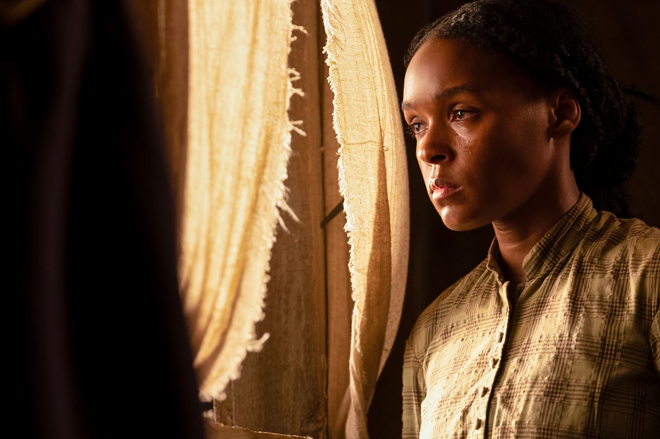 Matt Kennedy
Janelle Monáe takes top-billing in "Antebellum." We'd say more, but no one knows what the movie is about yet.

“Antebellum,” the first feature from writing-directing duo Gerard Bush and Christopher Renz, stars Janelle Monáe as a famous author who suddenly finds herself transplanted and trapped in a horrific new reality. There hasn’t been a lot disclosed about the film, but based on the trailer and publicity photos, it looks safe to say that “Antebellum” is going to revisit a turbulent period in Civil War-era history when all people were not free citizens, and life for many was a waking nightmare. If it all comes together as hoped, this could be 2020’s answer to “Get Out.”