The Flick: Despair in a run-down cinema 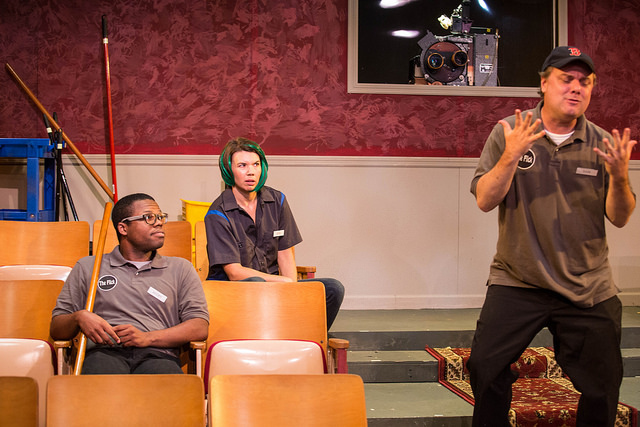 The world is a pretty tough place in Annie Baker’s eyes. If her Pulitzer Prize-winning play The Flick is to be taken as evidence, excrement and refuse and missed connections are the order of every day, and the consolations most people look to — love and friendship, for example — are punctually marred by impotence and betrayal. The play’s bleakness shouldn’t put you off — the fine Jobsite Theater production currently showing at the Straz Center gives us many opportunities to laugh — but the laugh is on all of us who know too well the taste of failure and thwarted hopes. Fortunately for Baker’s characters (and for us), there are some glimmers of victory in the otherwise forbidding landscape. Sometimes good emerges from evil; sometimes the impossible comes within reach. But in general, the world of The Flick is a fallen one, and its characters have no choice but to muddle through best they can. Maybe it’s not too far-fetched to call their endurance heroic.

The setting of the play is the audience section of a small movie theater in central Massachusetts (persuasive set by Brian Smallheer) and our three protagonists are Sam (Brian Shea), whose job is to clean the rows and aisles between shows; Avery (Thomas Morgan) a new hire with the same assignment; and Rose (Georgia Mallory Guy) the projectionist using one of the last 35mm apparatuses not yet replaced by digital. As in her earlier plays Circle Mirror Transformation and The Aliens, Baker lets us get to know her characters slowly, through seemingly minor interactions that build upon each other until finally a clear portrait arises. That portrait eventually looks something like this: Sam is a sad sack frustrated in his job, devastated that he hasn’t been promoted to projectionist, and possessed of feelings toward Rose that he dares not articulate. Rose is a mystery to herself, can’t stay in a relationship beyond four months, tends toward sexual predations, and skims (along with Sam) a little money off the top of the theater’s’ receipts. As for Thomas, he’s sexually damaged, formerly suicidal, obsessed with movies but baffled by reality. As these three face crises from a bathroom smeared with filth to a possible uncovering of embezzlement, they take on a significance far beyond their rather menial jobs. By the end of the play’s three hours (about a half-hour more than absolutely necessary) they acquire dignity and real pathos.

As so often, Shea’s acting is a reason to attend the theater. His Sam is a deeply feeling shnook who in one of his most powerful moments announces that dealing with “shit” and “puke” — literally and metaphorically — is all too well within his skill set. Shea’s talent is so formidable, he easily makes us see that his ambition to work the projector is of the same size and intensity as Macbeth’s drive to be king, or Caesar’s to be Caesar. Whether physically expressing his jealousy over Rose’s attentions or refusing to look at Rose when she’s shouting at him to do so, Shea’s Sam is always neurotic, desperate, clinging to happiness without ever believing that his grip on it can last. He’s surely a candidate to turn into Eliot’s J. Alfred Prufrock once he has just a few more years under his belt.

Guy’s performance is also airtight. She’s the only character on stage who’s not afraid of what she desires, and she’s so much more powerful than Sam or Avery, it’s a wonder that she finds either of them worth her trouble. But then she tells us her bitter truth: That she doesn’t understand why she’s so sexually forward, just as she can’t figure out why all her relationships go bad. Morgan as Avery is usually topnotch, though at some key moments toward the end of the play, he doesn’t quite rise to the pitch the script demands of him. Still, before that he’s excellent, presenting a sturdy-enough image to the world in order to hide his inner brokenness, and delighting in his movie knowledge as the one area where he’s in no danger. Summer Bohnenkamp’s staging is, even for a long play, efficient, and Katrina Stevenson’s costumes — including polo shirts with name tags and the logo “The Flick” — are just right. The expressive lighting is by Ryan Finzelber.

If there’s anything less than winning about The Flick, it’s a certain predictability in its modernist angst. After all, “Prufrock” was first published in 1915, “The Wasteland” in 1922 — in a way, this desolation is old hat in 2017. Still, if Baker’s not staking out new territory in her drama, she’s doing a creditable job in the usual precincts. Which is another way of saying, The Flick has its rewards. It’s good to finally meet Sam, Avery and Rose.