The Great Wall? How about the "sort of OK wall"? 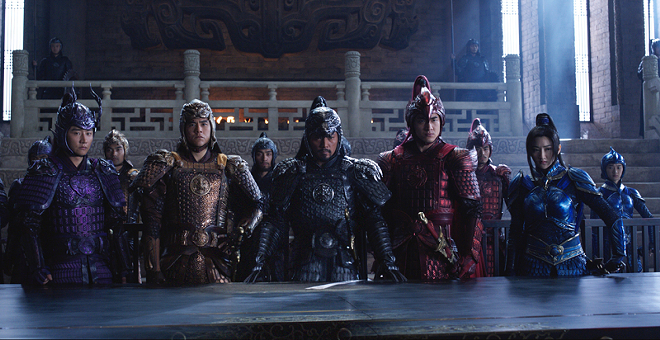 You likely know Chinese director Zhang Yimou from elaborate wuxia epics like 2002’s Hero and 2004’s House of Flying Daggers. Over his 30-year career, Zhang took his time to rev up from material like 1991’s vivid concubine drama Raise the Red Lantern and 1999’s neorealist Not One Less to his sumptuous martial arts movies.

Recently, he’s hit a bit of a slump. In 2011 Zhang directed The Flowers of War, a historical drama about the 1937 Nanjing Massacre. Interestingly, the film’s lead was neither Chinese nor Japanese, but Christian Bale, who gets a corny redemption arc as part of Zhang’s questionably stylized, morally childish rendering of the massacre.

The Great Wall is Zhang’s latest film. It is, essentially, a 100-minute version of the Helm’s Deep siege from The Two Towers (sub quadrupedal monsters for Orcs) and it stars a handful of non-Chinese actors alongside Chinese cinema mainstay Andy Lau and a clutch of pop stars and up-and-comers.

Zhang has argued that focusing on the presence of Matt Damon, Pedro Pascal, and Willem Dafoe ― who are not, for what it’s worth, intended to be Chinese characters ― is to overlook that The Great Wall is a film about Chinese folklore with a largely Chinese cast being made at “tentpole scale.” That is, it has the potential to make a lot of money worldwide.

True enough. In fact, Damon et al. are so extraneous to the story that they feel edited in during post-production in order to appeal to a broader audience, like Raymond Burr in the 1956 American version of Godzilla. But, somehow, this isn’t the case.

The opening crawl informs us that the story of The Great Wall is “one of the legends” surrounding The Great Wall of China, which is roughly true. But slathered in a generic Ramin Djawadi score and shot by two separate DPs (one a Zhang regular) from a threadbare screenplay scraped together from three credited writers (including Damon’s Bourne partner Tony Gilroy) and three separate “story by” people ― none of whom are Chinese! ― it lacks something in, uh, local flavor.

Zhang directs in two distinctly separate styles. He handles the action nicely; the fights flow, in a way you might not expect from the humans-vs-monsters setup. The CG elements are actually really solid, thanks to assists from ILM and Weta. Zhang’s characteristic eye for color enlivens the Pacific Rim-esque monster designs and pops up in idiosyncratic elements like the matching, dragonfly-shimmer armor that each human faction wears to signify their combat function: an iridescent blue here for the Crane Corps, a squad of acrobatic rappelling spearwomen, a luscious crimson there for the neat, long rows of archers.

When it comes time to unload some story (of which there is, mercifully, little), Zhang appears to have gotten it done in as few takes as possible. More than once, he cuts on a line of dialogue, as if Matt Damon couldn’t deliver a line for the life of him. Maybe he can’t? I don’t know. The seams show all over the place; Zhang pulls off several sinuous long takes and manages CG-live action fight scenes with aplomb, but the editing when two people are just talking is appalling stuff.

Again, though, at just over 100 minutes there’s not a lot of fat. Zhang’s eye for capturing smoke, fire, moonlight, fog, and dust―not to mention a finale soaked in a hundred shafts of prismatic light―is leagues beyond your typical Legendary Pictures hackwork. There are worse ways to burn an hour-and-a-half: some of them are in theaters right now.