The new Doctor Who has a vagina. Let's all get past it, shall we?

Apparently being a female is worse than being an alien. This is news to no woman anywhere. Babbel1996 via Wikimedia Commons/CC
The current Tardis. Rumor has it a woman can use it just as well as a man (and can probably find it faster, too).

When the BBC announced on July 16 that the next Doctor Who — lucky number 13 — would be actress Jodie Whittaker, the internet lost its collective shit. A vagina? Say it isn't so! How dare they.

Seriously, Twitter took a break from the usual arguments about healthcare and Russia to alternately bemoan how the first female doctor (well, that we're seeing as the audience — some evidence suggests the Doctor has manifested as female before) would ruin the series and laughing at the people who think gender really matters when you're a extraterrestrial Time Lord.

This is our favorite so far (created by Sarah Harding Roberts):

Of course, there are some asshats out there, too (complete with super-awesome spelling): 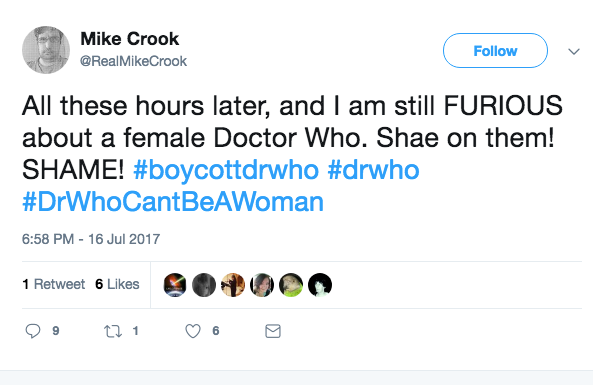 Boycott Doctor Who? Sigh. For shae.

But at least some people are taking the #DrWhoCantBeAWoman tweet and having the kind of fun we've all come to expect from Twitter, complete with social commentary:

...and most of them make us laugh, like this:


Look, folks, at the end of the day, it's science fiction. Zaphod Beeblebrox had three heads. James T. Kirk went on to tell us all how to get cheap car rentals. Holly has appeared as a man and a woman (and met the tenth Doctor, as well). These things happen. If it upsets you so much, I suggest you go ahead and hone your writing skills, sharpen your imagination, move to the UK, intern at the BBC, work your way up through the ranks, get a job in the writers room for Dr. Who, and write something better. Good luck with that, by the way — I hear there's a real shortage of men who want to write science fiction for the network that arguably does it better than any other in the world.

If you need me, my vagina and I will be binge-watching old episodes, plotting world domination and waiting for the next Dr. Who.