'The unit is a dump': Gronk now knows what it's like to rent in Tampa

"This unit is a dump since the day I moved in. It was the only option at the time," said Gronk.

Nicole Abbett
One of the more appealing things about four-time Super Bowl champ Rob Gronkowski is he really does pull off the "normal guy" persona, and it just so happens that getting screwed by a shitty landlord is one of the most normal things that can happen to anyone in Tampa.

Last week, Gronk's former downtown Tampa rental, a 4,462 square-foot penthouse in  the Towers of Channelside complex, went on the market for $5.4 million.

According to the Tampa Bay Business Journal, Gronk reportedly lived in the space from 2020-2022, which is also when he earned his Super Bowl LV ring alongside Tom Brady.

But now Gronk is saying the place is a "dump," and he doesn't want to be be affiliated with the sale. 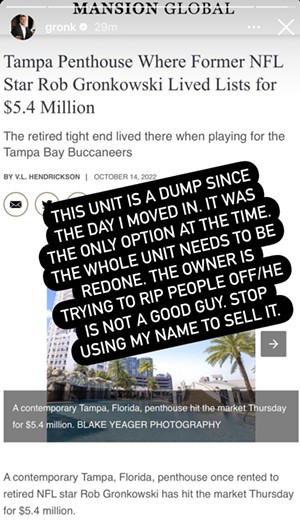 The former Bucs tight end recently posted a screengrab of an article from Mansion Global about the sale of the condo to his Instagram stories.

"This unit is a dump since the day I moved in. It was the only option at the time," said Gronk in the post.  "The whole unit needs to be redone. The owner is trying to rip people off/he is not a good guy. Stop using my name to sell it."

Gronk didn't specify exactly what needed to be redone with  the penthouse, or why the owner is a "bad guy," or even why he thinks it's "a dump."

But if that's the case, Gronk isn't the first (and he certainly won't be the last) person in Tampa to reportedly experience the wrath of a negligent landlord.

There are plenty of reasons Tampa is one of the absolute worst cities in the nation to be a renter, but one of the biggest offenders in the area is bad landlords, and shady property management groups, who often have zero issues with letting tenants live with mold, pests and "brown sludge."

The big difference is most renters in Tampa aren't living in a unit that comes with four bedrooms, five bathrooms, and a 1,000-square-foot wraparound terrace.

But at least it's comforting to know that one of the wealthiest and largest people in Tampa also hates renting here.

If you're having issues with a landlord or property management company, have questions about evictions, or need any other housing assistance, the City of Tampa actually provides a Housing Information hotline with operators available Monday through Friday, from 11 a.m. to 7 p.m. 813-307-5555.

Rob Gronkowski's former Tampa penthouse is now on the market for $5.4 million

Colin Wolf has been working with weekly newspapers since 2007 and has been the Digital Editor for Creative Loafing Tampa since 2019. He is also the Director of Digital Content Strategy for CL's parent company, Euclid Media Group.
Read More about Colin Wolf
Scroll to read more Sports & Recreation articles