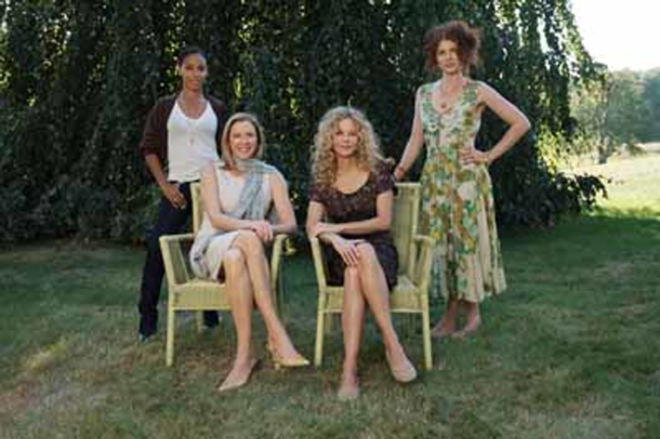 Courtesy Picturehouse Entertainment
LADIES FIRST: Meg Ryan (center) turns to her gal pals when she discovers her husband's a cheater in The Women.

Cartoonist Alison Bechdel, creator of the memoir Fun Home and the comic strip "Dykes to Watch For," coined an elegant approach to finding female-friendly movies. In a 1985 installment of the strip, a character mentioned that she only watches a film if:

3) About something besides a man.

Writer/director Diane English's remake of The Women scores high on the Bechdel Test. The cast features no men at all, just A-list actresses such as Meg Ryan and Annette Bening. The title characters do little but talk to each other, although their other primary activities involve the buying, wearing and even the designing of clothes. And, hey: Some of their conversations don't involve men whatsoever!

George Cukor's original version, adapted in 1939 from Clare Booth Luce's hit play, shows some of its age and takes a little too much pleasure in portraying females as either catty gossip junkies or plaster saints. It's nevertheless fast and funny enough to be a prime example of vintage screwball comedy, a film genre far more satisfying than the contemporary chick flick.

A relative novelty in 1939, movies about female friendship have become far more common thanks to the success of films such as Steel Magnolias and Sex and the City. The latter clearly informs the remake while throwing the need for an explicitly man-free movie into question. English botches her attempt to bring The Women into the 21st century, and substitutes weak jokes and mushy uplift for the original's spirited, if sexist, wit.

The Women's alpha female is Sylvia Fowler (Bening), the sharp-tongued, unmarried editor of a fashion magazine. Before she shows her face, we see her point of view Terminator-style as she shops at Saks Fifth Avenue. A gabby manicurist tells Sylvia that a perfume-counter hottie, Crystal Allen (Eva Mendes), is sleeping with a well-known financier — the husband of Sylvia's best friend, Mary (Ryan). Mary and her friends' aghast reaction contains some snobbery: "A spritzer girl?"

The revelation makes Mary question her storybook marriage, which features a palatial suburban house, undemanding design career and spunky young daughter Molly (India Ennenga). Mary's friends rally around her, although her mother (Candice Bergen) cautions Mary to keep mum to save her marriage. Ryan seems unable to shed her cutesy, America's-sweetheart shtick, so she sends Mary on a fairly dull journey to self-actualization. Essentially, she makes a "What do I want?" scrapbook and, once she's finished, everything falls into place with the ease of a fairy tale.

The Women provides a slightly more complex portrayal of contemporary femininity as Sylvia struggles with work pressures and an apparently shatterproof glass ceiling. Bening can primp amusingly in a mirror, but also delivers in the film's rare weighty moments as Sylvia makes painful compromises to her principles. Plus, Bening's bonding moments with young Molly provide the sweetest, least predictable beats in a film that's shackled to chick-flick stereotypes.

English should know her way around clichés, having created Murphy Brown, a sitcom that streamlined feminist issues for the TV audience and even prompted a public feud with then Vice President Dan Quayle. English's writing hasn't evolved since the show debuted in 1988, however, and The Women's wisecracks creak. Mary complains about the meals at a women's rural retreat: "You need the Hubble Telescope to see what's on our dinner plates."

The Women definitely needs some kind of high-tech optics to resolve its ideas of how women should perceive themselves, which should be the primary justification for a man-free film. Characters pay lip service to the idea that bad media messages undermine feminine self-esteem. Beanpole Molly frets that she's fat, while Sylvia wants to launch a smarter magazine less enslaved to appearance and youth. The Dove Campaign for Real Beauty affixes its seal of approval to the film and teases an online ad after the closing credits.

But the film offers a suspiciously idealized view of female appearance. The zaftig ladies from the Dove ads prove conspicuously absent among the film's body types, unless you count Bette Midler's noisy cameo. When Ryan and Mendes confront each other while wearing lingerie in a dressing room, Ryan's cleavage holds its own against Mendes' more youthful frame: They're both practically perfect. As Mary's housekeeper, Cloris Leachman may be the film's only actress unashamed to show time's effects on her face.

The film holds up Mary and her pals as "real women" (including Debra Messing and Jada Pinkett-Smith), but they're all attractive celebrities playing roles who have no trouble affording an exorbitant, name-brand New York lifestyle. The Women endorses the same kind of label-porn as Sex and the City, and the closing credits thank so many designers, it's like the endless scroll of special effects technicians after a sci-fi epic. The Women's true ideal turns out to be Saks Fifth Avenue, a temple that preaches the gospel to go forth and spend, spend, spend. Perhaps the Bechdel Test should be amended to deduct points for rampant materialism.