This mother-daughter duo — who have never seen the movie — loved The Little Mermaid at the Straz.

Bernetta Knighten
Opening night of The Little Mermaid at the Straz Center in Tampa, Fl.

If I am completely honest, I have never seen the movie The Little Mermaid. However, I do know the name of the main character and have learned two of the movies famous songs, "Under the Sea" and "Part of Your World."  I just didn’t know the storyline.

When I was given the opportunity to take my daughter to the opening night of Disney’s The Little Mermaid at the Straz Center in Tampa, I jumped at the opportunity.

This story is about a mermaid, Ariel, whose father, Triton, is the king of the sea. Ariel is the youngest of seven, but somehow she feels she doesn’t fit in. She fascinated by humans and wants to walk upon the land among them. While swimming near the surface, she happens to save Prince Eric when he falls off of his boat — and her life is changed forever. Ariel meets the love of her life and gives up everything, including her amazing voice, to the sea witch, Ursula, to be in the presence of her prince for three days on land — with legs.

Here are three reasons why your children will love this play: 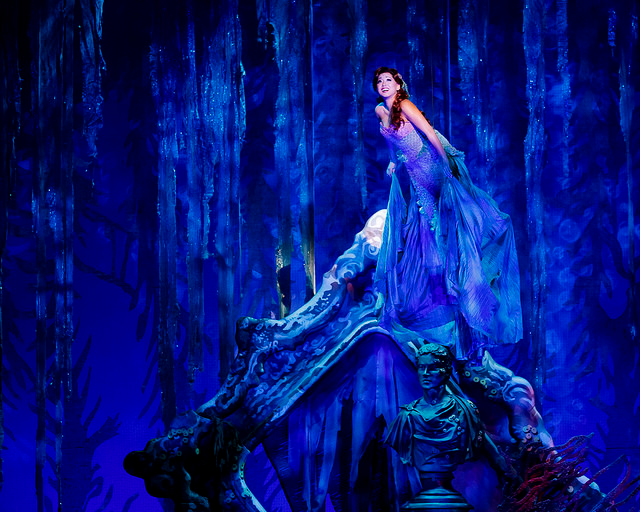 The set design really made you feel like you were in a magical kingdom under the sea. The actors even moved like they were fish with wave motions. Some of the actors had harnesses to simulate flight or swimming. All of the special effects, lighting, costumes and choreography were excellent. My daughter was glued to this performance and with all the set changes in front of your eyes, so was I. They went back and forth from sea to land with ease. I loved how when the prince fell off of the boat, you little see him floating under the sea and Ariel swimming to his rescue.

This play was more like a musical; it seemed like it was a song every three minutes. These amazing musical numbers told the story of Ariel (Diana Huey). What I didn’t know was the stage play included all seven original songs from the 1989 animated movie, as well as 10 new songs by Menken and lyricist Glenn Slater. The singing was paired with fun choreography. Many of the laughs from the crowd came during a song.

The lesson for my daughter was always go for what you want and that everyone who smiles at you doesn’t always have the best intentions. Jennifer Allen is magnificent as the villain Ursula, but she is also Ariel’s aunt and steals her voice. It also always good to have the support of friends, like Sebastian the crab, played by Melvin Abston. He was given the task of making sure did she the right thing, but ended up supporting her dream because he really cared for her. I told my daughter that this play definitely makes me want to go back and watch the original movie. It was a great story of love, family, friendship and of course following your heart.

The theatre was packed with mothers and daughters in their Little Mermaid costumes ready to make new memories. If you’re looking for a fun family summer night event, this is a good one.