Tempus Projects is leading the way in the burgeoning Seminole Heights arts scene. 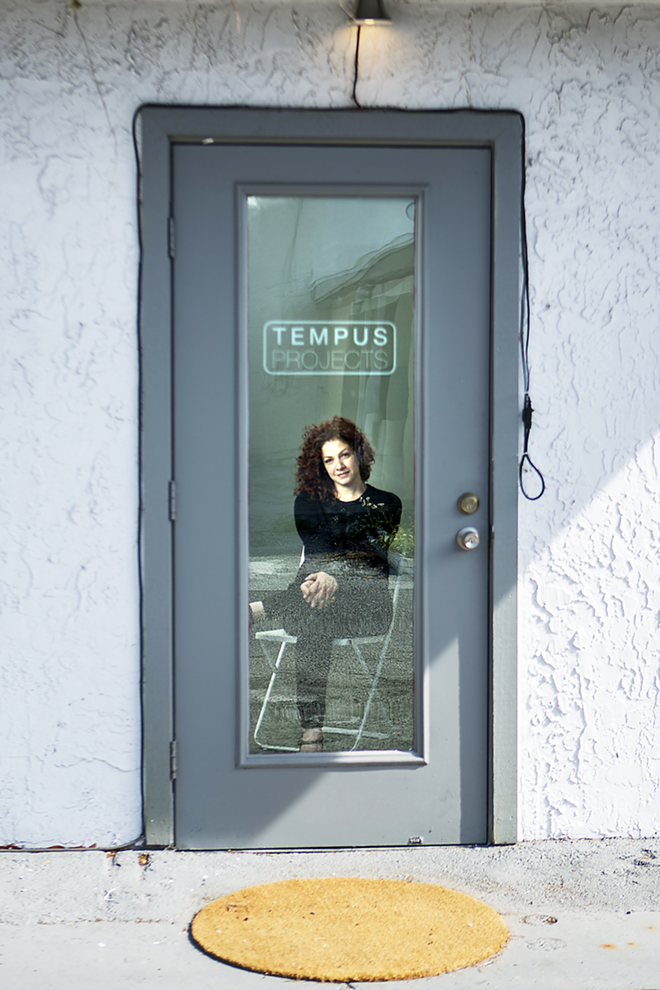 Ask Tracy Midulla Reller how long her Florida Avenue art gallery, Tempus Projects, has been staging exhibitions in Seminole Heights, and she may stop to consider a moment before answering — three years.

“We have three Best of the Bay awards now,” she says. “That’s how I tell time.”

In 2009, Reller went in search of a space to house [5]art, a collaborative gallery run by a handful of artists that had hopped around locations in Ybor and West Tampa since 2006. Reller, who hoped the gallery might land closer to her home in Seminole Heights for convenience’s sake, happened upon a diamond in the rough — a stand-alone garage behind an industrial warehouse just a stone’s throw from Cappy’s Pizza. (The Independent would open next door the following year.)

[5]art had other growing pains — the group split up shortly thereafter. But Reller thought the garage was too good to pass up, so she rented it and founded a new gallery, Tempus Projects, on her own. (Some former [5]art members stuck around to help, but the bulk of the responsibility landed on her shoulders.) Since then, the white-washed garage gallery — like Cappy’s or the Indy — has become an aesthetic calling card for Seminole Heights. Packed with hipsters, artists and academics on any given opening night, along with the occasional toddler and a few dogs, Tempus embodies the neighborhood’s reputation as Tampa’s budding destination for the creative and curious.

“I can’t imagine doing what we’re doing in Ybor or West Tampa at this point,” Reller says. “There’s more neighborhood pride and community in Seminole Heights.”

Though Sem-Hi has never been populated with enough galleries or artists to rival downtown St. Pete, the neighborhood has long been a landing place for artists. Sculptor Susan Gott’s Phoenix Glass Studio, established in the early 1990s on Knollwood Street, may deserve the title for longest-running and most consistent art venue — when Gott isn’t crisscrossing the country to attend art fairs, she hosts regular glass casting demos. Artist Kirk Ke Wang uses his building on Florida Avenue near Tempus Projects to make large-scale sculptures and pop art-style paintings. Before he bought it in 2003, the same space was known briefly as Gallery On Florida, where Cat Thompson — a sculptor, printmaker and life-long Seminole Heightsian — organized exhibitions for a year.

And then there was Covivant.

Housed in the converted auto repair shop where Microgroove sells records today, the gallery and artists’ studio complex was Carrie Mackin’s labor of love for nine years. After graduating from USF’s art school in the late 1990s, Mackin wanted a means of continuing to be immersed in art while contributing to the city’s art scene. (Like Wang and Thompson, she cites Titanic Anatomy and the Florida Center for Contemporary Art, two organizations active in downtown Tampa and Ybor in the early ’90s, as inspirations.) Through 2006, Mackin organized more than 100 exhibitions in the space, featuring a broad range of local and international artists — and developing a rep along the way as a sexy badass who doesn’t take any shit.

“The neighborhood is great for a one-to-three year experiment, but it doesn’t serve a gallery to stay there,” she says.

Part of the success of Tempus may be due to the fact that Reller (also a sexy badass, incidentally) works a day job teaching art at HCC’s Ybor campus, rather than depending on the gallery to make a living. In 2012, she took the step of incorporating Tempus Projects as a nonprofit and assembled a board of directors who aspire to help the gallery become self-sustaining. The prospect of a better location for business has enticed Reller to explore options downtown, but for now she’s staying put. Foot traffic in Sem-Hi has begun to pick up, and the myth that well-to-do South Tampans don’t travel north of Kennedy isn’t altogether correct.

“I think we have people from South Tampa and from North Tampa. I don’t think we have enough of either of them,” she says. “It’s time for them to get with the program and hop in their cars.”

Another artist-driven change afoot just might trigger such traffic. Becky Flanders, a recent USF MFA grad whose erotically charged photographs about gender are well-known in Tampa Bay, already co-owns the Mermaid — Seminole Heights’ new favorite bar — with partner Lux DeVoid. Last Christmas, she purchased a 37,000-square-foot complex of buildings in east Sem-Hi that she plans to turn into a cluster of studios for artists and artisans: a maker’s village. The majority of units within the complex require renovation and won’t be complete for up to 18 months, Flanders says, but they’re already reserved. And the two spaces that are ready for occupancy are home to two studios — one for Jason Hulfish, a commercial artist who makes themed environments for children, and one for sculptor Taylor Pilote, whose work was recently exhibited at Tempus.

Pilote says snagging a studio in the nascent village was a no-brainer: it’s cheap, close to home (Seminole Heights) and work (USF), and just might be the start of turning Seminole Heights into an art neighborhood akin to Miami’s Wynwood.

“It needs a lot of TLC, but it could be awesome,” he says.