You have two more chances to see the one-person play this weekend in Ybor City. 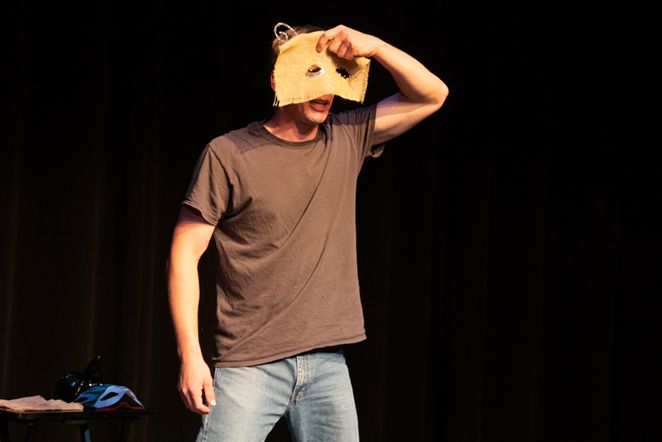 Jennifer Ring
Jordan Bertke’s latest epitomizes what Fringe celebrates: having the cajones to stage a new concept in front of an audience when all you have is yourself and maybe $20 to spend on prop

There are about 15 characters in Jordan Bertke’s superhero parody, “The Sack: A Play on Superheroes,” and Bertke plays them all. But don’t worry, you’ll know who’s who from the mask Bertke’s wearing. Sort of. It’s kind of hard to keep track of 15 characters when they’re all being played by the same person, but that’s part of the fun.

These one-person shows epitomizes what Fringe celebrates: having the cajones to stage a new concept in front of an audience when all you have is yourself and maybe $20 to spend on props. As every great Fringe performer knows, when it’s just you up there, you’ve got to bring a good concept and a lot of energy to make it work. Bertke’s doing both with “The Sack.”

Bertke started writing “The Sack” in 2019, around the same time he was performing “Double Blind Date” at the 3rd Annual Tampa Fringe Festival.

“I always thought it would be amazing to play a superhero or supervillain myself, and I was trying to come up with my next play idea,” Bertke told Creative Loafing Tampa Bay. “Since ‘Double Blind Date’ was about to go up, it was time to get ready for the next one.”

“I really love the action sequences and the different abilities that they have,” Bertke told CL. “I always have enjoyed, ever since I was a little kid, just imagining what I would do if I had these abilities myself. And I think that's a big part of what draws me to superhero movies and TV shows and comic books.”

What he’s not crazy about is how repetitive these films are, so Bertke parodies that in “The Sack,” which won Best Solo Show-Comedy at Orlando Fringe earlier this year.

There’s a lot to love about Bertke’s superhero The Sack. First off, his superpowers are “above-average bravery and below-average judgment.” With a combination like that, you know hilarity is bound to ensue. The Sack does more than just fight villains and foil criminals in the fictitious town of Mega City. He also comically roasts his nemeses with a combination of put-downs and laughably bad puns, made extra funny by Bertke’s voice work and rapid-fire delivery of lines.

Watching Bertke perform in front of an audience at Tampa Fringe, it’s clear that he’s enjoying himself. Bertke’s first Fringe encounter was in Ybor City, where he performed “The Friendzone” at the 2nd Annual Tampa Fringe Festival in 2018, the same year he graduated from USF’s Theatre program. He’s been Fringing hard ever since.

“I've been writing plays for a long time and I've always wanted to produce them,” Bertke told CL, when asked what keeps him coming back to Tampa Fringe year after year. “When I finally was able to put a show up and have people come to see it, it was just the most exciting feeling in the world for me. It's pretty much my proudest moment, having one of my plays staged. That rush of having people pay to see my work and applaud it and everything was so exciting and fun, that's what kept me doing it.”

Tampa Fringe is a great place for theater students and recent grads like Bertke to try out new concepts. Sometimes, when I watch one-man shows like this one, I wonder what the show’s future is. Will it go on to become a larger production with a full cast of characters or will it inspire something different down the road?

“I would like to do it as an ensemble piece someday because a big thing that I wanted to feature was stage combat,” Bertke told CL. “Of course that had to go by the wayside with it being a one-man show. Sometimes I think about being a high school theater teacher someday, and I think, 'Well, I could tone it down a little bit so it's a little more appropriate for high schoolers.’ A large cast always works there, because every student gets a role.”

At this moment, Bertke says he’s just going with the flow.

I would love to be able to make my living continuing to write and perform my plays,” he says. “That would be the dream. I would love to grow Airtight Theatre, which is the company I produce the plays under, into something bigger. Right now, it's pretty much just me doing shows at Fringe with the name, but I'd love for it to become a true theatre company someday, with a location, and maybe produce shows other than what I've written."

Whether it’s big or small, performed by high school students or a professional theater company, I look forward to seeing more of Bertke’s plays in the future. Meanwhile, I recommend you go see this one.

Theater is expensive, and Creative Loafing Tampa Bay devotes editorial budget to writing about it because it’s essential to cover local playwrights, actors and the venues that support them. Support arts journalism in these crazy days and consider making a one time or monthly donation to help support our staff. Every little bit helps.