St. Pete Women's Collective to honor closure of its 'Venus' studio with a farewell event next month 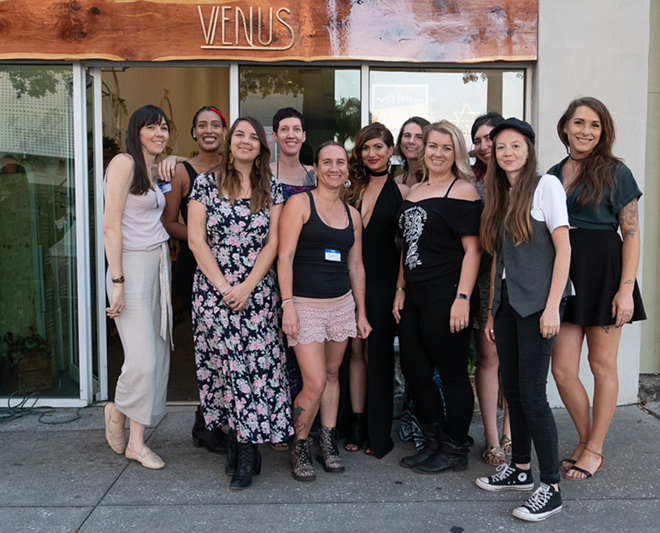 Jennifer Ring
The St. Pete Women’s Collective has been hosting art-centered events, gallery exhibitions and fundraisers out of various locations since 2017, but its 5-year run will unfortunately come to an end in a few weeks.

Earlier today, the collective announced that its downtown St. Petersburg home base Venus will close next month and host its final sidewalk sale and art show on Saturday, Jan. 22.

“As St. Pete continues to gentrify, we face rising costs on all goods and services. Our landlord has been an impeccably supportive partner throughout. But like many other local small businesses, the time has come for us to close our downtown doors,” Venus’ Facebook reads.

Nestled in-between the brand new Black Radish Grocer and the shuttered Coney Island Sandwich Shop in the Fringe District of St. Petersburg, Venus was part art studio, part shared office, part library and part event space that operated under the mission of uplifting  the voices of creative women.  Throughout its five years in existence, the collective provided countless artists with studio spaces and has hosted over 150 community-centered events, self-described as a “ DIY labor of love.”

Venus defined itself as “an incubator for conscious creative community facilitated by the nonprofit St. Pete Women's Collective,” and will be able to celebrate all it has accomplished at next month’s final event. It's not just the downtown studio space that will close, but the collective itself will disband and go their separate ways, as confirmed by longtime board member Mitzi Gordon.

1 article
The St. Pete Women’s Art Collective was created in 2017 by six women— Ashley Sweet, Emily Stone, Jeanette St. Amour, Jodi Chemes, Gordon and Tiffany Elliott—and has remained a grassroots, volunteer-run organization since. The collective was initially formed when Bloom Art Center permanently shut its doors and many of the founding members were left without studios, so perhaps Venus’ imminent closure will foster new beginnings , just as it did years ago.

Venus debuted in spring of 2019, and Creative Loafing’s Jennifer Ring did a deep dive into the women's' new chapter. Before the downtown St. Pete location opened a few years ago, the collective ran events out of a residential house in the Historic Kenwood neighborhood.

The collective's farewell Facebook post ends with “to everyone in the Venus community: Thank you from the bottom of our hearts. Thank you for showing up, for speaking up, for sharing your light, for co-creating and energizing this 1,600-square-foot slice of magic. We love you.”

Help say goodbye to the St. Pete Women’s Collective space next month, and stock up on some locally-made feminist art while you're at it. Follow Venus' Facebook and Instagram for more details as its final event inches closer.
Stay looped in with a small but mighty team that works tirelessly to bring you updates on events happening in Tampa Bay and surrounding areas by subscribing to our newsletter and following @cl_tampabay on Twitter.

Kyla Fields is the Managing Editor of Creative Loafing Tampa Bay who started their journey at CL as summer 2019 intern. They are the proud owner of a charming, sausage-shaped, four-year-old rescue mutt named Piña.
Scroll to read more Local Arts articles