Hey, it's the offseason, and these sports talk radio guys need something to argue about. 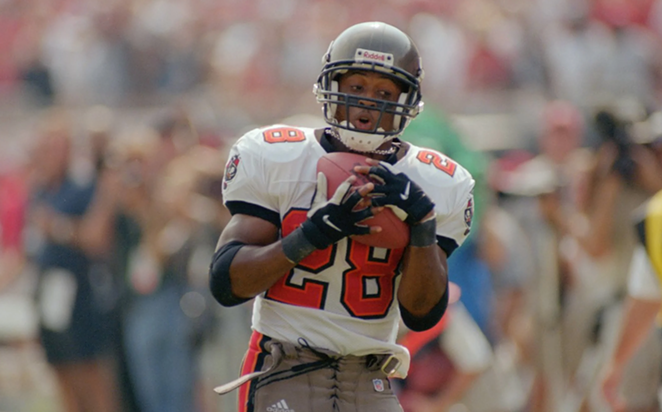 We’re getting to that part of the offseason where nothing is really happening, so why not mix it up and throw in an All-Time Bucs team?

We’ll break it down with a roster makeup of a QB, a running back, a fullback, two wide receivers, a tight end, five offensive lineman, three defensive lineman (including ends, interior lineman and edge rushers), three linebackers, two cornerbacks, two safeties, a kicker, and a punter.

With the Bucs’ somewhat inconsistent history (to put it generously), filling out these positions might be difficult. But aren’t all things worth doing a little hard?

This was an easy choice. The Bucs have never really had a great QB until TB12 decided to take his talents to Raymond James Stadium, and he immediately turned the Bucs into Super Bowl contenders. There aren’t any other QBs in Bucs history that can say that. Plus, his breaking of pretty much every single-season passing record this past year certainly helps.

It’s tempting to take the easy route and pick the Bucs’ All-Time rushing leader James Wilder for this spot, but considering the fact that Wilder played during those God-awful ‘80s days, his stats might be looked upon with a little less reverence. Dunn is not only third all-time in rushing yards for the Bucs, he also played during those incredibly successful Dungy years and made the Pro Bowl twice. Plus, you know, the guy does a shit ton of really great stuff off-the-field that makes things kind of hard not to like him.

While fullbacks are considered a dying position in the modern NFL, Alstott was one of the best during his playing career. Not only that, he’s good for second all-time on the Bucs’ rushing list. Alstott is certainly a fan favorite, and with good reason. He was a hard-nosed hard-working guy on the field that everyone could get behind.

This one was too easy. Evans has been one of the most productive receivers in the league since being drafted by the Bucs in the 2014 draft. His 8,266 receiving yards are good for first on the Bucs’ all-time receiving yards list, and the second place guy, Mark Carrier, is over 3,000 yards behind, making this a not-so-close call.

While Jackson is only fourth in the Bucs’ all-time receiving yards list, his time in Tampa was certainly cause for celebration. He was incredibly productive despite being on some incredibly bad Bucs teams with some horrendous QB play (remember Josh Freeman and Mike Glennon?).

Originally drafted by the Houston Oilers, Giles made a name for himself with the Bucs in the early-80’s, making four Pro Bowl teams and racking up over 4,000 receiving yards during his time in the creamsicle orange. Giles was also inducted into the Bucs’ Ring of Honor in 2011.

Now, Gruber isn’t a household name when it comes to left tackles, but he did start 183 games in a row when he played his whole 12-year career for Tampa. Poor guy. But, Gruber did make 2 All-Pro teams and was inducted into the Bucs’ Ring of Honor in 2012.

Marpet is still relatively young, so his inclusion on this list may come as a bit of a surprise, but his production is certainly nothing to sneeze at. He hasn’t been named to any Pro Bowl or All-Pro teams, but ask around the Bucs locker room, and Marpet is by far one of the most respected offensive lineman on the roster, and has been pretty much his whole career.

Another poor soul trapped on some very average-at-best Bucs teams in the early-to-mid 90’s, Mayberry made three Pro Bowl appearances while starting 145 games in a row at one point in his Bucs career.

Yes, this is the guy from that radio show on 620 AM (“The Ron and Ian Show”). Beckles was a great starting right guard for the Bucs in the early part of the 90’s before leaving the team for the Philadelphia Eagles in 1994. However, while Beckles was in Tampa the Bucs had running backs rush for 1,000 yards-rushing three times. Not too shabby.

Brother to Hall of Fame offensive lineman John, Charley spent six incredibly productive years in Tampa from 1977-1982 before leaving for the Raiders where he won Super Bowl XVIII.

I mean, he has his own highway named after him. One of the most prolific athletes in the history of Tampa Bay, Lee Roy was an absolute monster during his relatively brief nine-year career with the Bucs in their early history. He has six Pro Bowl appearances, five All-Team nominations, and was named as one of the members of the NFL’s 100th Anniversary team. Not much else to say.

Sapp might have been a bit of a loudmouth, but that’s one of the biggest reasons Tampa fans loved him. He was also a fantastic interior lineman, and a member of the 2002 Super Bowl championship team. The Bucs certainly would not have won it all that year without the 1999 Defensive Player of the Year, and the former Miami Hurricane was inducted into the Hall of Fame in 2013.

McCoy may be a bit of a polarizing figure when it comes to his production on the field (especially considering his selection at no. 3 overall in the 2010 draft), but his accolades certainly speak to a guy who was at the top of his game in a Bucs uniform. He racked up six Pro Bowl nominations and was named to five All-Pro teams during his time in Tampa.

Another no-brainer, Brooks’ career on the field is as impressive as they come. Brooks was one of the leaders of the 2002 Super Bowl team, and was a big reason for the Bucs’ success in early aughts. Brooks has also enjoyed an incredibly successful career off the field, both with his charitable work and with his work as president of the Arena Football League team, the Tampa Storm, from 2011-2017.

Calling David this generation’s Derrick Brooks might be doing a disservice to both Brooks and David; while their games are a bit similar, they both are different individuals who have brought some great leadership both on and off the field to the Bucs. David only has one Pro Bowl under his belt, but many agree that this is mostly due to his being on such awful Bucs teams throughout his career. I mean, he did have to play with Jameis Winston.

Named to the NFL 1990’s All-Decade team, Nickerson was one of the first big free agency signings in Bucs history. Nickerson came to Tampa from the Steelers and was an immediate contributor, making five Pro Bowl and four All-Team appearances while with the Bucs in the ‘90s.

Barber might be one of the most recognizable and well-liked Bucs players ever, and that’s saying something, especially with Derrick Brooks and Lee Roy Selmon being on this list. However, Barber’s play on the field was really second to none, leading the Bucs in interceptions for his career and leading the NFL in picks in 2001.

After Barber the list of corners gets a little… pedestrian. Enter Kelly. The former USC Trojan was never a Pro Bowler and didn’t really earn any other major accolades, but he was the NFL’s co-leader in picks for that magical 2002 season where the Bucs won the Super Bowl.

Now the General Manager for the 49ers, Lynch is one of the few players in NFL history to be inducted into both the Bucs’ and the Broncos’ Rings of Honor. His ability to fly around the field and make plays from the safety position earned him many accolades, but he’ll mostly be remembered for being another key part of the Bucs’ 2002 Super Bowl team.

Another career marred by the mess that was the Tampa Bay Buccaneers of the early-‘80s, Brown is currently third all-time on the Bucs’ interceptions list. Brown was selected in the 12th round of the 1976 NFL Draft by the Oakland Raiders but was part of the inaugural Bucs team that lost its first 26 games as a franchise.

Good old Matt Bryant. While I was tempted to go with Ryan Succop because he’s awesome, Bryant being responsible for the curse that fell upon the Bucs’ kicking game for the past decade is certainly notable (OK, maybe he’s not responsible, but the Bucs’ cutting of the solid veteran might be). Bryant had an incredibly successful career that spanned nearly 18 seasons, ending with the Atlanta Falcons in 2019.

The punter is certainly an underappreciated position, and while the Bucs haven’t really had any guys that stick out, Bidwell did have a year in 2005 where he made the Pro Bowl and an All-Pro team while wearing a Bucs uniform.