There are still some free agents out there who could slide in and steal the starting gig. 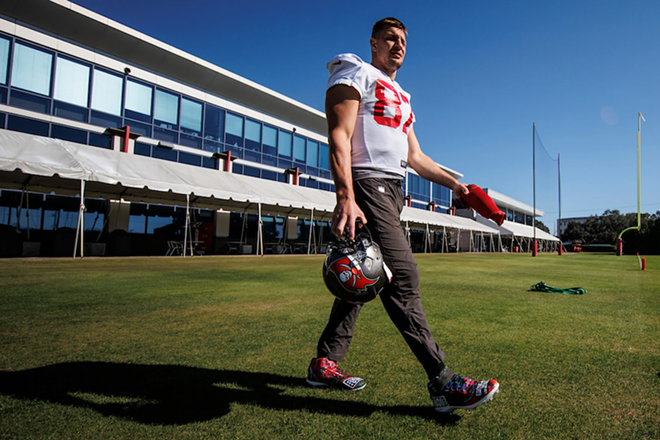 Kyle Zedaker/Tampa Bay Buccaneers
Rob Gronkowski
Obviously Cameron Brate is expected to be the starting tight end going into this season, and rightfully so. He’s an established presence who can bring some red zone presence to TB12.

With that being said, there are still some free agents out there who could slide in and steal the starting gig or even just serve as a serviceable backup for Brate if neither of the newly drafted tight ends impress in training camp.

The former Saint is mostly known by Bucs fans for his fumble in the NFC Divisional matchup that cost New Orleans the game, but he’s still a viable target that can get open in the right offense. Last season he certainly showed his age, with a drop in production across the board, but put him out there with Mike Evans and the GOAT and he could have a revitalizing year.

Phew, another past-his-prime, former Saint. Graham is certainly not who he was in New Orleans, and with his brutal injury history he might not be worth investing in, so this pairing seems unlikely. But, when Graham got to play with a technician like Drew Brees, he was certainly successful. Pair him with TB12, and maybe he can recapture some of that magic.

Ebron is another guy who has seen better days, as he lost his starting job with the Steelers last year to rookie Pat Freiermuth. His best season was spent as a Colt in 2018, where he made a Pro Bowl team while racking up 750 receiving yards. Since then he’s been on the downturn, with drops galore and not many bright spots. Maybe a change of scenery is just what the veteran would need.

Rudolph may haunt Saint fans’ dreams with that game-winning overtime catch he hauled in to give the Vikings a playoff win a few years ago, so the Bucs wouldn’t be totally unwise to sign the veteran. He spent last season in the Big Apple, playing alongside fellow free agent tight end Evan Engram in mostly a supporting role. But his play style is probably the most similar to Gronk’s as anyone on this list. He’s a great red zone threat, but doesn’t provide nearly the tremendous blocking that Gronk did. Plus he’s not a young buck at 32, and he played like it last season, only hauling in 26 catches for 256 yards.

This would be more of an upside pick, a guy to fill in for Brate who’s a little more proven than the rookies. He’s been pretty much nonexistent for half of his career, with 2 years of decent productivity. His rookie year he even eclipsed 500 yards receiving, but has yet to return to that form in his career. The Bucs could use a reclamation product on the bench, and Herndon is certainly that.