Turns out the rumors were true. 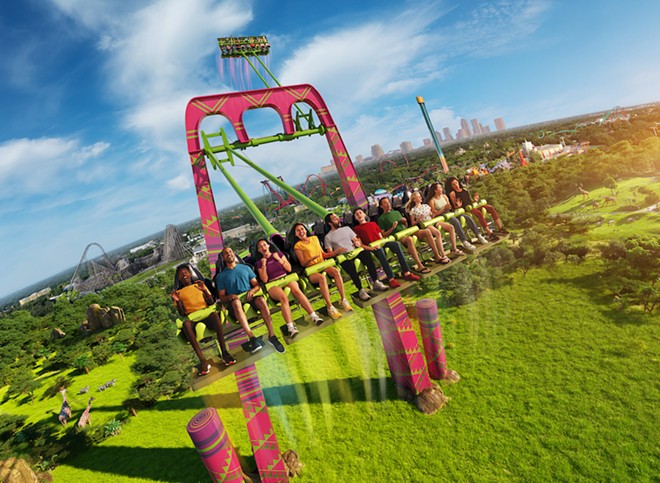 Billed as the "world's tallest and fastest of its kind," Serengeti Flyer will feature twin dueling arms that swing to speeds of 68 mph, and reach as high as 135 feet above the ground.

According to Busch Gardens, the ride features two gondolas, with one on each swinging arm. Each gondola seats 20 guests, who'll sit back-to-back in two rows.  In total, the new thrill ride can host 40 guests at a time.

Manufactured by S&S Worldwide, the rides were first introduced in 2004 and are technically called "Screamin' Swings."  Over the years, the thrill rides have become a popular choice for parks, mostly due to their relatively small footprint and high guest capacity.

As previously reported by theme park blogger Ken Storey, Tampa’s sister park, Busch Gardens Williamsburg installed an 80-foot tall Screamin Swing named "Finnegan's Flyer" in 2019. At the time of the purchase it was heavily rumored that parent company SeaWorld Parks & Entertainment bought multiple Screamin Swings from S&S, and that the second one would presumably end up in Tampa.

Turns out the rumors were true.

Busch Gardens told Creative Loafing Tampa Bay that Serengeti Flyer is located within the Nairobi area of the park and will occupy a portion of the space previously occupied by Rhino Rally.

No exact opening date was announced, but Busch Gardens says the new ride will debut in spring of 2023.

Colin Wolf has been working with weekly newspapers since 2007 and has been the Digital Editor for Creative Loafing Tampa since 2019. He is also the Director of Digital Content Strategy for CL's parent company, Euclid Media Group.
Read More about Colin Wolf
Scroll to read more Travel & Leisure articles