On Jan. 21 of this year, I spent the morning at the St. Petersburg Women's March. I spent the evening at Castile, getting engaged on the rooftop of Hotel Zamora.

There's simply no way I can look back and say "This year sucked" because it didn't. After almost a decade together, I married my best friend this past October, and we spent the weekend sharing a house on Treasure Island with my cousins. The New York Times interviewed me about my book, Backroads of Paradise, and I landed a second publishing contract. We put in a pool and finally finished the renovations on our home.

Does it sound like I'm bragging? Maybe I am — but trust me, other years haven't treated me so kindly, which is why I'm soaking this all in. Every year before this one has taught me to have gratitude for every experience; I know all too well how destiny can change with a single, seemingly inconsequential decision.

At the risk of sounding too Pollyana, even the dumpster fire that is the White House right now has its bright side: We know who the enemy is now. No longer do racists pretend to be anything other than what they are; all the pretense disappeared with our Make Americans Hate Again president. My friend Leah put it best: At least we know who all the assholes are now. Men raping and preying on women? It's hard to say that's a 2017 thing when it's literally been happening since the dawn of time, but finally — in 2017 — women took back their power and spoke out — #MeToo has brought down more male predators than I think any of us ever imagined possible. #theresistance as a whole has been amazing — from 92 percent of black voters turning out to tell Roy Moore, "Not today, Satan" to #altNPS. To quote a David Hoyt: "The thing the dystopian novels could never predict was the sudden rebellion of the national park social media managers." And congrats to Florida's own Everglades National Park for its part in leading the charge. 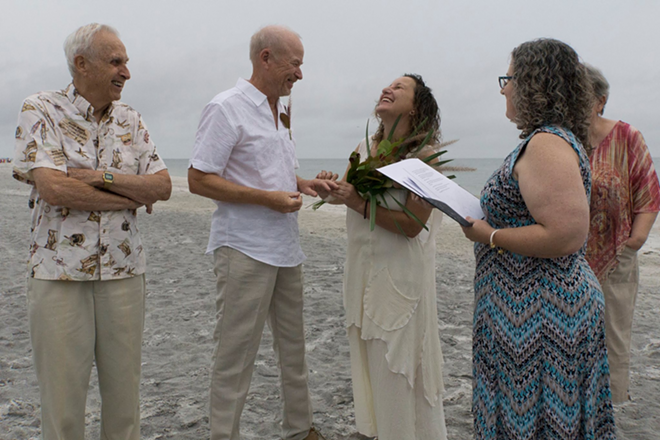 The year is over, but I'm looking toward 2018 holding on to the good of this year — and the lessons of the worst of it. The fight's only just started, but as long as we stick together and keep on yelling "This is not normal!" every time we see evil, we got this.

Years ago, I heard Elie Wiesel speak at Eckerd College and he spoke of a parable in which an old man stood on the street corner and yelled the truth all day. Passersby ignored him, but he did this day after day. Finally, a young boy approached him and asked, "Why do you yell like that? They do not listen; you will not change them."

"I do not yell to change them," the old man replied. "I yell to keep them from changing me."

Cathy Salustri is the arts + entertainment editor for CL Tampa and, clearly, a screaming liberal. Contact her here.